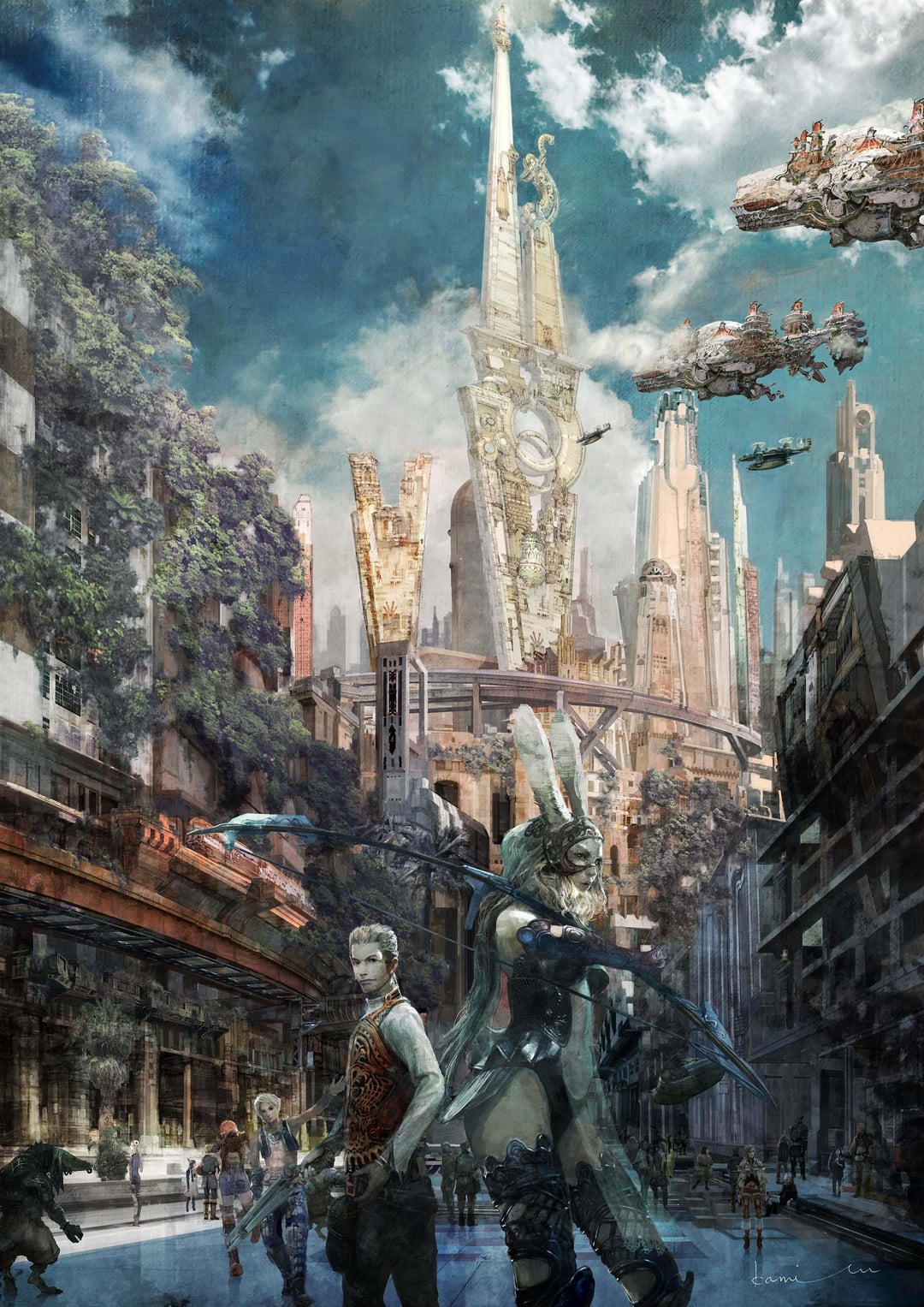 The world of Ivalice is so beautiful

When this key art released I lost my shit. I fell in love with Ivalice immediately. I’m sad the world didn’t get as many promised tie-ins as expected but this one image is still saved on my hard drive (transferred again and again through the ages) to this day.

I loved it, especially with the zodiac age release made the pacing so much more enjoyable!!!

It's a very different tone from most of ff and games at the time. I would compare it to seeing a Shakespearian drama as opposed to the gritty sci-fi and high concept fantasy that was popular at the time.

It was a much more personal story, but had a huge, overarching setting of politics, agendas and machinations looming over you. And this was before dark souls was doing stuff like hiding lore bits in weapon descriptions and bestiary entries. FF12 didn't hold your hand or spoonfeed you the setting but if you stepped out of the shallow end you could sink forever.

My favorite ff plus fav soundtrack

It’s a great game. My favourite piece of music from XII is Eruyt Village.

Eruyt theme is so soothing. The Salikawood is also a great relaxing piece of music.

It’s one of the best songs in the entire franchise IMO, really incredible. Great game too.

Its not a piece of music, but my favourite part is meeting the occurians, its music to my ears.

Meh, many people think the first 6 is the Golden Age

I say screw age and give me another Ivalice game. FF 12 was my favorite back in 06, and it's still my favorite in 21.

It probably is one of the more interesting worlds that they could still develops in. Yes ither games have more iconic stories I suppose but the world of ivalice is so deep and easy to get lost in it just can't be compared I feel.

I liked it as well.

I'm replaying it now. I am surprised that most cities take their influence from the middle east like Turkey/Morocco. I wonder if that architectural vibe change impacted the NA players' fascination w the game. I don't think a FF has explored a cultural vibe like this before (XI's Aht Urghan notwithstanding).

My first playthrough when it came out was the original release and I found the license boards unintuitive. Now I'm on the Zodiac Age and I appreciate the new boards' layouts.

The gambit system makes you rethink rpg battling where it's less a matter of turn-by-turn chin stroking strategy but more equipping and programming characters to go fight with minimal input from yourself.

The script is very good but I find the plot a little lacking.

The music is lovely and the settings are pretty great. Rabanastre is a great centerpiece city. I also liked how most areas had sections for revisiting later.

And the espers are by far the coolest summon.designs in the series, although I admit I haven't played FFs 13-15.

I'm also currently replaying it after only playing it once in 2007 or so and being pretty "meh" on it, and on this fresh replay I'm remembering why I had that opinion.

I like that you can just put the battle system on autopilot so you're not constantly tinkering with menus during battle.

The voice acting is fantastic compared to 10. My only complaint is that half of all the dialogue (especially Ashe) is that "sigh" sound.

The main plot is "everyone on all sides wants to protect Larsa because he is precious" and I'm okay with that.

The plot is bare-bones and extremely contrived. Vaan's only reason for being in the party is because he stole the plot device and has no emotional link to anything else going on aside from indirectly via his brother. We're on a lengthy quest to procure a new plot device solely because Ashe is too stubborn to take the multiple diplomatic chances she had to reclaim her throne because "I want to prove I could have defeated them." Vayne's involvement is entirely exposition-driven and we never see him actually DO any of these conniving things people accuse him of.

As much as I like Fran's character, I can never have her in my party because watching her walk in those shoes confers physical pain to my own ankles, knees, and hips.

While I like that the areas are expansive and open to exploration, some of the plot dungeons are a bit too long (I'm looking at you, Sandsea).

The Zodiac Spear treasure chest requirement is BS and not explained anywhere in-game.

If I recall, the dev team sent their people literally to Turkey for inspiration on the world's design.

FXII, for my money, has THE best voice acting in all of the FF world. Every actor just completely nailed their character and it goes a long way towards making it an excellent product.

Yeah I wonder if they developed FF11’s Aht Urhgan and FF12 at the same time considering how close the two were released.

Only got around to playing the Zodiac Age version earlier this year and absolutely loved it, original was cool too but I just clicked with the ZA version. I could easily replay it again and again.

It's the better version by far anyways. The original PS2 release was like a release candidate in comparison.

There are a variety of other QOL improvements that the Zodiac Age version made over even the original and International Zodiac Job System versions but a few of these changes are why it's re-playable now for sure.

12's map hubs had a great level of content. The designs were very cool, and all of the NPCs having varying things to say depending on where you were in the story was a very filling touch.

Ivalice is my favorite world by far

Easily one of my favorite entries to replay. I love the huge world to explore and all the different characters to interact with. And the hunts are a lot of fun.

Same here. Also, I don't know how many times I've seen this art but this is the first time I seen Basch, never noticed him there before.

I had to zoom in even though he is in the front lol. Isn't there Ashe too? Somewhere on the right

I remember at the time how people ragged on its combat system being too much like an MMORPG, when it’s really more in line with CRPGs in how you go about utilizing the gambit system.

I stand by the feeling 12 had some amazing locations and designs in terms of world building. It is a great game that took a while to happen.

But god the game just felt like it lasted forever and ever. The zodiac age does many many favours to fixing the issues with grinding and giving distinct character classes.

I think the plot has great ideas but is really subtle and hides a lot under the layers or things that happen offscreen. The voice actors are brilliant and I really enjoy Vaynes VA giving speeches in the story.

Vaan and Penelo could easily have been cut from the game and still get a similar experience with really tiny changes. I remember the Vaan hate, I get he was meant to be a commoners eyes and view of events but I avoid him in my party at all costs even if he has great stats.

I really enjoyed 12! Balthier and Fran were my favourites in it, the judges are cool as fuck and I thought Ashe was pretty badass! Although When I did play it with my brother I didn’t get half of what the lore was, bloody enjoyed it though.. will 100% would play again!

Who says this isn’t from the golden age? It released not long after FFX and is beloved by fans

Never liked the term “golden age” for FF games. That implies everything outside of it is bad and news flash!! They’re all great.

XII in particular is one of my favorites.

That term doesn't imply that at all.

The Golden Age of comics was between 38 and 56 or so, and no one thinks those are the only good comics.

It's an interesting one, I love all ff games. This one feels like a single player version of 11 which is a pretty cool experience.

I feel like this game is criminally underrated. I love it.

I've been trying to work on beating all of the games as of recently, and 12 is my 3rd favorite. I fell in love, it's such a good game.

It's funny since it came to the PS2 just as FFX did. If anything, I think 12 showed how amazing the PS2 was.

I replayed it again on my PS4 a few years ago and I still think it's my favourite final fantasy.

Not to mention nothing screams golden age more than Ivalice...

12 is like the last of the golden age yo me, love the style and combat.

I thought I hated this game when I was 12 and it came out, but I grew to love it . Such a beautiful world

Its like the transition to the modern FF games IMO. The battle system and overall pacing is very much in line with 13 and 15 and even gets a nod in ff7r. This was the game that started the modern FF we know today.

I feel like the 'golden age' is going to be very different for most people. I feel like it was the SNES era for me, but that's just my opinion. I know a lot of people love the PSX games, they're ok at best in my book but most people prefer them

They should have just put this out as a PS3/360 day one title and it would have been revered in my opinion. Came out too late in the PS2 life span.

I loved the game, the story is below some other titles in the franchise but as JRPG is pretty god. The gameplay is really creative with the gambit system and the zodiac age version added a new layer of gameplay I really enjoy when I completed it for the third time the game is huge the world and character design are amazing but the story lacks the charm other titles have people don't like it as FF title but as JRPG is awesome except the music that's FF level.

Ff12 is my favorite exploring the world and characters i love it for how deep down the rabbit hole u can go so much stuff to find and secret bosses it never ends. But the quickenings omg that was the most trash mechanics ever in a FF game

I hated the battle system at first; came back to it about a year later...now it's in my top 5 :D!

Shame it took me this long to get over my initial dislike of the combat system too, its great fun!

Massively underrated a victim of the hate Mob... Anything in 10s shadow would have struggled at the time...

Amazing game. I thought people considered this one the last of the greats?

My favorite Final Fantasy game hands down , it had some issues , but it's still my favorite.

Same here. This game is one of my favorite in the series. It was just too ahead of it's time.

This game is amazing. I loved every single piece of it. It took some design pieces from mmo games and I really enjoyed the story. The characters really made it for me though, Vaan was a little weiner protagonist, Balthier the handsome leading man, only to be replaced by Vasch's rugged handsome ass in my mind as the main. Ashe was cool but I love the main character

This was the last great Final Fantasy, definitely part of the Golden Age. It's criminally underrated