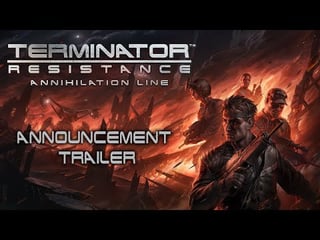 I'd love to see a sequel with a bigger budget and more staff. This was a small-medium size studio, no?

Loved the original game. Bought it on ps4 and then bought it again (physical) on ps5. Will definitely buy this.

Looks cool! Anyone have any thoughts on the base game? Never played it. Love terminator though

It's a great -- albeit low-budget -- homage to Terminator.

How does it compare to Alien: Isolation in that regard?

The atmosphere is great, has good movie feeling. The gameplay itself is pretty dull but for fans I feel this is a great buy on sale. I found it was a worthwhile playthrough.

I always thought of it as a very well made Fallout 4 Terminator mod. And I don't mean that as an insult. Very fallout with the dialogue style, how people look, many of the mechanics, etc. Just much more linear, smaller map etc.

What is lacks in open world aspects, it more than makes up for with pure Terminator goodness.

I loved it! It definitely feels like a low budget game but for me a better sequel to T2 than any of the other movies. Plus on sale, I felt I got my money's worth. I absolutely loved infiltrator mode, but it was short 🙁

I put in about 10 hours for all the achievements.

I absolutely love this game. It's one of the few video game adaptations of a film IP that I feel actually understands the property as much as the die-hard fans would.

This is a decently low-budget game, but it knows its own limitations and doesn't try to be anything it isn't. I personally find the reception to this game to be criminally misrepresentative of the actual quality of the game. It's not the best that's true, but it uses what it has very effectively.

I would call this game "Fallout light". If you've ever played a Fallout game before, it's going to feel similar in some ways. The game isn't so much an open world as it is a big "hub" that you work through before moving on to the next story beat or hub. Along the way you scavenge items, find weapons, do small little puzzles to find loot. There are also notes and such that you find that give you some exposition about life in the wasteland. There are quests you can take here and there that usually just amounts to doing something somewhere or finding an item for someone in the world.

There are also light RPG mechanics, like a dialog system, some weapon customization, and I believe there are skills for your character(It has been a bit since I last played it so I'm fuzzy there). It's a little buggy at times, and I captured this incredible moment

The shooting isn't the greatest. I had to fiddle with the settings a bit until I found something I was comfortable with, and I didn't have any issue with it outside of that. It's also a stealth game since Terminators are nigh-invulnerable to your small arms. So you'll be doing a fair bit of sneaking until you can bring the pain.

The story is probably the best Terminator story of the last 20 years. If you aren't a fan of the IP it probably won't mean much, but I quite enjoyed it. As a fan of Terminator, it was a blast to experience.

Best game ever? No. It's a small budget game, with a smaller team, and is not the most graphically impressive or mechanically innovative. But for what it does, and what it offers, I think it's absolutely worth the money. I am extremely excited for the new DLC and I am very happy they are still supporting this game.

Can't believe they are still supporting this game. Good for them!

Huh, this really looks good. Terminator has been a troubled property for so long that it’s nice to see someone doing something decent with it.

Just finished this today. Enjoy it that part toward the end walking behind Connor was a nice reference.

If the do a sequel they need to drop the sex scenes.

Is this studio doing the RoboCop game?

I think it’s actually funny that they have sex scenes. They should keep em because it just adds to this low budget charm.

Because the first DLC was free?

I bought this game on Xbox. Big sad.

What's the deal there that it's no longer supported? Don't even think it got a next gen upgrade

Because the person above wants to buy it on Xbox. Also it can be that its really hard to get a PS5 in the first place.

Am I crazy or does the female narrator at the beginning sound like Cortana?

I keep considering giving the original game a shot, but it seems kind of mediocre.

Maybe I should look into it.

This is such an awesome game; what it lacks in open world aspects, it more than makes up for with pure theme (that future wartorn world of the Terminator): can't wait to jump back into the game!

Is this free DLC aswell?

I love this game so keen for this

beating a dead horse that has gone rotting in the meantime...

The game has been generally enjoyed by people though? What about it is rotting???