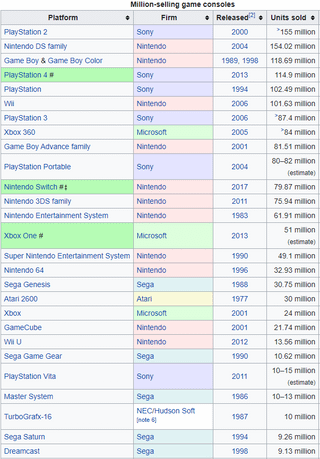 Just a quick and interesting WIKI screenshot of consoles by sales. PS2 is the best selling while Dreamcast is the worst (only included relevant systems). Sony is in the top ten 5 times, while Nintendo is in there 4 times, and Microsoft only once. The Switch may enter the top 10 soon, replacing PSP.
2 ： Anonymous：2021/03/07 18:13 ID: gq4b13j

Sad PS Vita noises, the system was so great.

Yeah, it was a bit more powerful than the original Xbox but with some more modern bells and whistles, where as the 3DS was basically just a portable Dreamcast or maybe PS2.

It being powerful, at that time, was its downfall, though. It was too big of a risk making games for it since they'd be more costly, and Sony not launching with with a bunch of first party games didn't help.

I think the reason the Switch succeeded was because Nintendo launched it with BOTW, and in that same year Mario Odyssey came out, plus Skyrim, Doom, and Wolfenstein from Bethesda pushed it a bit too.

The Vita just didn't have the software support to make people wanna buy it, and thus nobody wanted to develop for it, and endless loop.

To be fair you should also take into consideration that Microsoft released way less consoles compared to Sony and Nintendo.

I think it's because Japan won't buy western game consoles. lol They don't like our style of games very much, especially FPS games, or RPG games not based on a manga.

The biggest surprise on this list to me will always be that the PS3 ended up ahead of X360 in total sales.

The Dreamcast didn't even outsell the Saturn? That's depressing (but not surprising, Sega's hardware division couldn't sell ice water in Hell by 1999).

I want Sony to make a new handheld, if they can bring back the vr, they can mess around with a portable

The DS came close, though, and that was without the ability to watch movies.

Damn, the switch is gonna be in the top 5 within a year I bet

Wonder how many folks bought a PS2 just because it was the most affordable blu-ray player for a while. Definitely why I got one in 2002.

PS2 was a DVD player, not blu-ray. lol

I would really like to see more accurate Xbox One sales numbers.

Well you would need MS to start reporting their console sales again for it to have accurate up to date numbers.

So that it will be just behind the 3DS numbers instead behind the NES?

I would say PlayStation 5 is worse...

I think it sold 5 million, but it's only been out a few months so... not gonna include that one.