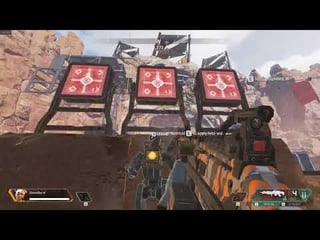 There's one thing anyone who plays Pathfinder should know.

1.) Unfortunately, he has a bigger hitbox than you might think.

2.) Understand the concept of positioning and know how to apply it in-game.

The former is being addressed by the devs, and makes Pathfinder an understandably tough pick for a lot of players, but I'm going to focus on the latter for those who want to play him despite the hitbox issue.

Let's take a step back for a minute. Think about how dynamic Apex Legends is (and BRs in general). There are many locations you might be in at any given moment. With a squad or two just around the corner, the number of potential fight locations is massive. This isn't a game like Counter-Strike where you have two spawns and you play the same positions on CT every round. The optimal position in any given fight is dependent on the place of the fight on the map, your location vs your enemy's in that place, your gun, the legends and abilities being used, and other variables. I think this is one aspect of what makes Apex as fun as it is. There's always a unique fight in every game.

Back to Pathfinder. You're able to zipline and grapple your way to locations that are hard (and sometimes impossible) for opponents to get to (this includes the air). The good thing is, not only can you get there, but you can get there quickly. Whenever you're about to engage with the enemy, think of the ideal location for this fight, and then grapple there.

If you're a player with solid aim and you have the better position, you're going to win a lot of fights.

Here is a video walking through some clips to give you a sense of what I mean.

I promise if you start thinking about positioning when playing Pathfinder, you will get a lot more kills and and a lot more wins.

Huge respect to you for playing Pathfinder. I played him for quite some time. Enough to understand positioning, when and where to grapple and Zipline. I just recently learned about the hitboxes and decided to play as lifeline or wraith. I'm really hoping some tuning goes in effect for all legends regarding their hitboxes and health pools.

Devs said recently that they are addressing the issue, so that’s nice. But I will never blame someone for switching off PF to another hero with a smaller hit box. At the end of the day, most of your battles will come down to head-to-head fights, and if you’re harder to hit, that’s incredibly powerful.

I'm usually Pathfinder - his ability to reposition himself and the whole squad quickly has been vital to the times we've won it.

Yup. In some ways, I think he requires the most in-game intelligence to play correctly. Knowing the correct spots to place yourself in each fight in a split second requires contextual awareness that really only comes through playing.