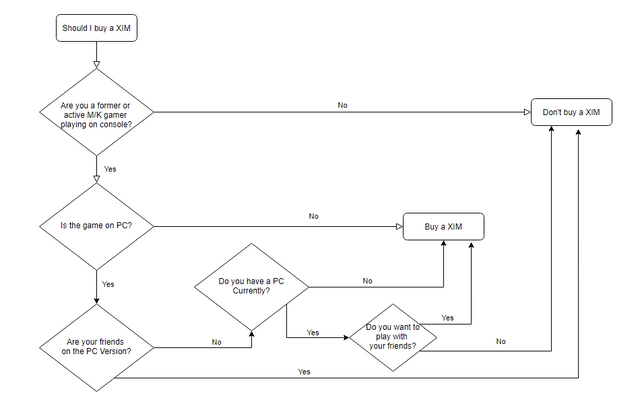 Removal of the "Anti-Xim" Rule. We [the moderators] never discouraged civil discussions about the XIM but this rule did not coincide with that. Civil conversations about the XIM are always open to be discussed here.

Addition of the "No buying and selling" Rule. While there are places on reddit where people buy and sell items, this subreddit will not allow these items on this subreddit. You should buy and sell products on platforms such as ebay or amazon where there is some consumer protections.

I have created this flow chart if you are interested in buying.

For those who come here to hate.

I'd just like to share my personal take on the XIM. Around 2011, I was searching for some way to play FPS games with all the friends that I just could convince to get into PC gaming. I had bought the fragFX controller for PS3, it was terrible. There was a USB input buffer that was programmable that I was heavily researching but I'd basically have to program it myself. I was trying to think of how I'd handle variable input, per game (basically what XIM users call ballistic curve).

That's when I found the XIM3. My console friends said ,"$140 on an adapter? Are you insane?". These were the guys spending $100 on modded "dropshot" controllers (COD reference for some older players).

XIM3 was the coolest peripheral I had in the house and with my first child on the way, I got really comfortable casually playing FPS games on the console WHILE DOING MAJOR RENOVATIONS TO THE HOUSE (OMG). Console communities in FPS games outlasted their PC counter parts. I made a lot of XBOX friends who said ,"XIM? Whats that?" I'd explain it and they would say ,"lol dope".

Let me include though, XIM is no substitute for "raw input". You can get used to the XIM but switching back to PC is difficult. It was one of the first things I noticed and why my transition to XIM was absolute for FPS games. Going back to raw input on PC was like having the sensitivity very high. I had to go to a very low sensitivity and work my way back up as I would over shoot my targets. I could have, without knowing, been using AIM assist as a crutch.

I bought the XIM4 with the Xbox One and that's generally when I stopped. Destiny 2 had come out and that's when I realized that wasn't just the Halo games... all Bungie games never will feel comfortable on the XIM. Call of Duty: Advance Warfare was so buggy and latent, I put down the console and went back to PC gaming.

Mouse and Keyboard will become the norm if mobile gaming doesn't set the next generation back 20 years. As I grew up in the 90s and 2000s, I view FPS gaming on console much like console players probably view kids playing FPS games on a tablet with on-screen joysticks and controls. Convenience and availability tends to rule the market place and kids have little choice to what is given them. Those kids grow up and then they use their $$$ to sway the market in directions away from the "best inputs".

Console gaming is starting to get some buy-in with mouse and keyboard. There are some games with native support. I'm hoping one day Playstation and Xbox will provide a ambidextrous wireless mouse that pairs with the controller. Left or Right handed the person can use half the controller and the mouse. An optional choice but an easily accessible one.

This will open the doors to more cross play, such as found in games like Rocket League where the input between the platforms is universal. This will provide larger player bases and extend the life of communities in games. Extending the life of communities discourages game companies from creating a copy/paste game each year with no effort and corralling users for a release to quickly die off.

My memories of playing on the XIM were not as competitive as the games out now.

I play RS6:Siege on PC and I'd imagine if I was a console player trying to climb the ladder of ranks, I'd be pretty upset if I knew my opponents were using a XIM and it's clearly banned by Ubisoft. In the years I played on XIM, there was no ranking, there was no match making. You played for the hell of it.

If the XIM is banned by the publisher of a game, you are cheating.

I discourage players when they consider switching to the XIM for an advantage, especially in a community that has banned it.

I could see if I was in a position where that if I were to play with my friends meant playing on console. I'd probably use a XIM. I hate playing an FPS game on controller. I simply wont play on a controller, period.

If I were actually competing or playing in competitive modes, I would play on PC. If I wanted to gauge my ability in the game based on the community, I just wouldn't be able to play competitively in a community that banned my input device.

If you are hacking your XIM and using scripts and automated actions, you are cheating

Xbox and Playstation have had this ,"1 for 1" rule. Any device is welcome on their console if it's 1 key press for 1 key press. If you are automating actions and clicking a series of key presses with 1 single key press, you are cheating.

Keep in mind, not all superior inputs are considered cheating in many genres of games.

A steering wheel and pedal's are vastly superior to a controller in racing games. The ability to turn ever so slightly with a wheel and sustain an exact joystick position while simultaneously ignoring/disabling the the horizontal access is huge. Anyone who plays with a wheel and pedals on PC clearly has an advantage.

"Fight Pads" are preferred for many fighting games as they push L1 and R1 into the face of the controller and have much more reliable 9 directional D-Pads. Playing these games on mouse and keyboard is atrocious imo. Anyone who plays with a gamepad on PC clearly has an advantage.

Flight sticks are usually superior to controllers and especially mouse and keyboard.

Sometimes it's just spam, but there is always someone who comes in and goes to far. If you are part of it, your user name gets passed on with the guy that "went to far".

On behalf of the majority of the anti-xim people who came on to your subreddit, thank you for coming out and doing this. Not only does it seem like you’ve reformed your mod system (many of whom seem to not be able to take an sort of criticism) but you did something respectable, admitted when the xim is considered cheating. Thank you for acknowledging that many games such as R6 strictly prohibit those types of performance enhancing devices for console. I still fully stand by many of the points made by my fellow “anti-ximmers,” but I’m pleased that there’s a sense of responsibility and ownership with the mod team. This was an unexpected yet extremely welcomed post and again, thank you.

As for the conduct of our behavior, I will admit that I definitely got out of hand with personal insults and I’m sorry. We will be out of your hair in that sense. But I truly believe there should be able to be civil discussion regarding the use of xim.

This is EXACTLY what my take on using a Xim, only worded far, far better than I ever could.

Thank you so much for writing this.

directions unclear, i'm in the oven