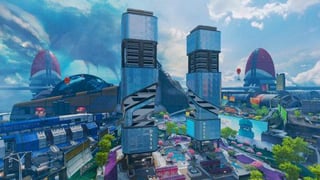 Welcome to Free Talk Weekend! There are no specific discussion topics for Weekends. As such, moderation is more relaxed regarding specific and content within the thread.

What's on your mind? How's your week in Apex? How have your Apex games been going lately? Want to show off your stats or banners? Need some help or want to give out some pointers? Anything you want to talk about that wasn't brought up in a previous thread or did you miss a specific discussion topic earlier this week? Talk about it here!

This thread also serves as a group finder!

Looking to grind out battle passes or events? How about a squad for some sweaty ranked games? Or maybe you're just looking for a chill bud for casual? If so, look no further!

If ranked, what rank?

Alternatively, you can check out our Discord, which has dedicated LFG channels, or our LFG subreddit

Moderation in daily threads is more relaxed, but please stay on topic, be respectful of others and remember our rules

Got any feedback for these daily posts? Message Modmail with any valid suggestions and feedback!

I'm very excited to see what bugs the new season brings! The anticipation! The wait! Oh man, it's palpable! Will we have server errors? Will Seer be op? Completely underbalanced? Who knows! It's a waiting game at this point and I almost can't hold my excitement!

Somehow the matchmaking gets worse every season, so that's another thing to look forward to.

Reality: Both teammates get knocked, and you're in a 1v3 situation. You knock 1. You knock the 2nd one. Pressure is on.... and you kill the 3rd one for the squad wipe. You look around, and realize both teammates quit the game. Just fills you with emptiness....

Yep! That happened to me once

not that anyone else cares i got my heirloom today and i’m really hyped about it!!!

Not sure about Seer’s abilites but his character design and voice is lit!

I'm waiting to actually see it and play it in-game before I'm sure. Sometimes abilities sound bad on paper and end up fun/good. Opposite is true where sometimes on paper, they sound OP when they aren't.

Opposite is true where sometimes on paper, they sound OP when they aren't.

Like fuse. Remember when they told us his tactical was a concussion grenade? And then it turned out to literally not do anything, lol

Matchmaking makes this game borderline unplayable for average players in ranked and pubs and devs refuse to seriously address it. On another note, can't wait for Battlefield 2042 and Halo: Infinite.

On another note, can't wait for Battlefield 2042 and Halo: Infinite

Which is something very likely to happen.

I got killed by a pred gang then the next game I queue into I have a level 24 on my squad. Great, that'll help.

Obviously not that new player's fault (wasn't a smurf), but it's painfully obvious how exploitative this game has become. Respawn have long since went down the shitter.

I would happily take longer queue lengths to find more enemies closer to my skill level. I'm talking 3-5x longer. Matchmaking to win 10% of your games or whatever is BS. I want my skill to shine or suck in a lobby of my peers. I don't want to be hand fed a win by playing against people below me either.

Word on streets is gibbys bubble is getting a health bar??

That would be a really good nerf, if they gave it 500hp that would be good I think. So that one person would have to work to take it out, so it dosnt affect him much in pubs. Whereas he’s very strong in ranked/comp and a team could take out a bubble

If I land on a mastiff I already know I've lost

I prefer to do absolutely 0 damage at 6 meters

I would love to see a reduction in P2020 and mozambique spawns... Solely for the sake of a little balance. I get the RNG aspect but what you thought was going to be a good game with good teammates turns out to be a joke..

Another week of not finding a weapon in the first building you go in after landing.

What are you talking about? There’s always seven or eight 30/30 repeaters to choose from off drop! Perfect for those opening close range combat scenarios against the enemy team wielding 301s and Flatlines.

(/s, just in case anyone takes me seriously)

The Community: The Bloodhound wall hack meta is killing the game.
The Devs: We hear you, we're releasing Bloodhound again but with a different skin and a cooler voice.

When does Arena matching gets fixed? It's not fun anymore getting trashtalking console/PC duos being worthless the whole match while you win the match 1v3 or lose.

Matchmaking will never be improved in any way.

Anyone else think being forced to play arenas to complete the weekly event on the same shitty map all week is torture?

This game is absolutely terrible to play if you are solo queuing. There are lag spikes in every game type. Team based matchmaking is a joke where you either get a lvl 10 newb that has no idea what he’s doing or you get a sweat lord octane or wraith that disconnects immediately after pushing a full squad by themselves. Some people just fucking get to play without any audio at all like they’re descendants of ninjas. And these aren’t new problems they’ve been here since the game came out but the devs are too focused on every flash event/new battle pass/new legend that they’re letting the game run itself into the fucking ground. It’s just frustrating that you guys keep putting out new game modes/ event that end up causing more problems on top of the shit that you refuse to fix when all you have is time to fix this shit but you don’t. You literally just don’t.

Hope everyone has a great Friday!

If you’re in masters rank; just a quick question. What’s your K/d for the season and overall?

Has anyone noticed a increase of toxic behavior towards Loba? If I’m playing as Loba or has a teammate that is, the third player will often hit us away from the black market. I had one teammate the other day that would shoot my black market and called me a greedy goblin. It’s frustrating.

I dont know where the hate comes from. Just because she can find better loot slightly faster? I love having her on my team, black market is Really nice to have on your side.

Can someone explain to me how I can go from Teammates around my level to suddenly teammates level 8-15?

In solo Q it’s because the matchmaker decided you’ve become good enough to be the carry/babysitter for 1-2 level 1-20 0-2 kill newbs. Congratulations, you’re an expert at Apex! Please carry your team!

Really the game now wants you to form an actual squad. Solo Q beyond that point becomes painful most of the time as you will either dominate or be obliterated. Evenly matched games will become very rare.

no audio until theyre right behind me

NO FOOTSTEP AUDIO UNTIL THEYRE SHOOTING ME

How do I beat crouch spammers consistently? I tried crouch spamming myself but I can still lose

Bye bye fragments, you won't be missed. Well, I hope I will be able to say that anyway

The sooner Olympus is removed from rank the better

Anybody else horribly sick of this wallhack bloodhound meta?

And our new legend is a wallhacker too. What a shame

Gibby meta too but supposedly he'll get a buff (somehow)

Off the top of my head;

matches are in a constant state of stuck on the pre-selection screen, before loading you into the middle of a match with no choice of legend

it’s a total toss up if you’re even able to see your teammates usernames at the bottom of the character select screen and who each player is choosing from game to game.

the game constantly freezes at the climactic second or two of a gunfight, causing you to lose control and vision before dying and not being able to see or defend against what killed you

teammates are still missing from a worrying amount of matches. Roughly a third of my 900 matches this season have been without a second or third teammate

teams are still horrendously imbalanced for solo queue players. All this seems to do is annoy both parties of differently skilled teammates while artificially inflating the performance of coordinated, high level players who get an easy beat down game after game

when trapped in Fuses motherlode, popping meds cancel themselves rendering you unable to gain any health back as you take damage

When readying up, the game may or may not cancel it and leave you back in the lobby

Any more for any more?

I feel like the matchmaking system in ranked is stupid. The Devs said everyone has a hidden number score that will ultimately pit you against similiar level players with similiar hidden scores.

That means a gold can go against a platinum. But, you still can't have a platinum in your team?

Furthermore, what's the point in ranked if you aren't going against someone in your rank? Will I get extra points for defeating someone a rank above me? No. Will I at least get some point forgiveness for dying to a master rank? No.

Hidden scores is just SBMM, but suppose to be implemented in pubs. Rank is suppose to go against same ranks!

With the upcoming new season I'm taking bets on all the (un)intended events that will happen on release. These include, but are not limited to:

playlists being broken audio even more broken than S9 matchmaking against 3 stacks and preds more frequently than S9 "can't find servers" error code:net, code:leaf, code:shoe, code:fuckyoubuyskinspls and all their variants Seer being massively OP at launch (like Horizon) Seer being absolute trash at launch (like Fuse and Rampart) Rampage LMG being OP (like the Bow was) Battle Pass being trash (like S9) Arenas Ranked not working as intended Some massive controversy happening (like Season 7's Battle Pass changes)
30 ： Anonymous：2021/07/23 17:31 ID: h69sqqk

Why can’t we have all maps on rotation in ranked? It gets annoying playing one map for weeks. Ranked would be more enjoyable (I already like it in general as I finally solo’d to Plat 2 this split) if we had more map variety constantly

i've been asking the same question since i started this game on S7. Why can't we never play all 3 maps in one season?

Here's what I don't understand, I'm level 209 and every champ squad is mostly around my level. Now, I played pubs for roughly three hours just now and 90% of the time my squad gets wiped is by a 3-stack of maste

The solution is to implement a mercenary mode where Solo Q squads fight other Solo Q squads and no Duos/Premades are allowed, because if they strictly separate Solo Qs from Premades in pubs, TTV sweat lords will bitch about long queue times and why they can't "play with their friends" anymore and roll people with a huge disadvantage and flex their K/D.

If they separated PC players from console players because "PC has too many advantages" I don't see whey they don't do it with Solo Qs and premades.