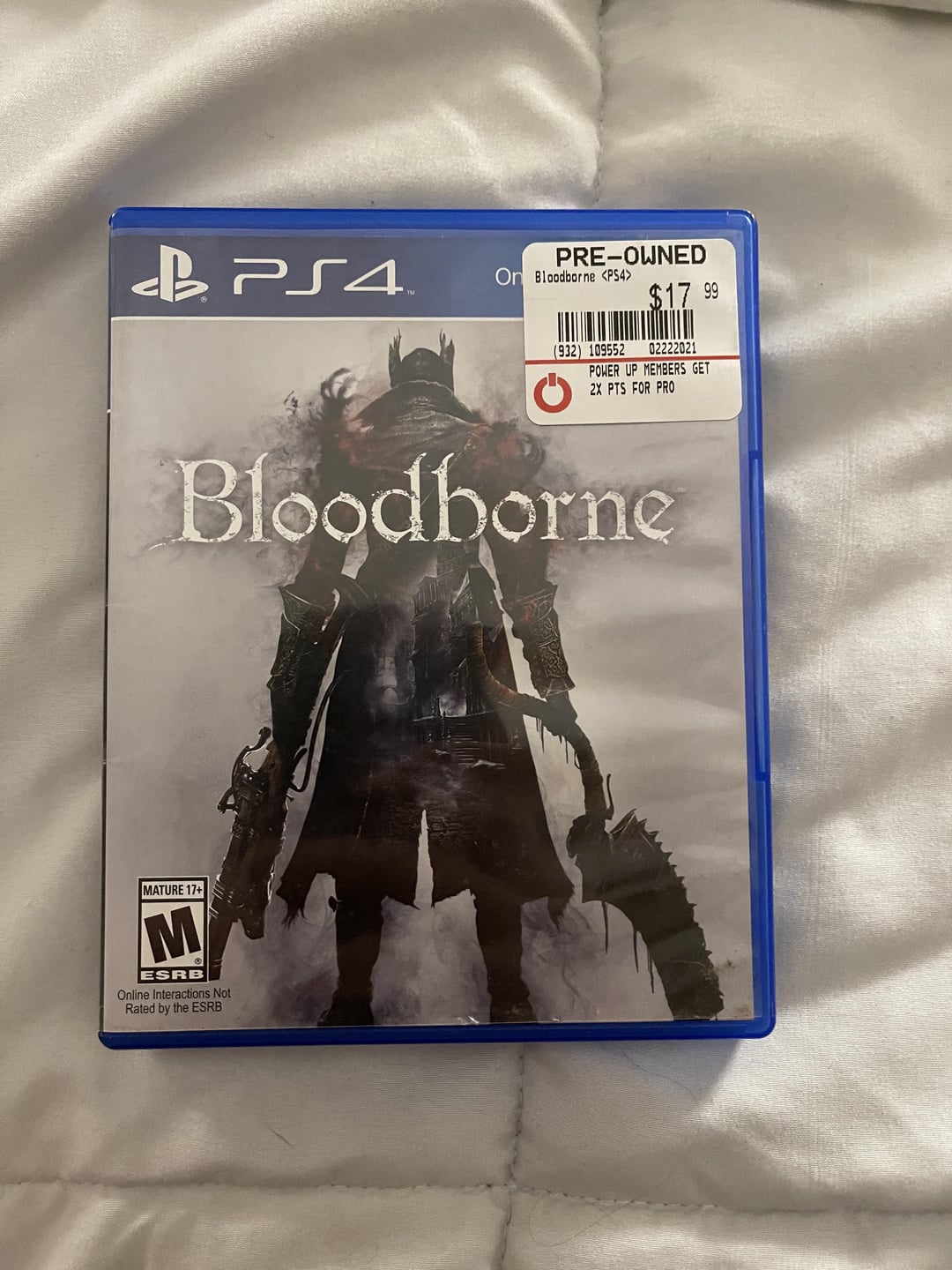 That kind of low quality post is normally removed due to rule #7 (Picture of a single game box).

Due to it having some discussion, it will stay.

Seriously, I was super happy to get this game for $3 and all the comments are bashin me for it

I like to think those comments are for others, not op.

Old Hunters DLC is well worth it too

Imo old hunters has the top boss fights in the entire game. The Maria fight is just so goddamn perfect. And orphan just fucks your day up.

Lol so many people saying bUt $3 iS tOo mUcH hahaha

Yeah, though one commenter mentioned returning it, getting a ps gift card and buying it digitally for $13. Probably end up doing that just bc I like digital games

I can't explain the amount of joy I got after defeating the first boss...keep at it..never give up even if you're dying...you learn something new each cycle

Amazing game! The hoonter must hont

My the good blood guide your way

I’m about to start this game but I’m a little scared it’s going to be too hard. Never played any of the Souls games either.

That was me a few weeks ago.

I put about 12hrs in, and still couldn't beat the first boss in the graveyard. Then I looked online and saw that there were like 40 more bosses to go.

Then I uninstalled the game with a vengeance, and decided that I was never going to play any of the other FromSoft games I foolishly bought into my backlog. Some people love Soulsborne games. I despised my dip into them. It just wasn't fun, which is what I want out of a game.

Yeah, yeah, yeah.. "git gud" people will say. But if I'm going to put the amount of effort and sheer hours into something to be able to succeed, it'd be nice to come out the other side with a useful skill. Like being able to play sick guitar solos on a real instrument or something.

People will tell you to go in completely blind, but there are so many basic gameplay elements that the game never tells you about. Things like, you "parry" attacks by shooting your gun. And that there's a weapon upgrade/repair bench, fairly hidden & unmarked in the little "safe space" hubworld you occasionally visit.

You’ll love it. Enjoy the hunt and fear the old blood!

Get the DLC and wear headphones. Happy hunting 🙂

Man your in for a treat

Best of luck to you hoonter

Make sure u get the old blood dlc. Freaking awesome.

I beat this game, is a very difficult game but worth the struggle. It actually gets a bit easier as you progress. The first enemy you come across gives you a butt whooping. Takes a bit of learning and patience.

Your gonna love how many times you lose souls..

One of my favorite games ever. Take your time an enjoy this masterpiece in combat, lore and level design.

I want to play.

What do you advise me. What are the best games.

As others have mentioned, get the DLC for like $10. It. is. incredible.

Without a doubt one of the best games that got released for ps4.

U will suffer, and enjoy at the same time hahah

You'll love it. Just don't be surprised if you end up buying the Dark Souls games too.

I really enjoyed this game and hope you do too. But don't forget there's no shame in checking a guide or having a break and coming back to it after.

Don't forget to get the DLC and make sure to do it before you finish the game, so you wont get your ass handed to you in NG+

This is a good disc to have because you can install offline unpatched and utilize the infinte resources glitch. May try that myself since I'm not great at soulsborne and especially shit at parrying

Nice, make sure to get the DLC!

Btw after playing this game the dark souls games are easier.

can this ps4 disc work on ps5 as well?

Enjoy! Real good game. I think the Old Hunters DLC is on sale as well.

I have no idea what this means but I will soon!

Nice, gave the game a try but the aesthetic just doesn't appeal to me, not to mention bad performance. Hope you enjoy it!

Simply because I’m excited about it??? Why do you feel the need to comment negative things under people posts?

It’s pretty but not worth the frustration imo

Those stickers ruins the game for me. I rather pay more if there wasn't a sticker on it i am 100% serious.

That sounds like some sort of obsessive compulsive disorder. Don't worry about the darn stickers, it's only the game ya want. Finish the game and trade it in, that's what I do. Don't see the point in keeping games, once I've finished em I never play em again. Well there's a few exceptions.

Yeah but I got it for $3, it was literally the only game at GameStop that interested me

It was a PS+ game a few months back but it's not currently free.

Uhhhh not that I know of

Its on the PSN PS5 collection but it’s not free on the regular PSN store.

Isn’t this game free on ps plus

Couple years ago it was, yeah.

I got it for free

Enjoy the game but keep in mind you spent more than $3. Store credit is still currency. The game is completely worth it regardless.

Who can get me a Xbox gift card??

Well. I just got it for free with the PS+ Collection

Nice, I have a ps4 so I’m not eligible for that

I started playing but stopped halfway through when I heard Sony dismantled the company that made it. I can't support them for that decision knowing there won't be an ending or sequel. Its like watching Avengers endgame...but never relasing part 2. How will I know if Thanos will get revenge?

From Software is alive and well. Am I missing something?

Nothing has happened to the company that made it, not sure where you heard that. Also bloodborne is a standalone game there is no sequel planned and the game doesn't need one. This logic doesn't make sense either, you cant "support that decision knowing there won't be an ending or sequel" so you are going to stop the game halfway and not actually see the actual ending that exists?

Dismantled the company who made it? From software is one of the most popular and celebrated developers out there and made Dark Souls 3 and Sekiro after this, what are you talking about.

FromSoftware is doing perfectly fine and still making amazing games. However, Miyazaki has said he has no interest in a sequel, so if a Bloodborne 2 is made it would probably be by a different company anyway.

This is the silliest thing I’ve ever read on this sub.

I guess you won’t be playing Elden Ring when that comes out.