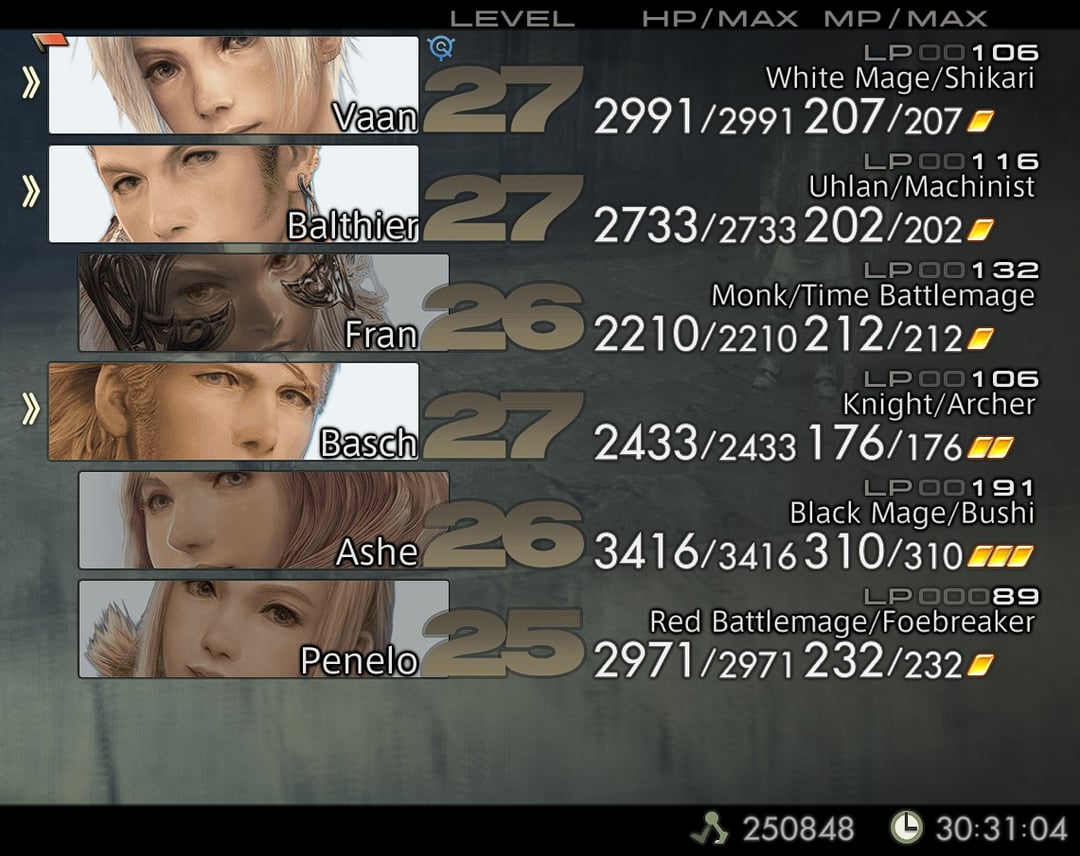 I doubt anyone cares too terribly much, but here's what I got going on so far. I just beat the Earth Tyrant thing, it actually made it through my girl team just barely. A quickening chain by mah dudes finished off the last 15% or so HP.

That's kind of how I have it separated - 3 guys, 3 gals, with Ashe leading Alpha team and Vaan leading Bravo team. I like the duality they have of thief/white mage and samurai/black mage.

I don't fully know what I'm doing though so any advice on my jobs would be appreciated. I also still haven't assigned Belial to anyone. I basically just now got two boards, so I haven't played around with it. I liked the way it was going until my last board was for machinist which I had already not planned on giving Balthier but oh well.

I kind of went on the idea that their new board should have MORE empty slots than the old board, I don't know if that's true but it seems like they would get more licenses that way. (My old boards were getting full)

I'm super chill though, knowing that I can reset my boards. I'm only assuming that includes quickenings and espers though.

Oh also, I am really liking all the individual party members. Going in I didn't think I was gonna like the boys that much, but Balthier is smooth as silk and Basch is hawt af so I don't mind haha

(It took a while for Zell and Wakka to grow on me for example. Now I wouldn't trade them for the world...but that's after like a decade or two of being with them haha)

Edit: Also, looking at the screenshot, the jobs aren't necessarily in the order I gave them, I started Fran as Time mage and NOT monk for example, but I DID start Balthier as Uhlan

I'm not certain that you can re-assign the Espers and Quickenings. I only played Zodiac Age version once though

Yeah, the job order thing bugs me a lot too. It seems like it just goes White Mage -> Uhlan -> Machinist -> Red Battlemage -> Knight -> Monk -> Time Battlemage -> Foebreaker -> Archer -> Black Mage -> Bushi -> Shikari, since that's the order of the Zodiacs from Aries to Pisces.

You can't really go wrong with job choices, nor do you necessarily have to use all 12 jobs, so really, it just comes down to what you like and what you personally want your characters to do. When you reset your boards, it resets everything, Quickenings and Espers as well, so the only thing you invest in it is time, to refill all those licenses again when you reset.

Shikari / White Mage is very solid, as it's tanky, deals decent physical damage, supports the party well, and way later, you can buff the Yagyu Darkblade with Black Robes. It could be argued that Red Battlemage is better, as it makes for a more well-rounded unit that can serve many different roles. Shikari doesn't do a whole lot on its own other than attack and toss items, so any mage class gives them a lot more activity.

Uhlan / Machinist may be a lot better than you think, too, since it's uniquely the only combination that can attack with all of the elements in one form or another, between the spears and various ammo types. Though pairing Uhlan with a robes class would allow you to buff the Holy Spear with White Robes later on in the game, which makes it almost as good as Excalibur unbuffed, which is quite powerful, to put it lightly. Bushi is my personal choice, but you like your Shikari and Bushi duality and I don't really want to split that apart for you, so I'll just say it's not exactly necessary for you to make the change if you don't want to.

Knight / Archer isn't something that a lot of folks do, but it's a solid theory, I think. Archers do like heavy armor to make their bows more effective, and Knight having all the item lores that Archer gets makes for a solid support unit too, being able to use Phoenix Downs like the Arise spell once you get Pheasant Netsuke, uniquely qualified to the Archer. Archer lets a Knight attack flying enemies without Telekinesis, which isn't available until pretty late in the game.

Monk / Time Battlemage is similarly benefiting the poles with heavy armor like bows, but unlike bows, poles are good combo weapons, so it is useful for them to not only have heavy armor but also access to the Genji Gloves, which you can only get from Knight or Foebreaker. I lean towards Foebreaker, personally, but it will make the character pretty much only good at melee DPS and not much else, but they're gonna be great at beating things to a pulp. Time Battlemage certainly makes for more utility, so if you're fine with sacrificing DPS for that, then like you have it is also good.

Bushi / Black Mage is something I've done personally, and I really like the combo a lot, though it's not very popular. It serves as a natural extension of Bushi, who has to rely on motes or Shades of Black to utilize all those Magick Lores beyond the katana damage bonuses. This way, you can freely cast whatever you want, when you want, so it's more reliable. Genji Helm and Genji Armor is more than enough for Bushi as it is, as the Magepower Shishak is only slightly better and Grand Armor is pretty tit for tat.

Red Battlemage / Foebreaker is about the only one on your list that I don't see a lot of real value in. Maces use your magick power to calculate damage, so heavy armor isn't going to help them be more effective. Hammers and axes hit like trucks... sometimes, but are subject to random damage, though they are quite reliable most of the time, and Vrscika is the earliest available ultimate weapon, so it's nice. If you're using hammers and axes for your weapon and slinging spells for support, then this is fine, but if you're using maces, you're better off with another class to pair it with that doesn't give heavy armor. If you did swap Red Battlemage to Shikari and take White Mage for Foebreaker, though, White Mage / Foebreaker is a quite nice combination, where the hammers deal sufficient damage to sustain MP while you can support the team with White Magicks, and it's like a hammer-wielding paladin, more or less. This would probably mean letting Vaan have Foebreaker and Penelo getting Shikari, but that would work out pretty well, as Penelo is quite good with knives and ninja blades.

But most of all of that is just me tossing ideas around with my own personal experiences, you don't necessarily have to take any of it and would be more than fine to keep your team just like it is. As long as you're having fun with it, that's what's most important.

Bro, you're actually leveling all of your team members. What a master of diligence and good choices.

Atm I have ashe, penelo, and balthier at 36 and everybody else at 10 in the Sochen Cave Palace. Also, Addramelech was hard.

Haha thanks! It's partly due to "ocd - tendencies", I do the same thing in Pokémon (for my team) I really don't like when they are too far off level from one another.

I have never leveled all party members until i got the struggle for freedom mod. All my other files are like 3 level 99 characters with all the best equipment and 3 guys who would die in giza plains lol. Good job keeping all your guys leveled

Dude the monk/TB pairing is awesome, I’m trying it on my play through Rn. Vaan: Black/Knight, Balthier: Bush/RedM, Basch: Monk/TB. Super fun dps type build. That Foe/RedM is super interesting though, how does it perform?

The Foe/RedM is doing pretty good, but admittedly I haven't done much with it yet, other than the Earth Tyrant. I'm about to start up the game now though (I "accidentally" slept the whole day away) but unfortunately I'm about to change a few of them w/ Ezios suggestions: