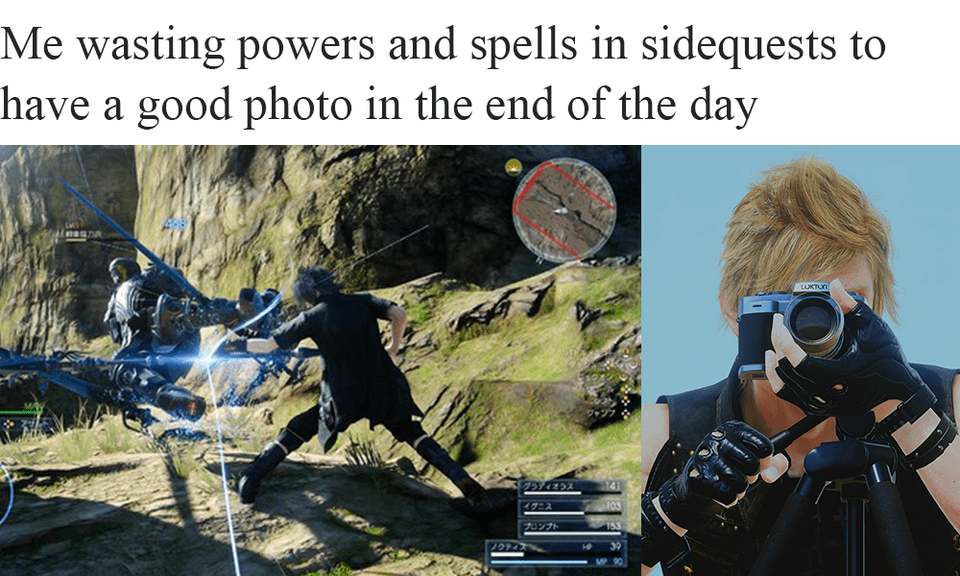 Am I the only one that picked the worst pics and ended up with an ending that looked like a blind mans journey?

I don't care what anyone says, FFXV just oozed charm. Most fun I've had with a video game in a very long time.

As someone who almost exclusively plays Nioh, Smash Bros, and a handful of other more challenging titles. FFXV was a breath of fresh air for me and while everyone hated how segmented it was. I enjoyed how FFXV seemed to touch every piece of media it could.

Yeah, playing it for the first time lately.

The game is... heavily flawed. It's not remotely surprising production was troubled.

But ultimately, it's still a great game because what it does right, it does really right. It's also just unique. So many games are almost constant tension, yet this game is oddly relaxing. I find myself just getting so attached to the main characters.

Games should strive to be unique, like this game did.

I love FFXV, all the mechanic and such! It is definitely funny! I haven't played the others FF yet, this one was my first one. I am willing to play the others, I love FFXV soundtrack, pretty immersive may I say. I had played Nioh and Warrior's Orochi 2, so I also liked how the game works as well. Haha!

FFXV was a fantastic game all around. That being said, it would’ve been 10x better if the end was as good as the start was. I feel like it just fizzled out the closer you got to the end of the game. The actual ENDING was great. The 4 hours before the ending felt like filler fluff.

Bro big facts. I started replaying it yesterday and, although FF7 remake overtook it as my favorite final fantasy, it’s easily amongst my top 5 favorite games of all time, for the reasons you’ve outlined: It’s so damn uniquely charming in all facets.

I'm with you, man. Game wasn't perfect, but I loved it.

It's beyond deeply flawed but it's one of my favorites in recent years.

Also I don't think it's half as bad as reddit says it is.

I definitely enjoyed this game more than it seems most others did. I loved the return to a wide open world non-linear format. Not only that but the graphics design around that concept was perfectly done. I think FFXIII suffered from "hallway syndrome" really bad because the world around the "hallways" was beautifully designed but you couldn't explore any of it. FFXV did fantastic with that in allowing you to explore near everything, and with the few areas you couldn't explore they did a great job at making it obviously so or visually less interesting.

XV also gets a lot of criticism over the dialogue but honestly it's a vast improvement over XIII in my opinion. XIII's dialogue was so forced, hokey, and cliche it was eye rolling. Snow and Hope honestly feel like they were written by a preteen. XV's dialogue may not be perfect but it's way better than the last single player flagship title.

I loved ff15 but it had a lot of moment that didnt seem to make a lot of sense like this, but they were still fun. Beautiful world and game, just felt a little too rushed at the end and felt like there was way more to be told, it left wanting more instead of feeling relieved to be finished, which IMO says a lot about its charm. Really loved the music packs in the car too.

I have tried three times to love it. My most recent try I bought the complete edition, got to traveling around, didn't mind the combat, just took things slow. Got maybe 20 hours in always having weird feelings about this thing or thst thing feeling so bland of out of place.

Then I got to a farmstead, was hoping there'd be people in it. Came upon a sparkle and checked it. It was a paragraph about the farm, who was supposed to be there, what the problem there was. But no people, no animals. Just fucking dev notes and an unfinished location.

But they trick you. They released heaps of either old content or patchwork content to make you feel like there's a lot to do. You can get weapons, but they don't matter because you can spam warpstrike and potions. You can us spells, but they don't matter because they don't do much damage and they hurt your party anyway. There's lots of songs and throwback content, but that's stuff they already had in the bank. There's comics and a movie but that's content that should have just been in the game itself. There's DLC but I gotta read reddit posts to try and divine a play order.

Those dev notes made me uninstall. Square didn't have a plan for this game, they had no direction and they ran out of time. This is not the company I fell in love with. They made beautiful pieces, but didn't put it together. And then they buried it in a lost and found bin of random reused content.

Been seeing a lot of people defend this and XIII lately, and it's good people had fun with them, but Square should know better and I view both games as massive failures in game design and storytelling.

I would take tons of photos of graphic/lighting glitches, and then a few shots of just really weird, depressing things. I think my favorite was this middle aged woman sitting at a table in the middle of the night outside, staring at a plate of slop. She looked so depressing, I made that photo my final picture memory in the ending.
It always amazed me tho how Prompto was so good at getting crazy battle shots and pictures of Gladdy's gorgeous butt.

My biggest problem with the game is the difficulty. It’s just so god damn easy.

Other than, I thought the game was pretty good. I just wish they added a hard mode.

It was my first PS4 game and frankly, one of the reasons I got one early in 2020, the others being MGS: The Phantom Pain and Resident Evil 7. Therefor, it has a special place in my heart. It was a flawed game, not nearly finished, it seems, and crammed with just too much of the filler quests that weren't fun. When it did things right, they were great – for instance the dynamic between the four characters. It was indeed charming, as many have mentioned, and I couldn't get enough of collecting recipes and having that road-trip-camping-kinda feeling. In the second half it feel apart, unfortunately, as the pacing was well off. The penultimate stage was a pain to get trough, too long, and should have been somewhere in middle. I liked the final part of the game the world of ruin, which is a FF staple and I loved the ending, especially the reveal of the significance of the logo. It was a strange experience. While FFXIII is considered to be too streamlined (I liked it nonetheless) FFXV could have done better being a bit more focused. The fetch quests were a chore, it could have been more difficult at times, but it was also somehow relaxing and just comfy. I haven't played the latest patches yet and I didn't buy the DLCs. I consider replaying this sometime soon with all the extras next time the Stadia versions goes on sale.