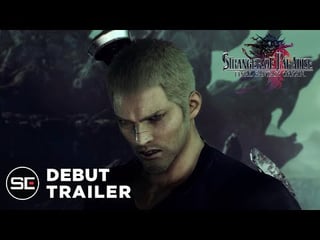 I think they forgot to say chaos

I missed what they want to do to him, can anyone fill me in?

Well they forgot colors outside of gray and brown and the WOL armor as well......

Jesus, dude. Show us on the moogle doll where Chaos touched you.

Right on the chaos.

I’ll take a cheeseburger with a side-order of chaos, please

Probably presented as a retelling but you're actually just in one of the failed timeloops (like, there only being 3 instead of the standard 4 Warriors of Light makes me think SOMETHING'S up).

I can't figure that out either.

Those kill quotes are going to get old really quick. TIME TO DIE YOU’RE DUST DIE ALREADY TIME TO DIE

why are they talking like a kids show what happened to this franchise............

This game seems pretty chaotic at first, but once I got through the chaos, I figured out these chaos-loving devs are best suited for this type of chaos. Chaos expert studio Team Ninja is well suited for chaos-inducing games, like the chaos-filled Ninja Gaiden and Nioh series. I spent many chaotic days trying to beat the Ninja Gaiden trilogy.

Just from this chaotic reveal, the initial performances and writing are chaotically bland. Chaos ensued when it turned out the cardboard protagonist wouldn't shut up about chaos. Also the three character designs look archetypically chaotic: Mad chaos man who wouldn't shut the fuck up about chaos, tough big dude who enjoys fighting chaos, and literally Prompto from FFXV (in voice and hairstyle) but with red hair and a chaotic armor design. Chaos probably polluted the designer's and writer's head when coming up with such chaotic ideas.

Nomura is a chaotic madman, and at this point, I am not sure if I want to trust his chaos-like vision. However, although this new take on Final Fantasy may look chaotic at first, hopefully as we see more of this chaos, I may turn over a new chaos leaf. Team Ninja never skimps on the chaos. PS5 owners who somehow got the console during this shortage chaos can experience the chaos themselves in a demo trial, which ends on June 24th.

Chaos sort of surrounded this presentation, and it doesn't help this chaotic reveal helped at all. However, the character's less-than subtle motivation to combat chaos and dryly spouting his chaos-filled desires left a chaotic impression on my, and certainly everyone's, little chaos feelings.

I forgot what sort of chaos impression I was going to end with this chaotic reveal, but I think I handled the chaos pretty well.

Can I be brutally honest? I was excited for this game- I grew up with Final Fantasy, and I played (and loved) Dark Souls as a teenager.

Whatever this is, it’s an insult to both franchises. The designs are bland and generic, and look like they were torn from a forgettable mid-2000s FPS; they are worse than DoC’s not because they are more outlandish- they are worse since they’re just plain forgettable. The dialogue is enough to make my edge lord, fanfic-writing, 12 year-old past self cringe in physical pain. And aside from Garland, nothing in this game feels remotely like Final Fantasy. And unlike Dark Souls, it is “dark” only for the sake of being “dark” and shocking, not to make any genuine statement about a variety of themes and issues- nor does it even have the same brooding, desolate atmosphere or the eccentric/detailed art direction.

tl;dr I hope the team manages to create something actually decent from feedback from the demo, instead of something that would make even teenage edgelords cringe.

Those character designs are terrible. What a shame. Looks like mid 00s FF edge but 15 years too late. Wtf does this have to do with FF1 ?

seriously. that trailer was dripping with "I'm 14 and this is deep" vibes.

The gameplay, the chara-designs, the dialogues... Nothing makes me even slightly interested so far.

I just can't comprehend who thought this would make a fine trailer. It looks utterly terrible and the edginess lmao.

I'm sorry, but this looks... hilariously bad. Maybe the combat will have some Nioh style fun, but that was legitimately the most cringey, amateur dialogue I have ever heard in a "AAA" video game. I am shaking my head and laughing so hard right now.

The funniest part was (after repeating "I'm going to kill chaos", "Chaos" 20 times)

EDIT: nvm the zoom on his face saying "Chaos" when he meets Garland tops it.

ALL MY HOMIES HATE CHAOS

You cant use FF1's name and come up with this shit Square. Just brand it something different like Final Fantasy Nomura Edgelord Project number 666. Ffs.

Since Dissidia one of my biggest dreams has been a FF1 remake starring the Dissidia WoL.

A remake finally happens and instead I get a grimderp edgefest full of quips straight out of a Marvel movie.

I feel you. I wanted Amano’s WoL to be the main character when we heard rumours about this game a month ago. Still my favourite design in the series.

They had the aesthetic, lore, plot, and character design handed to them on a silver platter, and instead they made Devil May Cry But REALLY Edgy Like The Tears Are Blood Or Something.

This trailer was awful. The character designs, the lines. The soundtrack was nice but that's the only good thing I can mention about it.

I thought the enemies, environments and Garland looked cool. Everything else though…oof.

They could have done a better job with that trailer. Overuse of "Chaos". I am worried they might spent too much time worrying about the story instead of having a limited narrative like Darksouls and the original FF1

lmfaoooo! Move over Shadow the Hedgehog

Sakaguchi deserves a formal apology letter from Square Enix because of this twisted abomination of FF1.

No exaggeration, this might be the worst final fantasy trailer and character designs I have ever seen.

The only thing this is good for is memes.

Worse than that, two of them look pretty damn close to recent FF characters - blond dude looks almost exactly like Cor Leonis from FFXV and pink-haired guy looks like low quality crossover between Prompto and Loqi from FFXV (again).

The black haired guy looks the most original and his design seems pretty good, but he barely gets any screen time compared to his companions so it's hard to judge.

Also is it just me, or is Chaos/Garland's VA sound like Christopher Sabat?

My main question about this is: who is this for? Other than Garland, it seems to have basically nothing related to any FF lore, so it seems to do very little for FF fans. For those who aren't FF fans, it just looks like a generic hack-n-slasher that isn't really offering anything new. I just don't really understand the thought process behind this.

They want a piece of that King's Field/Souls genre cake.

Why it has anything to do with FF1 is the real question.

Not really getting too many Souls vibes from this like the leak said. I'll still try the demo on PS5, but I was straight up hoping for Nioh set in the final fantasy universe.