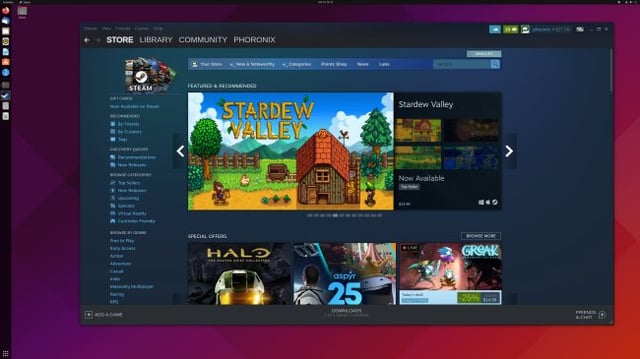 Looks like they're basically neck and neck almost the entire time.

Is it really impossible to natively run windows packages on Linux? I don't know anything about programming, so forgive me If my question pisses you off.

Not without a compatability layer like WINE, Arkham Knight used in the benchmark in the tile was in theory getting a port, but was cancelled, so it was benchmarked using WINE

There are basically 2 problems:

File Format. Linux uses the so called ELF format, Windows the PE format. Reading a foreign format is not impossible, as the OS is feeding the program to the CPU, basically. Small fun addendum: The PE format also includes a rather spacious data section, which, for example, holds the icons you see on executable files under Windows. They are embedded, Linux does not do that.

This leads to issue 2: Symbols. Symbols are basically links to other files, the well known DLL of the Windows system. These contain code, that is linked to, instead of incorporating them. However, with static linkage you can do that too. But, all of this code is written against the WinAPI. So, if Linux feeds that program to the CPU, it lacks these symbols and the code cannot be executed. So we need a replacement for these missing parts and that is what Wine does and why Wine is not an emulator. But making it behave exactly the same way is difficult, as you have to reverse engineer it. This gets more complicated with DirectX, but that is it in a nutshell.

I don't know anything about programming, so forgive me If my question pisses you off.

It's NP, this stuff is complex and byzantine, and I'm a SE.

Programs built against Windows are attempting to do things that the Linux system has no conception of, right down to the lowest level system calls. The ways and means in which Linux and Windows communicates with the hardware of your PC to perform its tasks are different and incompatible.

There are abstraction layers, such as WINE, which enables Windows programs to be run on Linux systems. It essentially gives a layer of translation for the Windows program to go through such that all the Windows centric stuff it's doing can be made understandable by Linux.

This is a very simple explanation of it all, there's nuance and a lot more to it. But that's the gist.

I agree with your explanation, but your first line

It's NP, this stuff is complex and byzantine, and I'm a SE.

Huuuuh, are you saying NP as 'no problem', or as NP complexity?

Imagine if your operating system was a human, and the program you want to run is narrating a book to you. Your usual (windows) narrator uses English.

One day you decide to use a different narrator, but this one natively speaks Cantonese. Without training it would be impossible for them to read your favourite books to you. Even if you got them training to read and speak English, there would still be subtle differences in the quality of narration compared to a native English speaker. If you spoke both languages they could read you Cantonese books just fine, and any English books that were pre-translated (ported), but for them reading English text would still be harder.

On super ancient computers you could run a program that takes over the whole computer. That is not how programs work today of course, the are confined to run on top of and together with an operating system.

So with Wine/Proton a Windows program is actually running natively on your processor, but Wine is emulating that whole interface that the program expects to talk to.

Depends. Are we talking about applications or games?

Many applications have Linux package. So if you have some specific package you just ask otherwise tun them through Wine.

Games not on Steam can be installed through PlayOnLinux

Games on Steam which do not use deep kernel DRM (like Destiny 2) they will run through Proton like native games. Big thanks to the author of DXVK, the guy is a legend. Wrote the wrapper translating DX to Vulkan because he wanted to play Nier Automata on Linux. I believe Valve (Steam) employed him immediately after his achievement.
FYI can use DXVK on Windows too and many DirextX windows native games run much better!!!!

From my whole Steam library of hundreds games only 15 do not play, some archaic haven't played over 10 years but those should be getting their Proton treatment soon. Valve is on mission to move ALL existing games into it's catalog to run on Linux through Steam Proton.

I mean running all kinds of windows packages as they are on windows. I know many software have Linux versions, so that is not what I am asking about. What I am asking is, for example, I download a windows version software installer and directly install and run it on Linux. Judging by all the replies, it seems impossible.

Once SteamOS drops I'm migrating to it on my mobiles systems and eventually my desktop.

SteamOS is already out...

Personally, I'd skip it and use Debian (myself) or go Linux Mint (new user, Debian has a lot of traps for new players unfortunately)

That's the ancient version from back when Valve was trying to make Steam Machines happen. They're referring to SteamOS 3.0, which should launch with the Steam Deck and is based on Arch Linux instead of Debian.

The trick is to leverage the compatibility layer. I am not sure that exists outside steamos 3.0.

It would be nice if AMD would solve the HDR support part for Linux !

From what I understand Wayland is ready for that, but without driver support, it cannot do anything.