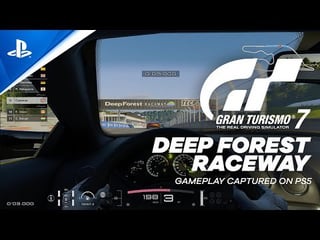 Sooooo stoked for this

I want to feel this with a Dualsense…. If PD puts as much care in that as they do everything else… man I’m excited. Wheels unfortunately don’t work with my setup, I know it’s basically “the way” to experience GT. But I hope the Dualsense just kicks things up a notch.

I hope they use the adaptive triggers and give resistance to the triggers, to help us feather the throttle and brakes.

It'll be tough to implement as well as the F1 series does.

Man from the sound design to the camera movements, and the new layout and environment. To say I'm really liking this would be a massive understatement!

This sound is spectacular, I don’t understand why so many companies settle with digital farts through a beer can as a representation of some of the best sounding engines in the world.

Pretty big change in the final sector compared to the original

Yeah I seem to remember a little hill on the side of the track I used to launch my car off of.

That was Trial Mountain, I don't think Deep Forest had a raised part there - but I could be misremembering, I haven't driven the original/GT5/GT6 version for quite a while.

I don’t like racing games much, but my dad loves GT, so I will be playing this with him.

They better go all out with the haptick feedback in this game.

F1 2021 showed that it can be implemented well, I have high expectations with this being a console exclusive!

I wish I could refund Battlefield 2042 for this.

This game franchise is the reason I’ve stayed with Sony since the PS1. Can’t wait until March 4.

Despite been a racing game fan forever iv never really delved deep into GT, I think now is the time.

I’m terrible at racing sims . This is a beautiful looking game . I’m gonna have to pick up , and stink at this game . But I’ll be happy

Anyone else just get old school vibes from the gran turismo logo.

Just looking at it brings back such fond memories growing up watching my older brother play GT 2 during our holiday breaks from school.

The nostalgia will force me to buy this game alone.

I hope the new corvette is in it

Does it seem to anyone that there Is a clutch system now?

The Clutch has been usable since like GT4 or something. In GTSport you can't use the clutch in cars with sequential gearboxes, automatics (normal, single clutch, dual clutch). But in manual transmission cars in the game the clutch is fully usable.

I have the gamer urge to build a full racing seat and steering wheel setup now.

I’ve never played a GT game before yet I’m interested in this one.

Is it only in first person or can you drive in third person too?

It’s the right blend of sim and arcade leaning a bit more into sim. But in the past there’s been two third person cams, cockpit cam, and also a bumper cam where you see no car and are a little above the road.

Are the two third-person cameras just at different distances?

There are 3rd person cameras, yes.

Ya you can usually adjust the camera to fit your preference. You should totally play this one if you’re interested in getting into racing. GT7 lookin pretty awesome.

I know GoW and Horizon are coming, but GT7 is my most anticipated game of 2022 easily, not just on PS- but across the consoles. Can’t wait to spend hours and hours on GT7.

Am I crazy or it doesn’t look that much different than GT Sport? I assumed lots of improvements are under the hood like AI and smaller graphic improvement?

Last gen version will limit what they can do.

It sucks because we probably won't see a true ps5 gran turismo until the end of this gen if we are lucky.

You probably haven't played GT sport for a while

Yeh it seems like a fairly significant step up from GT Sport to me personally.

I've loved GT since the original on PS, but I've never owned a steering wheel. Now that I have a PS5, what's the best option if I want to splurge when this comes out?

Fanatec, or if out of the splurge budget, probably Logitech G29

I haven't owned a Gran Turismo game since the PS1 but I think that's going to change when this one comes out.

Just inject this game into my veins already

Does Gran Turismo have long races with pitstops? I love the strategy involved in the F1 games with tyre management and pit strategy.

Yes. GT Sport has both. Even short races can have really fast tire degradation if you want.

The last one I played was Gran Turismo 5 (2010). In the standard single player as the driver itself, there were fairly long races with needs to change tires, pit stops etc. There was also a team management mode were you manage drivers and etc. (automating when they’d go to pit, swapping out drivers based on “tiredness”).

Mate there was a fully playable Le Mans 24hr race haha as part of the endurance series haha.

Still remember having to pause the race and leave my console running overnight terrified my dad would accidentally switch it off.

There was also a team management mode were you manage drivers and etc. (automating when they’d go to pit, swapping out drivers based on “tiredness”).

This speaks to my soul. Thank you

Dude, Gran Turismo Sport basically made me get interested in motorsport and F1 again because of this.

GT Sport is focused on multiplayer game, but it tries to be a "sober" game, not completely simulator but far from being a arcade racing game. Between consoles, it's one of the closest games you will have as a simulator as the other ones are either not released in consoles, poor console ports or have low population. Forza is amazing but even Motorsport is too arcade comparing to GT.

GT sport have small, medium and long weekly races. They change these three options every week, and the long race usually requires pitstop for tyre change requirements. Both small and medium will take 10 to 15 minutes, and long races 30 minutes. Qualifying is done through "time attack" laps you can make whenever you want and you will be qualified compared to the times your lobby rivals did.

They also have some cups, that goes through like 3 months with 2 races per week, but you only need to race 2/3 of them as valid races and try to get the most points you can. These races will have 20 players, takes 1 hours, have live qualifying (you will have like two or three laps with other cars in track to make a good time), and usually at least one pit for tyre changes and refuel too. Lots of different strategies you can make.

There is a somewhat good rating system, one for how good you are, and another for how clean you are, and you will be put into lobbies with similar players as you go uo the ranks.

Penalties used to be better, than become very bad, and nowadays its almost gone. Like, if you keep touching other cars hard and taking them off track, you dont get penalized anymore in the race (used to) but is affected in your ranks so next races you will play against dirty players. In-race penalties happen when you go off the limits of the track.

I recommend playing it, GT7 will probably feature a similar better online experience as GT Sport was kind of a "demo" for the multiplayer part of GT7.

I bought a PS4 to play with his game on. I'm glad it might actually come out before the PS6.

I played through the original game on Retropie not long ago and it held up surprisingly well and was actually alot of fun. Looking at this video compared to that, holy shit I am excited

I am SUPER glad classic tracks are still in the game to this day. Can’t wait to see the Special Stage tracks