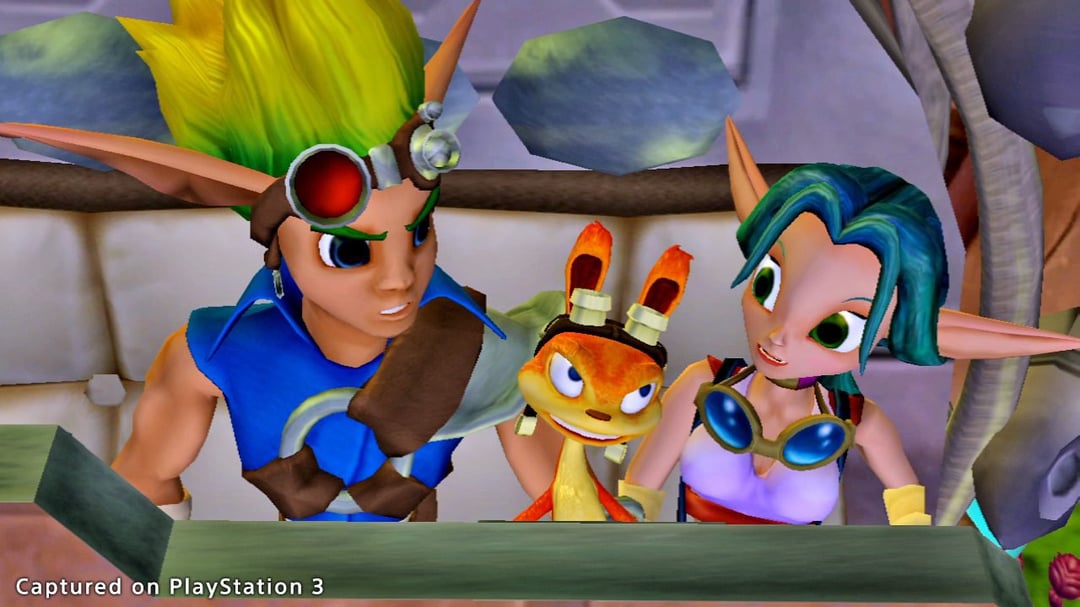 I adore all 3 of these games and will forever hold them in my heart.

I know naughty dog is on to bigger and better etc, but look at how ratchet has continued to thrive. Just imagine of naughty dog had another team working on a new jak and Daxter game.

I think the issue now lies with not enough people working at Naughty Dog to be experienced with this kind of game. The narrative in Jak and Daxter and the environments weren't realistic or super serious, and so it's hard to tell whether they'd be able to hit a homerun with this kind of game now. We've all heard of the high amount of employee turnover they have had during game development in the past.

Then again, they're a part of playstation studios, which comes with the added benefit of being able to consult with (or borrow employees of) other studios like Insomniac Games, Team Asobi, Sumo Digital, and Media Molecule. So it could turn out good even now if they make good use of their resources.

Oh it's never going to happen. Not with naughty dog. Sony would have to get a different studio to do it, like Asobi. But PlayStation has enough, arguably too many, action platformers now so I'm sure they don't see the need for it.

It's a dream... But a very nice dream

Technically we had it with jak and daxter the lost frontier and it didn’t work out very well….

That was done by High Impact Games with an average at best track record. It wasn’t an issue with the franchise itself. It’d be cool to see someone else take a go at it, especially if development isn’t restrained like TLF was. It was designed for PSP in 2009! After Uncharted 2 came out.

Yeah... We don't talk about that one

I know naughty dog is on to bigger and better

Bigger? Sure. Better? Debatable. I personally love 3D platformers more than third person shooters, so Jak for me all the way. Not saying the other games are bad mind you, just saying what I prefer.

3D Platformers are the only reason I would buy a a console, they need to make more of them especially with the next gen tech being able to push such great animations and models.

Would love to see a lot of platforming games from circa 1997-2004 get revamped.

I really love uncharted and the last of us. Clearly different audiences though

Can we get a new one? Please?

I thought the title said Jak and Daxter returns for a second and I got excited. Then I got dissapointed.

They tried prototyping a new one in the 2010s, but weren't able to come up with good/fun ideas for it, so they scrapped it. With that in mind, it's probably best they move on.

I just don't think anyone who wants to make games like this still works at Naughty Dog. That isn't inherently a slight against Naughty Dog since millions of people prefer their newer games, but the crew of workers who enjoyed making fun, colorful, exciting, animated worlds clearly left a long time ago. I would even argue the genre shift in Jak 2 was a very early indicator of that.

I think a remake in the vein of Crash Bandicoot and Spyro would be good to see, especially of the first one.

The way Jak jumped out of his rolls from ledge to ledge, or fired his guns while doing a spin kick...this was exhilarating gameplay that not even Uncharted can match.

I'd kill for a Precursor Legacy type of game. Jak 2 and 3 were also great, but I liked the innocent and cartoony game more.

Cool cartoony games are the best, and seemingly been forgotten by game designers, astros play room was kind of like that, really nice aesthetic choices there.

You should try kena . Honestly it heavily reminded me of jak 1

Haven't heard of it before, thanks! Trailer looks nice :O

Jak 2 is one of the best games on PS2. I love that series.

Jak and Daxter: The Definitive Trilogy

You better get a lot of ice!

Let a studio outside of Naughty Dog make it, it will still be great and won't take up their time and resources.

Yeah would hate for them to use reasources remaking a game.....oh wait.

lol yeah if that rumor is true it's maddening news.

I mean Lost Frontier was alright, but was largely ignored.

It was just sort of forgettable, and the flying sections weren't great, and I remember the final boss was major ass.

Shit, Naughty desperately needs to do something other than over over-the-shoulder quippy story action games. LOU2 was great but Jak would feel "new" from them at this point.

I absolutely love their newer games, but I would love them to return to it too. I just don't think you could ever convince Sony that this would sell as well or be as popular compared to what they're doing lately. Maybe they could make the best open world platformer ever made though.

I just want a remaster for the ps4 gen

I love all of these games and it pains me to seem them constantly celebrate a beloved IP all the while you can't play a decent version of 2 or 3 on PS4 onward due to shitty ports.

Can't believe such a big, beloved title gets a shitty release and nothing is said.

I would just be happy with a new modern port of the HD collection. The ps2 emulated versions on PSN are full of graphical glitches and it gets worse each game in the series.

Controversial opinion but I would take Jak 4 over TLOU 3. I know it wouldn't be a good business move for ND, but I'd prefer it.

I loved the gameplay and style of the first game way more then the next 2. The dance and music that go with collecting a power cell worked so well.

I’ve made peace with the thought that we’ll never get a Jak 4 - but if any game deserves the Crash Bandicoot esque remaster treatment, it’s definitely Jak 🙁

One thing that’s incredible about Jake & Daxter is how well it holds up. Not just from a gameplay standpoint, but from a technical standpoint. The lack of loading screens is still incredibly impressive to this day, but the animation still gives modern games a run for their money. It’s got some of the most expressive characters ever in gaming; they feel so alive, and this was at a time when a lot of games’ facial animations basically just consisted of a few alternating textures.

First one was the best one. The other two were good but the first was magical.

Loved this game when I was young.

I really love the mythology of this series. It's really original and creative and I can't think of many games that do that.

Would love an extended remake of the first game, they could expand the world with new areas and take some of the features from 2 and 3 like the hoverboard and situational weapons

Gul and Mia are still in the dark eco tank

Jak and Daxter PS5 remaster or even a reboot would be amazing.

Been waiting naughty dog to get off their asses on this for a decade. Druckman is to stubborn.

They already said in their anniversary documentary that jak and darter were dead, the people who made the og’s were no longer with the company, and that it was a thing of the past and they moved onto new stuff

Probably for the best they would bastardize the series

So why not sell the IP?

It would probably be shit if they re made it. The people who were behind it left, and they’ve definitely moved on to other types of games. They aren’t capable of re capturing what made it so great back then.

Sucks but it’s better to leave it as good as it was and not ruin the legacy.

I don't think PlayStation wants to spend the time, effort, and money, on a game like Jak and Daxter. It's one of those games that, assuming you get a proper new-generation improvement, will cost them time and effort and require a particularly skilled staff to pull off. The old games were reaching a weird sci-fantasy GTA to an extent and any proper evolution in the series will be a CP2077-level undertaking (perhaps not in graphical realism, but in all other systems) and there are absolutely zero PlayStation studios that can pull that off if development began today, and only a handful that can learn to do it given enough time.

And as much as PlayStation likes to claim otherwise, they are indeed risk-averse. Most people and companies are. They don't want to spend that much hoping the 30-year olds that played the old games still like them.

It would be closer to a rift apart level undertaking considering the genre and mechanics being so similar, but the brunt of the expertise would be in the writing department if they went back to the franchise. Either making Jak 4 with a consistent and good narrative or rebooting the franchise with a clear and planned direction/tone would be the biggest challenge.

I personally think Sony would be insane to have IPs like Ratchet, Sly and Jak and not have all 3 dominating the platforming genre with the mascot pull.

The person who created the jak games has long since left they were his baby. Druckman will never greenlight another one as long as hes in charge.

If they can remake Jak and Daxter as well as Ratchet and Clank I’d buy it in a heartbeat, I think them scrapping was just laziness or something it would be fun as fuck

I will never lose hope. And considering how well the new ratchet did and it’s 70$ for a 10 hour game. A new Jak and Daxter would blow it out of the water.

One of my favorite games of all time. Grew up with these games and played them so many times over and over.

Such an odd franchise as whole. 1st was a 3D traditional platformer, 2nd was a run n' gun action platformer, 3rd was an open world action adventure, followed up w/ a combat racing game. They were all good to great games, and where Naughty Dog really honed their craft ahead of Uncharted & TLOU series.

I'm an Xbox player but PS2 was my baby back then.

Jak IV will make me buy a PS5, (or wait for the game to be available on PC like the rest of the PS studios games will eventually).