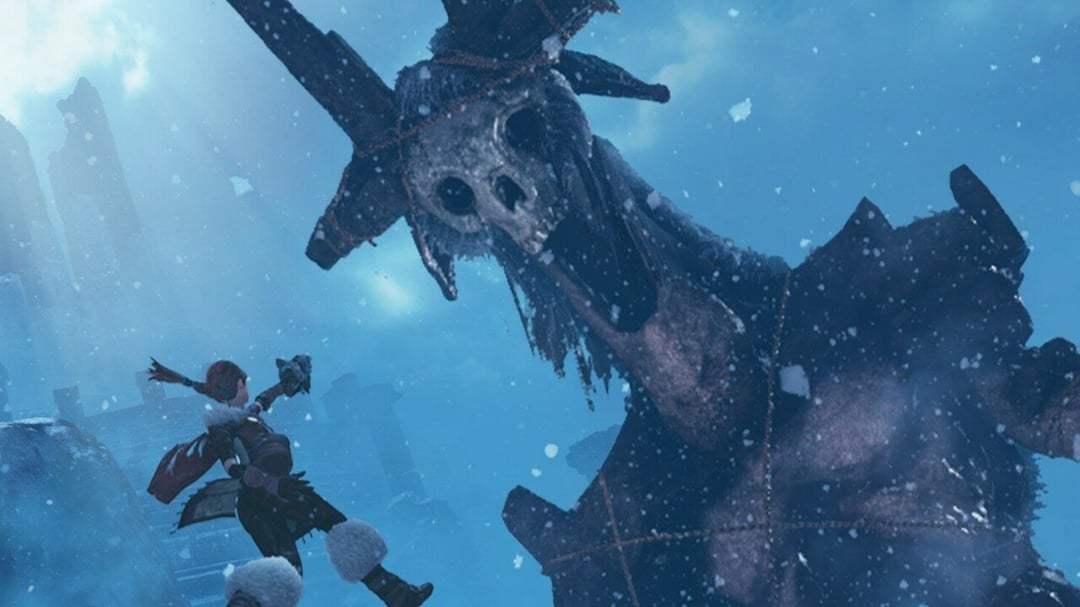 If anyone’s on the fence, don’t let this be the end all be all. I’ve been playing it for 10 hours or so and have been loving it! It’s like a mix between Shadow of the Colossus and Breath of the Wild. It’s not perfect, mind you it’s made by a three person indie team, but for what it is I’m having a BLAST!

I Kickstarter backed this game, it was a neat process watching the game come together over the years. Not bad for a tiny team.

That’s awesome! I’ve been following it for years. It’s an amazing game, especially for a team of just three people. As a Shadow of the Colossus and Breath of the Wild fan, I’m very impressed!

I dunno anytbing about this game but I like that the giants look more “scary” than SotC. Always enjoy spooky giants. I’ll never stop being bummed about the incredible concept art for the BotW Guardians they ditched for the goofy ass final design

I agree! The wintry setting and the creepy titans make for a really unique atmosphere. I’ve been having a ton of fun just exploring.

I really didn’t find it to be so “heavily flawed”. For a tiny indie team I think it’s pretty polished. Personally, I had a ton of fun exploring Hyrule in BOTW and engaging with the crafting and survival mechanics. Shadow of the Colossus is also one of my favorite games. If your tastes are similar I think you’ll enjoy this game. Some of my friends bought it too who are in the same boat as me taste-wise and have been loving it.

I need to get this one, bought Chorus even though it was supposedly flawed but it's quite fantastic. I'm sure this is at least worth the play and supporting the dev.

Not a bad price at all, really. I bought it and so far it seems like a good take on mixing Breath of the Wild with SotC and it pulls it off well. I know it's not super-polished or anything but for a game from a small indie dev, this is kind of wild.

And thaaaat's where it lost me. I hate managing shit like that, I hate survival mechanics. Temperature is one thing if it's as simple as "drink an elixir every 10 minutes" or "wear special clothing in this area" like in BOTW, but outside of that, they can miss me with that stuff.

There’s also very customizable settings for general difficulty and survival difficulty to the point you can nearly turn off the survival elements. Don’t knock it till you’ve tried it!

Oh really? Ok, my interest has been piqued again.

Different strokes for different folks. The exploration and engaging with the world through survival mechanics were some of my favorite parts of Breath of the Wild and Praey for the Gods emulates that well with its glider and hookshot to ease exploration. Having to hunt and gather and sleep to preserve my strength before each new fight made the “journey” between titans more memorable and immersive. I loved wandering through the Forbidden Lands in Shadow of the Colossus and Praey for the Gods took that element of exploring a strange but beautiful world and added more fun ways to play a “game” while doing that. And the boss fights are seriously on par with SotC. It’s incredible.

The "survival" mechanics in BOTW were completely fine by me, because they were very light. Didn't need to manage hunger or anything, and temperature/climate was as easy as just swapping gear.

If someone could confirm this game is just like that, then sweet. But managing something like hunger where just running around in the same area is going to deplete it? I hate that kind of thing.

I absolutely hated it. I've played every single zelda game that's come out on any platform and Breath of the Wild is the only one I've never completed because of the durability bs and the food/recipes poor design.

I don't mind it as long as I can turn it off. Subnautica did it perfectly. I turned off hunger and thirst and enjoyed myself. If I had to deal with those it would have definitely brought down my play experience and some games with these systems I will never play because they are too annoying or punitive. I'm trying to play a game not have a 2nd job.

Of course it's flawed, it even has a typo in it's name!

I’m assuming you’re joking, but for anyone who doesn’t know, Bethesda sued this tiny indie studio because their game was originally “Prey for the Gods” and they own a game called “Prey”. Very stupid. They settled with being able to keep their logo with “Prey” but when it’s written it has to be spelled “Praey”. Yes, I’m totally serious lol

Well that sucks, I just bought it and downloaded it like 10 minutes ago

Genuinely curious, did you read any reviews before buying?

It's just one guys opinion. Pretty sure it's the only review for this game so far. It could be an outlier.

I’ve watched two reviews from Shadow of the Colossus fans who really enjoyed the game! If you like SotC and survival mechanics this is THE game for you

Have you played it since posting?

I haven’t gotten very far in, I’ve just beaten the first boss, but I haven’t encountered any sort of bugs yet. I disagree with the review. It might help that I haven’t played Shadow of the Colossus before, I was planning on getting to it after Praey for the Gods, so it doesn’t seem unoriginal to me

Thanks for this. All I could see were reviews of the early access versions

Who could have guessed that a lazy mashup of hits would have lazy QA?

While the review points out the way it was executed wasn't the best, the game itself doesn't look like it was made with a lazy attempt at all.

It's not lazy, though.

Would love to see this concept done by a team with a AAA budget.

Support these devs then. The more we vote with our wallets the more we’ll see games like this

I know i can pick Story mode, but making the game longer with crafting and survival mechanics with including small monsters is really lazy.

One of the reasons why SOTC was so successful its because it broke a new ground of literally just putting 16 enemies in the whole game.

The environment navigation was the key of that game and it was perfect balance it didnt let a single moment be boring nor repetitive or lazy.

Unfortunately this game only has the huge boss aspect and the climbing aspect. Nothing else beside that that scratches that etch.

But then it would just be Shadow of the Colossus? Praey for the Gods takes clear influence from SotC, but builds on it. I think it’s awesome. I’ve been having so much fun with the survival systems

If I wanted to play SotC, I would turn on SotC.

Do you tell every Nioh or Surge or Mortal Shell or Hollow Knight player to just play Dark Souls 1?

Shadow of the Colossus was a great and influential game. It’s awesome to see developers taking inspiration from it and doing their own thing / building from its premise

Thankfully, SotC will always be there for you. For anyone else who wants to explore a new setting with a very different biome, fight new and unique titans, and have more freedom to explore an open world, craft, and survive, they have Praey for the Gods.