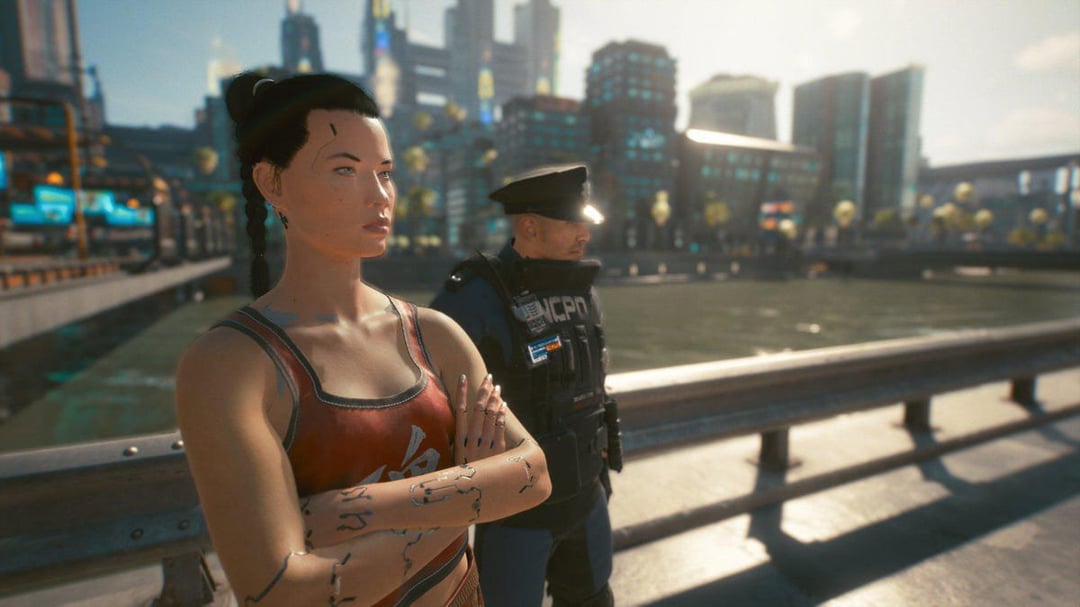 So, why was this? Quest Director Pawel Sasko got asked this on one of his recent streams, and the first portion of his answer pushes back against the idea that “all” open world games have a system like this. He brings up the upcoming Sonic open world game and Elden Ring as open world games that won’t have police chases.

This literally can't be real. This can't be the answer that they gave.

No but oblivion did…

I didn’t see no dirty coppers in Halo Infinite neither

Did you know you can't play with PSG and Mbappe in Gran Turismo 7? What a shit game.

Even worse, did you know that you can't play as Batman in the upcoming Spiderman 2 game?

Holy fucking shit I am dying at this. Did he really just say that ELDEN RING won't have police chases? Yeah no shit Sherlock.

Stop! You have violated the law…

Seriously, did he said that?

The Chad Miyazaki vs the virgin CD Project Red

"WTF you mean, you want the NPCs to be able to move? We don't do that high-falootin nonsense here. Just settle for 2.5D sprites and stop complaining."

"Sasko says it was a combination of the technical limitations of the
engine, and not enough time to make it work before release, so it was
something that they eventually just gave up on, which is how we got the
current system which teleports police to you, and never has gangs chase
you down outside of the little clusters you can provoke on the map."

Yeah this game certainly should've been canceled for previous gen consoles. I'm aware they would've gotten a bunch of backlash, but still. Also should've been delayed at least another year

Game was released a year too soon period. Maybe 2. I think if the game was fixed in terms of content and bugs then last gen users would have understood trash performance/pop in as the best they could do. But in its current form it’s just a joke. Having the game be a buggy mess in terms of content, playability, and performance then there’s nothing forgivable.

GTA 5 had police chases and that's running on hardware from 2005, so I don't buy the excuses.

Last-Gen was Next-Gen when they started to make the game. The game, which they claimed is made for Current-Gen is not even released - more than a full year after "release" - on Current-Gen.

Agreed. Problem is that management never would have gone for either of those. The losses they took from refunds don't come even close to the amount they would have lost by cancelling those versions. Pretty sure the devs were pushing for more delays as well, but management wanted it out for Christmas season last year.

Even a year after release they haven't made many worthwhile fixes to the game. So I don't know how much another year of dev time would have improved this mess

Delaying it for last gen wouldn't have made a dent.

Foundationally, the game is crooked. Blaming it on PS4/One isn't going to fix what was wrong with the game.

Technical limitation? Gta III did this on ps2

And even gta I and II did this

“We only had a seven year development cycle. We couldn’t get a system in place for cop chases even though 20 year old gta games had it running on hardware the equivalent of a toaster by today’s standards.”

I don’t understand why they keep trying to explain themselves. It just makes them look more incompetent.

Admit your mistakes, it was a failure. Not the devs fault, this is what happens when you get greedy and rush development.

Imo they should fix the game, add the planned content/changes and then lay it to rest. Go back to remaking the Witcher 1&2 for next gen & PC, remaster #3. Stick to what you’re good at.

What I don't understand is why couldn't they have figured out how to make a, I don't know, a drone/flying robo-like police system at least? And then after those encounters, the police then start showing up to the scene or crime event, instead of them unexpectedly and literally teleporting in through walls.

If they couldn't figure out how to do car chases, but couldn't at least figure out smaller in scale enemies to pursue players in the game? Were there something akin to drones and other robots in the tabletop version?

"cyberpunk 2077 director makes excuses for why he told his devs to create an open world game without any of the open world immersion".

Ah yes finally it was due to them following the footsteps of elden ring and sonic which don’t have police chases either.

The infinite police spawning was one of the big reasons I disliked this game. Just ended up being another thing that made the city/environment feel superfluous and lackluster. Though I guess the driving was pretty ass in the game as well so it probably wouldn't have felt great in some aspects regardless, wonder what their explanation for that is.

So basically they sold a crock of shit that was behind the time by at least 5 years but blames it on limitations of the engine(that’s just their scapegoat and excuse for not doing their best). They had my respect until they released this horrendous piece of work.

"The second part of the clip that got caught off does get into an actual explanation of why they didn’t have a police chase system. Sasko says it was a combination of the technical limitations of the engine, and not enough time to make it work before release"

Not putting police chase to the game because they didnt have enough of time to make it work before release? looks at Cyberpunk... Yeah seems about right.

This from the company that kept saying it'll be released "when it's ready".

Wasn’t there a video showing how the Lego City Stories Video game had better driver AI than CP2077? It might’ve had car chases as well. Why are they acting like getting the AI to do basic things is such a daunting task?

releasing this game on last gen was a huge mistake

It could have run if properly developed. Red Dead 2 is leagues better looking and that came out 2 years earlier

I guess I should stop hoping for a finished cyberpunk game to come out. It doesn’t sound like CDP is really doing anything to deliver on the promises they made during the marketing phase for this game.

I can’t believe I clicked this. What a HUGE waste of time. I was going to go to bed and sleep like a drunk baby but now I have this neuro-degenerate garbage keeping me up.

Any questions containing “Why didn’t Cyberpunk 2077…” is automatically answered with “Because CPDR can’t do it.”

Disaster is a game and company

The funniest part is that I'm pretty sure the CEO of CD Projekt had come out around the time the game launched and assured everyone that the police responses in the game were being treated as a 'bug'.

This is the second time n the last few weeks I've seen CDPR try to rewrite history and it's pretty telling for how underwhelming future updates and the PS5 versions are likely to be. If they are trying to defend these things as non issues, they've likely already decided they won't be fixing these problems. I will never pay full price for A CDPR game ever again.

And the game still randomly crashes

Because fuck the boys that’s why

Because it was suppose to be there and didn’t have enough time to add it. The game should’ve been delayed for another 2 years