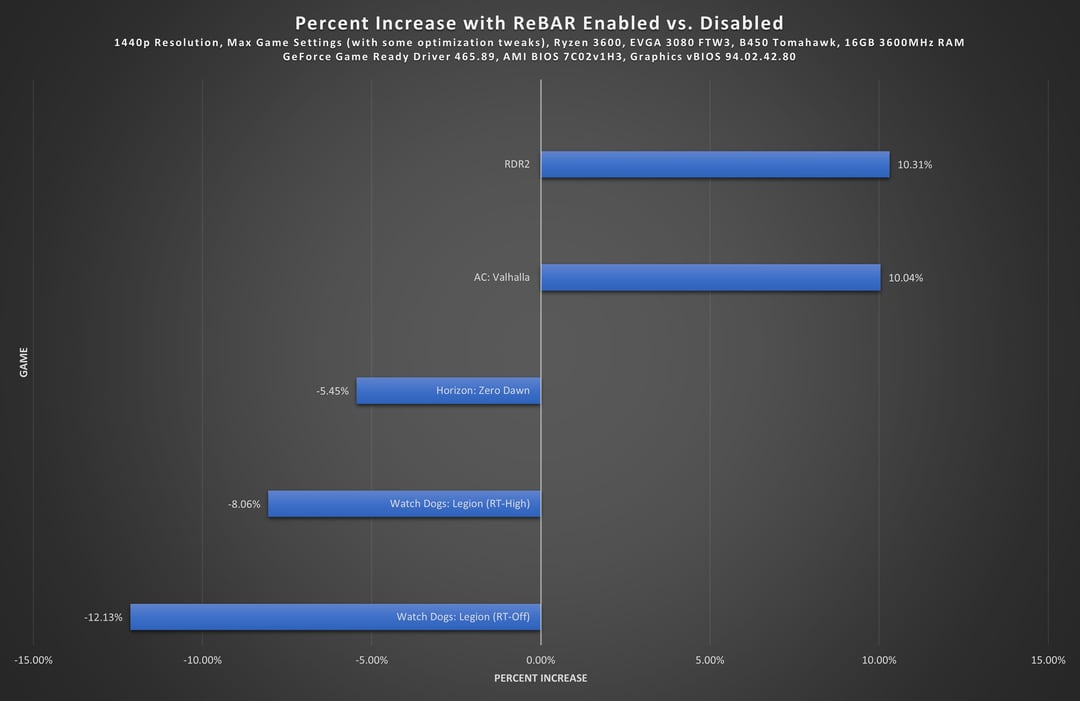 Disclaimer: I know that Ryzen 5000 series CPU's are the only officially supported AMD CPU's for resizable BAR with NVIDIA GPU's. That said, being a Ryzen 3000 user, I'm curious how performance in supported games scales to technically unsupported CPU's.

As many are now aware, NVIDIA has recently updated its drivers and GPU vBIOS to offer support for resizable BAR. NVIDIA's approach is slightly different from AMD's, where NVIDIA is maintaining a "whitelist" of games at the driver level that ReBAR is enabled for. From NVIDIA:

In practice, the performance benefits of Resizable BAR can vary substantially from game to game. In our testing, we’ve found some titles benefit from a few percent, up to 12%. However, there are also titles that see a decrease in performance, so NVIDIA will be pre-testing titles and using game profiles to enable Resizable BAR only when it has a positive performance impact. That way you won’t have to worry about bugs or performance decreases, and won’t have to rely on the community to benchmark each title and discover whether Resizable BAR is beneficial in the games you’re playing.

In theory, this is fantastic as you do not have to edit your UEFI firmware settings to enable or disable reBAR on a game-by-game basis, dependant on whether that particular game sees a performance increase or decrease, respectively.

Seeing that their testing was done with a Ryzen 9 5950X, I was curious whether this translated to the Ryzen 3000 series chips, specifically the Ryzen 3600 in my machine. After running some benchmarks on 4 different games that reBAR is enabled for on NVIDIA GPU's, I experienced mixed results:

Based on these results, I'm curious whether other systems with Ryzen 3000 series CPU's are seeing performance regression in certain titles as well. While I appreciate the theory behind the whitelist approach of games at the driver level, it doesn't seem equitable if NVIDIA is conducting their testing with CPU's like the 5950X. Seeing as I experienced regression in two different titles on their whitelist, I highly doubt there are different driver-level configurations for different games on a per-CPU basis.

Offering gamers the ability to disable or enable reBAR for specific applications through NVCP would likely be the best solution here, removing the hassle of changing UEFI firmware settings to enable/disable reBAR.

What it really comes down to is how the game is coded and how it handles memory management, which falls on the game developers (points at Watch Dogs, and look at GTA V taking 8 years to correct slow gameload issue that only affected the online part of the game [point about the ability of devs]). Unfortunately this is variable that is beyond user control.

Right, and that's exactly my point. NVIDIA is attempting to remove the headache associated with enabling reBAR through UEFI firmware settings for specific games by creating a profile for each game at the driver level that disables reBAR if it would result in a performance regression. The results on my system show that this isn't always the case, as two games I benchmarked did experience performance regression.

What is not beyond user control is allowing me to disable reBAR on a per application basis through NVCP, thereby eliminating the need to adjust settings in UEFI firmware depending on what game I am playing. This gives users more control over their specific hardware configuration, and should I change my CPU down the road, I can re-enable reBAR in NVCP on those specific games that would benefit from that.

This is the same on Radeon as well... more driver updates, result in more games that can be filtered.

I wonder in the future if developers code to take more advantage of this, if performance will suffer with resizable BAR off. We might see a big regression for older GPU's that don't support it.

I'm sure the devs are well capable of fixing stupid shit like this and wouldn't leave a personal project like that. It's up to management what they're working on though and that's probably things like coding for rocket boosters on mopeds or something.

Probably too low of tier and old, but any chance of my asus a320m motherboard supporting this eventually?

What about X370? Will my Crosshair6 be able to do this? Historically ASUS is slow to update this kind of stuff. 3900X/3060Ti for reference.

"Please note, some motherboard manufacturers have unofficially extended Resizable BAR support to prior generation products. Your mileage may vary utilizing these solutions."

I wonder how an AMD card would do in this test vs nvidia - as far as gains/losses go.

I have 5800x and I am also seeing performance regression in Watchdogs legion. I doubt it’s the CPU but I have seen others with regression in watchdogs legion in particular after REBAR was enabled. I turned mine off till I figure out what is going on. Maybe after Nvidias next patch I’ll check it.

Interesting that your 5800X saw a performance loss in their targetted games with your officially supported hardware. What resolution were you running the game at when you experienced the performance loss?

Was t Nvidia going to make a white list in their driver so it's only enabled for games that benifit from it, or was that not possible to do?

Did you turn off hardware accelerated scheduling ? rebar doesn't work with that on, maybe that will fix the performance issue for you

"Did you turn off hardware accelerated scheduling ? rebar doesn't work with that on" - Do you have a citation for that? I haven't seen that mentioned thus far during this week's resizable BAR rollout.

Hardware accelerated scheduling is disabled. There's some huge performance gains, so it isn't all bad news on my system, it's just very game dependant and not across-the-board improvement for enabled games like NVIDIA suggested with their custom profiling.

Also for XOC vBIOS, apparently there are reBAR variants. Per Jacob at EVGA:

If you have the XOC it will apply the Resizable BAR version of XOC BIOS.

At the end of the day I'm getting a huge boost with some games, which is great. I would have loved to see WD Legions see some of that reBAR love on a Ryzen 3600, since that game needs all the help it can get performance-wise.

I don't want to offend anyone bud didn't AMD and nVidia mentioned 5000 CPU series only in their official documentation?
I get it, you can turn it on for 3000 series since board manufacturers decided so but as long as I understand it means that all optimizations by both vendors will be done for 5000 series CPUs and newer.

There is official support for the 3000 series on current gen AMD GPUs, Nvidia might add support for it down the road.

Yep, I've just checked AMD web pages and it says:
Select AMD Ryzen™ 3000 Series Processors. So yes, basically it works on 3000 series but not all. It is on nVidia side now to add select 3000 series as well.

For official support (so far), yes

Yes exactly. The reason a lot of people are able to turn it on for 3000 series CPU and even for 2000 series CPU is because motherboard vendors decided to leave it there, I've seen people claiming turning the feature on for Radeon 5700xt.
It is similar situation as it was with some x470 mobos, there was PCI-E Gen 4 enabled which then AMD forced to turn off.

Even though Zen 2 was not officially stated I was able to activate it on a 3700x/3080 setup. I played Control and see lower temp as well as higher max/min FPS. I will disable BAR later and confirm if the changes are from BAR or the new nVidia driver.

No offence taken. I know that my CPU isn't technically supported by NVIDIA, which is why I was curious to see how their whitelisted games scaled on my Ryzen 3600.

Going into this, I was hopeful that all the games on their whitelist for 5000 series CPU's would show positive performance gains on my system. Realistically, that wasn't likely to be the case, which is why I wanted to share my results with those curious and see whether users with similar systems could corroborate those results.

Any other way to turn it off without going through BIOS?

AFAIK BAR can only be disabled in BIOS.

Thanks for the info!

If you run this driver on a 30 series card without all the necessary requirements for Rebar met, YOU WILL experience an FPS loss on vulkan titles if you run an AMD cpu with Rebar enabled in the bios.

This fps loss may also remain for any vulkan title that is not yet whitelisted.

Can you elaborate on the requirements?

Game is in the whitelist.

It seems that, more and more, the AMD 6000 RX series GPUs are nowhere near the NVidia RTX 3000 series in terms of performance.

Currently, yes. I have no idea if NVIDIA plans to add support for older GPU's in the future.

AMD came up with the idea, it's called SAM and works on the RX 6000 series. Nvidia are merely copying them.

You'd think the people who put it in the PCIE specification had something to do with it too :S

What about minimum and 1% low FPS? I lost both in RDR, even though i had average FPS uplift 🙁

Is there an easy way to turn ReBar on/off without rebooting and going into the bios?

Results similar to yours but with 5600x. It's simple is that either Nvidia lying about games profiles or their driver 465.89 is shit even without ReBar on or which I suspect is real case: both.

ReBar on Zen2 is just works ©, Nvidia's "per game ReBar profiles" are not existing or not working.

Because you can clearly see that fps is lower with it if you compare to previous version. Also notice that games like RDR and Valhalla also having performance increase compared to previous drivers.

if we talk for Watchdogs Legion. This game is clearly whitelisted by Nvidia so ReBar is enabled, however maybe because of different hw different people can have different experience we just can't be sure unfortunately

Msi bazooka v2 450, amd 3600, evga 3070 -flashed bios, changed windows partition from mbr legacy to uefi, updated video card and did the auto vbios update with its precision software, all to get a yes on resizable bar lol

Have you had the opportunity to run any comparison tests with the built-in benchmarks for any of the compatible games on NVIDIA's site?

This could easily be due to flashing the motherboard bios if it is the CPU scores that are lower.