Trying it out at the moment, just sitting here downloading and temperatures are sitting at 78°C.

I'm using my brothers old AIO, a corsair H115i and I'm wondering if I've set it up properly, or should I be expecting these kind of temperatures?

If you're doing nothing but downloading with a browser, that seems crazy high. Those are temps you should be hitting only when playing games or some other CPU heavy things.

If you're doing nothing but downloading with a browser, that seems crazy high.

It's normal for Zen 3

So it's 28c worse than even Zen 2 which was already at 50c when almost idle?

78c is hotter than my air cooled 5900x gets during cinebench nT. It sounds way to hot unless the ambient temperature is crazy high as well.

No it's not. lol My 5800x tops out at 70c under full load unless I'm doing something outlandish like running Cinebench.

What's your CPU usage at? 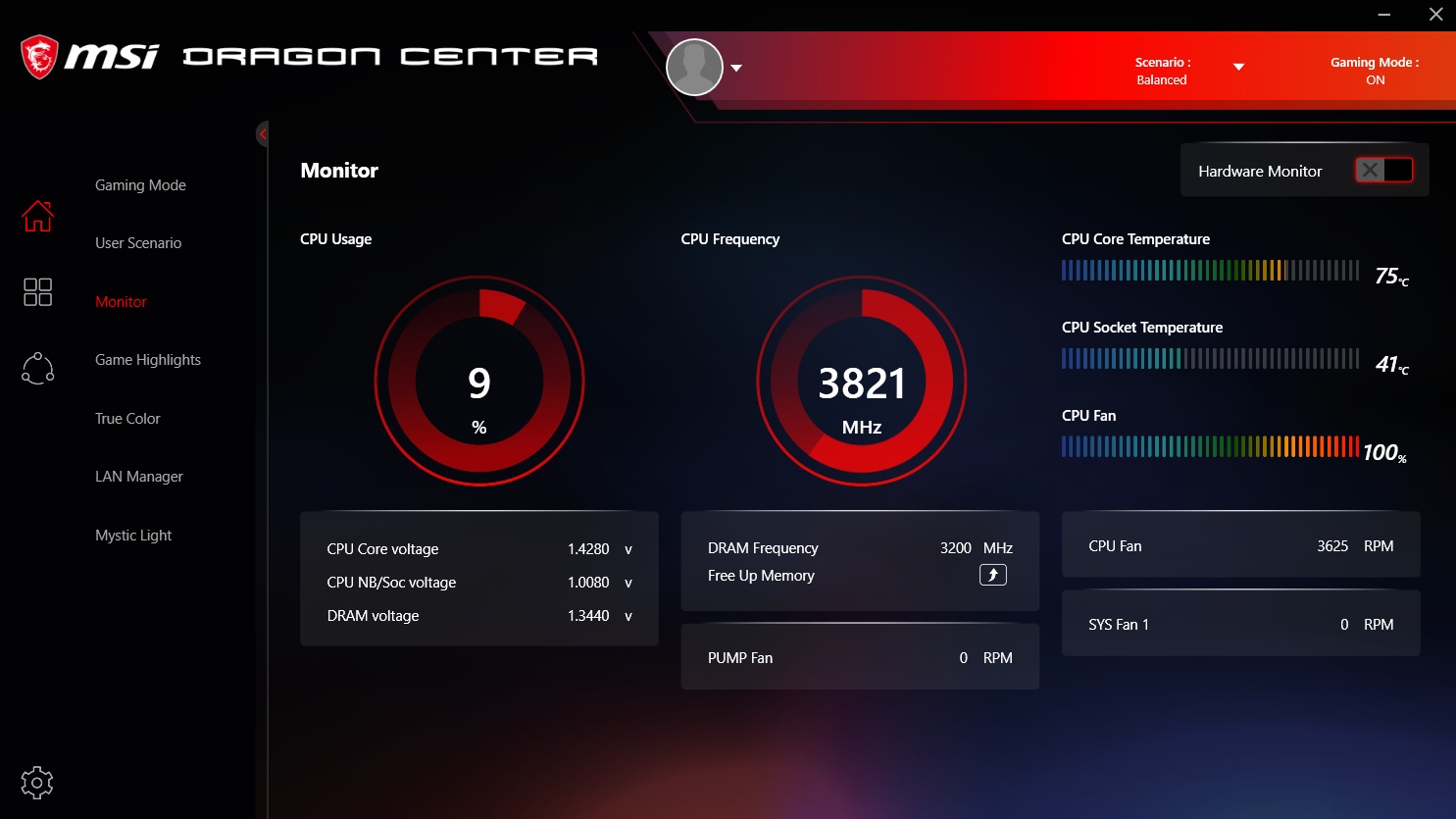 Uninstall Dragon Center, it uses a shit-ton of system resources.

Can you help with any settings?

PPT: Package Power Tracking, Max limit you want the chip to run at in Watts. 120 is a happy medium.

TDC: Thermal Design Current, Max amount of current in Amps your MoBo can deliver to your CPU sustained.

EDC: Electrical Design Current, Max current in Amps the CPU can use in short bursts.

Would help your temps, just be sure to test stability before locking 'em in.

If you want to read / learn about it more, check this thread out:

Did you clean off the cooler before installing?

Yep and I put on some fresh Antec Forumula X

My 5950x did the same thing. Helped it a lot by setting my idle case fan speed higher: about 1000rpm. The ramping fans up to full speed in two steps after about 65c. Now it’s around 65-70 while just downloading. 75 or lower in game

I had to remount my H115i platinum a few times on my 5800X.. tightening the screws down as hard as I can with my fingers (not overtorqueing it with a screwdriver) yielded the best results for me. I used Kryonaut paste.

However, even with that, it would reach 90C during synthetic benchmarks like cinebench. I was able to tame those temps by using curve optimizer and adjusting PPT, EDC, and TDC values in the advanced PBO options. Dropped the temps to 84 C under synthetic benchmarks but dropped less than 1% from the scores.

During gaming it usually hovers around 70 C, sometimes reaching up to 81 C but usually only during loading sequences. 80 is rare during gaming. Anything under 95 C is considered ‘in spec’ by AMD, so seeing 80 C occasionally during gaming does not concern me.

O.k, I watched a video on Curve Optimizer and set all cores to -20.

But what are those other settings u mention?

Depending on your board, there is a core boost frequency offset in PBO settings. It can be set in increments of +25 if I believe. So 25-200MHz. I set mine to 200 with -20 undervolt, but not all CPUs are the same and it is unlikely you will be able to run at those frequencies unless you also got lucky.

Start with +50MHz, and push it up until you get crashing in your desired stress test.

Under the overclocking menu of your motherboard, find "Advanced CPU Configuration", then "AMD Overclocking". Set "Precision Boost Overdrive" to Advanced, and then "Platform Thermal Throttle Limit" to whatever temperature you'd like to see at maximum.

Yes, you'll lose some very miniscule amount of performance, but if you feel better then do it.

That seems hot to me although it is within the range that AMD says is normal for these CPUs.

Runs hot at stock settings, install Ryzen master and drop the voltage to 1.2 and u won’t go over 70 degrees for daily use/gaming and idle around 30-40

I did a load optimised defaults on my motherboard and just turned on XMP for my RAM.

After that my tempertures seem better, at the moment I'm sitting at 48°C.
I ran Cinebench, which topped out at 90°C and gave me a score of 14931 pts, so things seem a little better.

But yeah, I'm still looking out for hints to help lower the temps a little more.

Not sure what you are using to check temperatures but that doesn't sound right. Use Ryzen Master AMD's official tool or HWinfo, anything else probably isn't accurate. Some AIOs just are not great for the layout of the chiplet design of Ryzen CPUs. For a long time AIOs have been designed to cool CPUs with the die in the dead center. Which before Ryzen chiplets became a thing was perfectly fine. On newer Ryzen CPUs some AIOs just aren't as great.

Hitting 90C in Cinebench isn't uncommon as it's a very heavy all core workload but the majority of time playing games or doing most anything else you will never get to 90C. 90C is the safe thermal limit and the CPU will throttle to stay at or below 90C.

You certainly can tweak settings and attain lower temps which you are free to do but I don't think you need to do anything. I believe you might be seeing a false temperature reading from some software that can not correctly report Ryzen 5000 temperature.

Make sure your pump speed is at 100%, set a decent fan curve and enjoy your upgrade.