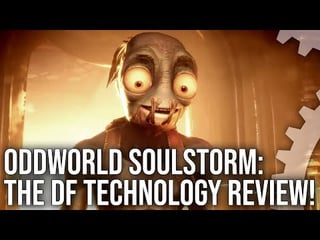 Goddamn, how does a side scroller not hit 4k/60?

It feels quite poorly optimised tbh. It should absolutely be 60fps on at least the PS4 Pro

Does anyone other than super hardcore people try to play this game doing the “positive karma” route: the game already seems fairly difficult but playing it trying to get positive karma seems like it would ramp up the difficulty so much more lol. And as someone who generally likes to have the “good guy” ending when playing a game that gives u a choice it made me kind of nervous

So, if you mean positive Karma, I believe you’re referring to the pacifist style ? Well I killed most enemies in each stage and saved majority of Mudokons in each level and still got the good ending. Some parts are down right impossible without killing a slig, believe me.

Yeah that’s what I’m talking about. I’m not very far in. I only beat the second level recently but I finished the level with negative karma lol. Maybe I just didn’t save enough people

The game is actually quite good, but only if you go in with the mindset that it's a small title from a small team with a small budget.

I feel like some people are propping this up to be some PS5 showcase and it is not that. It's buggy and isn't visually polished. It has a great look, and if they had a big team and months to optimize it, it would be much more of a looker, but that just isn't in the cards.

I think it’s because the cutscenes look so good especially for a passion project on such a budget. The game has heart and stays true to the original and the pitch presentation from 2017, for a game that was in development for so long with such a small team it deliverers on the promise they set out

Never played the oddworld series before and I'm enjoying the hell out of soulstorm. The game is so much fun.

Same! I tried it because I have nothing else I want to play at the moment. It’s been loads of fun so far.

Really enjoying the game. The only thing I detest is the weird “ladder” sections where you’re fighting in the foreground and have assorted sligs kill Mudos in the background. It just feels unnecessary, and takes away from the puzzle solving aspect I enjoy (each encounter is a mini puzzle IMO).

Loved the cutscenes, but found the gameplay just way too dated to enjoy (personally). This feels like a relic from the past, and is certainly interesting in that regard.

Agree, cutscenes are great and gameplay feels old and sometimes boring. I just want to continue to see more cuscenes but the gameplay makes me think about that.

I’m unsure if the game so far, but I am a bit of an Oddworld purist since I’ve played both Oddysee and Exodus many times when I was younger.

The new movement system might seem like an obvious improvement but the level design still seems to be created with the old, determined movement system in mind, meaning that controlling Abe can seem a little wonky.

The scrolling camera is another point that seems like an improvement but I’m not too sure. Granted I do think so far it’s better than New N’ Tasty’s system which had weaker art direction compared to the PS1 original but also is more ambiguous in regards to how the gameplay elements detect the player (Having pre rendered screens in the original meant you know EXACTLY what an enemy could see and how far the chant suppressor could reach you) which was never an issue in the original.

Both of these seem to have improved in Soulstorm, the art direction looks better and there are some adjustments to give a clearer idea to the player of what can detect them, Sligs have a much clearer line of sight and the chant suppressors change their animation when they can detect Abe nearby, though the distance seems to differ from to the other.

There are other factors that also seem rather pointless, the medal system of mini achievements and the crafting system just seem like needless contemporary design mechanics that add little to actual gameplay loop. Along with the physical, in world checkpoint system, it wasn’t necessary in New N Tasty, and it still isn’t now. Just have a invisible checkpoint at the start and end of every puzzle encounter.

Sure you might have complainers that don’t like having to do a portion of a level again if they die but it’s much better than triggering a checkpoint during a heated slig chase and caught in a death loop, also it means that the player doesn’t know when they will come back so they can’t make risky decisions to save Mudokens then back out over and over again until they save them all, they would have to deal with the consequences like Abe does.

I’ve never liked these games. I remember the game being popular on the ps1 but never understood the reason.

Glad for those who do enjoy this.

Been a while since I played the first one but I feel this is lacking the charm and gritty atmosphere of that game.

The game looks good, but the controls are far worse than about any game I've tried since the PS2 era.

Bottles seem to have a set throwing distance that I still haven't figured out if I can change it. Right now I can literally not get past a wall because my bottles hit the wall instead of the fire, and I can't back away any further.

I really think this game could be great. But unless they make it more user friendly I won't be playing it again.

You know you can aim with the right stick, right?

I tried several times, didn't do a thing. I have literally tried every button. I'll try again later tonight.

You can aim the water with the right thumb stick but it's so poorly done I still can't throw the water where I want half the time.

Maybe I wasn't paying attention, idk. But so far regardless of how clunky the throwing is, the game still has more annoyances than positives for me. I'll wait another month and see.

Same, the controls made me quit the game. The game itself looks beautiful and great but the controls are from another time, maybe it is not a game for me

This is exactly why I stopped playing it too. I made it like 15-20 mins into the game? Finished the extremely long opening cutscene, and didn’t even make it to the end of the first level before I turned it off. I really tried giving it a shot, but there’s something about the controls and jumping that felt inconsistent and unrefined. I kept dying with each new obstacle presented to me, and 9/10 it was due to the jumping/climbing onto ledges aspect being wonky.

Tried the previous game on the PS4 and obsoletely hated it. I never really connected with the main character and the whole platforming and releasing prisoners got repetitive very quickly.

Im liking the game, but cant understand how it doesnt run with 4k/60fps...thr graphics arent that good...

It’s made with a super small budget/team, I think that’s why

Yeah they’re very dated especially considering each area is almost a static set piece. They could have added so much more detail.

I was playing the level where you have to heal the workers and after they patched it, it looked like the resolution was reduced to improve framerate which was worse before the patch.

There are a lot of railings in that area and they looked noticeably jaggy when I started playing after the patch.

to many bugs. i had to put it down after my third time hitting a game breaking bug that forced me to restart a level