Anyone else catch that Microcenter increased their price on 5600X chips to $349? They had been $299 for some time now, even dipped down to $279 briefly a few weeks back.

Anyone have any ideas on this price increase? They still have 5800x chips for $429 so the price disparity is tiny now between the two... maybe they're just testing the waters for the weekend and will drop the price. I hope so as I was planning on trying to buy a couple for the kids in a few weeks.... 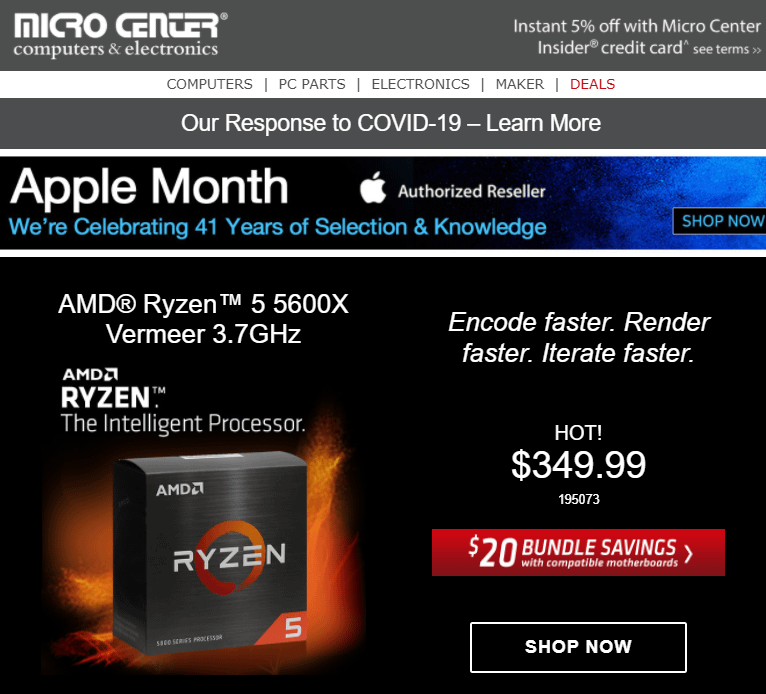 Whatever Intel did, it seems to be working.

5800X? has been as MSRP in several EU countries, check another EU amazon (it/f

It is at that price, cheapest you can find in the country right now.

The 11400/10400 have lots of security vulnerabilities and are uncivilized power hogs.

Mind sharing sources for your bold claims? Or are you a mindless fanboy trolling..? Most people here are fans of deals not companies, please stop being cringe, companies don't love you back

opposite of the truth

Zen 3 processors also have a security flaw in relation in their "sandboxing" process utilizing Predictive Store Forwarding (PSF). Other numerous vulnerabilities had been reported in their Security page on AMD. Some of them involve side channel attacks from info given by RAM and Ryzen Master driver vulnerabilities.

You can disable PSF for AMD Ryzen or disable Spectre mitigation processes on Rocket Lake. Both of these mitigation procedures only consume a small overhead in relation to their performance.

Every single CPU would have their security flaws; in consumer-setting, this would be less of an issue (who the hell would bother to install a BIOS malware to someone that holds only a thousands dollars at best, unless he/she is a bone fide millionaire). It also helps the fact that Intel-based server are currently the leading market share. Why the hell the hackers would develop a backdoor for less used CPUs? There is more data and/or money to be stolen in developing exploits for CPUs that has a larger market share.

To say that AMD is completely and utterly unbreakable is nonsense, as much as Intel as being filled with holes and would expose you to all attacks left and right.

"Uncivilized power hogs" may have some truth to that in comparison to Ryzen CPUs. While 11400F with power limits do operate at 65 W, they tend to absorb a lot more power to compete with the Ryzen CPUs. It is the limitation of the current architecture utilized by Intel CPUs.

Clock boosting of Intel is "dumb" (simple) in comparison to boosting of Ryzen. That is not necessarily a bad thing. The only value proposition that Ryzen processors have is that some of their SKUs came with decent cooler. Intel's stock box cooler is useless to say the least...

Because they have that distinction as "performance king." Perhaps the same thing as Intel during their position in the past; as the performance leaders, they are free to charge whatever they please. The chip is pointless from value perspective, but the reality is someone is still buying them regardless on how small the margin of performance was.

They technically did that... It's called the Ryzen 3600 XT and we all know how great their value proposition are. It's really their problem to take care honestly. They will consider to change their pricing if the Ryzen 3600 or Zen 2 CPUs sell like hot cakes (which is highly possible IMHO).

Intel taking the budget position in the market is the right thing. Someone that doesn't do productivity workload and do have high-end GPU (that I'd figure would play at higher resolution and remove a significant portion of CPU bottleneck anyways) would try to save money and opt for Intel 11400F/10400F instead.

I noticed the 3200G price increase as well but I chalked that up to the whole GPU insanity (supply and demand and what not). The fact that they were in stock at all was kind of a surprise.

I'm seeing a lot of online retailers have the 3200g and especially the 3000g as coming soon (april 10th). If microcenter manages to restock the rx 550s before they totally sell out I'd see that as a really positive sign about availability.

They are plentiful. They are charging what they can I guess.

Intel did shit the bed by nearly matching and not beating 5k series. Best is best if you remember 9900k pricing.

Intel is actually extremely competitive at the 6 core CPU level.

If you want a cheaper 5600x the i5-11500 is nearly half the price and performs basically the same while having an iGPU inside it good enough for basic gaming too as a bonus.

As you said, AMD are charging what they can. I don't see why anyone at all would pay so much more for a 5600x over an i5-11500. In a normal market, AMD would have been forced to release a standard 5600 by now to compete with Intel.

Because you already have an AM4 board. That's hurting Intel badly at this point, in that AMD gets to price against a board and chip with their chip alone. Its the long payoff.

I'm still waiting for the 5800 without X, since I could still air cool it. Don't think I will see this quarter at retail. AMD has no issues selling the high end, they don't really need the low end revenue wise. The 3300X would have been a top seller, but most people gave up and bought a 10400F instead.

I understand that they have to milk the golden cow so to speak, but I'm also sure that they would produce more low end cpus if TSMC would give them capacity. Everybody and their dogs dog is ordering chips.

I don't think intel shit the bed. It performed about as well as could be expected with that architecture. I'm not sure what you were expecting from Intel. However, it will probably be a bit before they have any kind of "ryzen killer". The new CEO seems to be getting their fabs in order but that will still take time as well.

Plus from the benchmarks, I saw they did seem to perform better than the prior intel parts.

The ryzen parts do perfrom better but if you just sat someone down and told them to start playing I doubt they could tell a difference between the ryzen and intel machine assuming every other part was a close as possible.

Yeah you literally can't tell a difference in a double-blind test between anything 6 core and up in games.

Microcenter sells cpus at a loss to get more foot traffic. Microcenter is buying the cpus for more so they have to sell them for more

Stimulus inflation being felt. I picked a 5600x up yesterday for $299 at my Microcenter but only because they forgot to take the sign down so they matched it.

You guys realise there’s a whole worldwide economy out there right? Beyond gaming?

There’s no need to speculate. They’re adjusting pricing for multi-faceted reasons. Inflation and higher costs from producer are two among many of them.

Yep, raw material cost has gone up hugely in the last 6 months

I stop talking to oem representatives about supply. The guy coming by looks beat down like a mma fighter in the last round. They order like 200 workstations for industrial workloads and he counters with "30, maybe, June?".

Are you telling me, for the first time in god knows how many years, PC parts (this particular CPU) are cheaper in EU than in the US?
Currently the 5600X goes over the counter for 339€!
What the hell is going on.

Not sure but a few days ago there was a shelf full of the actual 5000 series processors like 2 hours before closing. Stock is def catching up fast.

At mine anything below the R9s have been in stock for close to a month now.

Just get the 3600x. Same core, same threads. Its zen 2 instead of 3, though. A slight difference but the 3600x is only $228 on Amazon. Plus the core clock is only .1 ghz faster. And you only lose .2 ghz on the turbo boost. I doubt its much of a difference. And gaming FPS won't be a drastic change on most games. If the kids play Fortnite then the 3600x is better. If they play PUBG or CS:GO then the 5600x is marginally better.

Im not in the loop with all the nitty-gritty details but for me personally, I'd save my money for the more over-priced graphics cards. Its cutthroat with these prices. Spending $500 on what used to be a mediocre card 4 years ago vs what you should have been able to buy for $300 while being mid-end gaming card new, now.

I guess that website shows false data apparently. So ignore it lol. I was not aware of this.

I've detected a link to UserBenchmark. UserBenchmark is a terrible source for benchmarks, as they're not representative of actual performance. The organization that runs it also lies and accuses critics of being "anonymous call center shills". Read more here. This comment has NOT been removed - this is just a notice.

I am a bot, and this action was performed automatically. Please contact the moderators of this subreddit if you have any questions or concerns.

They like to raise prices briefly and then resume the normal price and tell people it is a price drop. They have been claiming their 3600 for $200 is a $50 savings for months now, even though that is the msrp. Microcenter is a scummy business just like everyone else.

Microcenter is a scummy business

They sell CPU's as a loss leader to get people into the store. Everything else has a mild markup, but they are ultimately a business and have to pay rent and payroll.

i think this means the non X 5600 variant isnt too far off.

They are a business and need to make money. They are offsetting the money they are losing on the 5800X by increasing the price on the 5600X. Micro Center has a much smaller profit margin than places like Newegg, etc as they have a MUCH higher overhead. This type of change, along with the replacements plans they sell, is quite literally how they stay in business. If everybody stopped buying replacement plans MC would shut its doors pretty fast.

I used to work for them and what I saw was that MC sells CPU's (intel, right now, at least) at a loss to get foot traffic on items that actually have decent margins (cables etc). What we paid for cpu SKU was often higher than the sale price. We also had a much more reliable supplier for Intel SKU's than AMD SKU's so the AMD supplier they have might be adding a markup of their own.