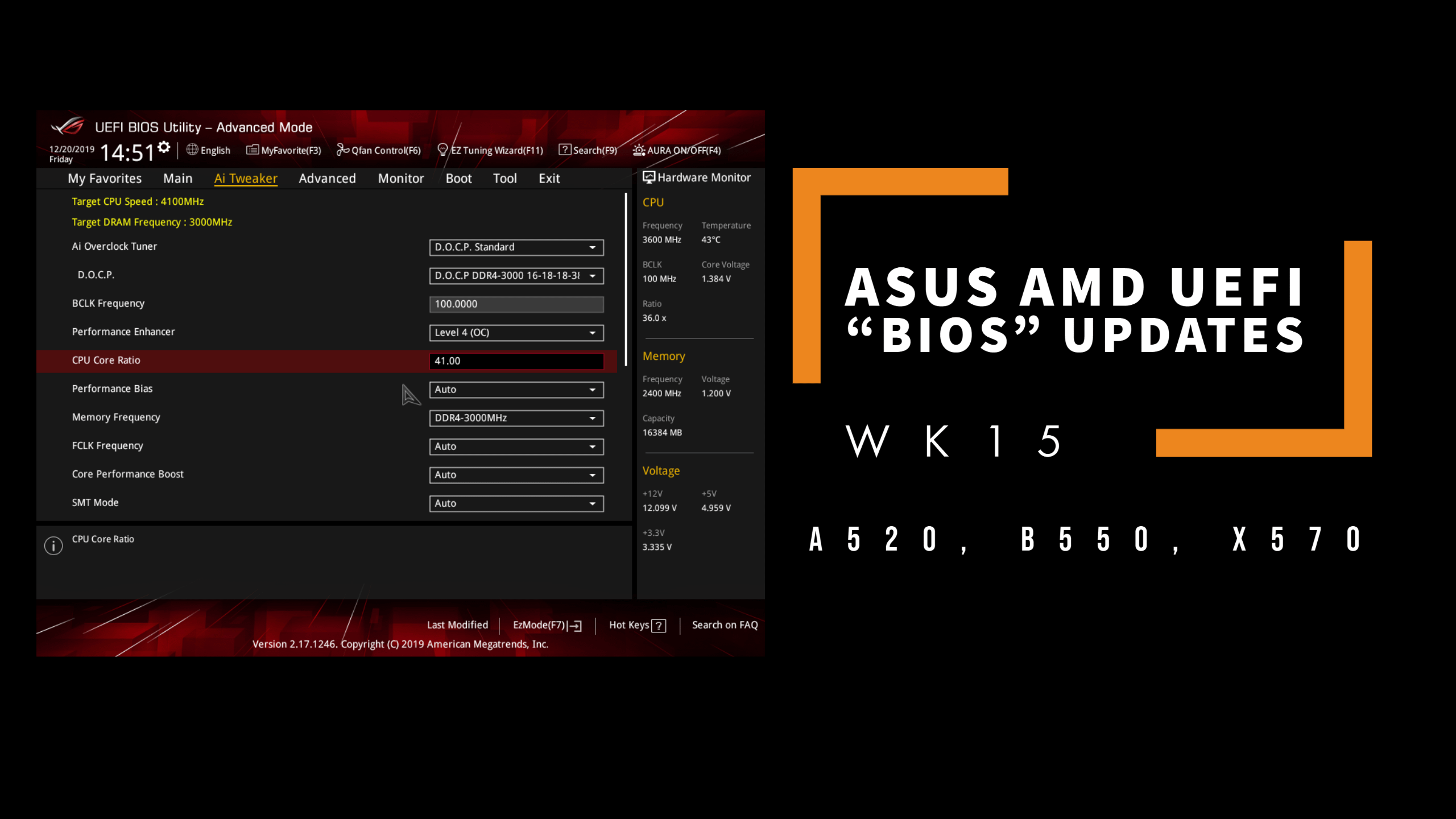 *Please do not ask about motherboards not listed. This is detailed in the post information/FAQ below -

*For applicable boards, the UEFI update include the latest AEGSA 1.2.0.2

This update is focused on providing improvements to USB interoperability, compatibility, and overall USB functionality.

W15 is in relation to the workweek, these updates were released between the April 9th – April 16th

Why is my motherboard not listed?

https://www.asus.com/us/support/
and checking if it has been updated recently. I post updates on a weekly basis. UEFI’s are released in waves, because of this it can take an entire series weeks or months to see the “same” update if it includes items like CPU firmware. Furthermore, keep in mind that not all updates are applicable to all models. Due to inherent design differences as well as specification and feature variation an update may only be applicable to a specific model.

How can I be notified about releases?

If you want to be kept in the loop, you can also follow me for notifications when updates are released/posted. I am also the admin for our PCDIY Facebook Group where I post updates and other ASUS centric product news

How long after a board is produced will UEFI updates be released?

Keep in mind that generally after a year a motherboard reaches a certain maturity level and as such will see fewer updates. If you feel you have an issue that is dependent on a UEFI release, please submit a support ticket. In some cases, some boards can see updates for more than 24 months+

I want to update but am not sure how to update the UEFI "BIOS"?

If you want guidance on how to flash/update your UEFI BIOS please watch the video linked below.

Should I update the UEFI if my system is stable and running without issue?

If your system is running without issue, especially if overclocked in any way ( including DRAM ) it is advised you stay on the build/release you are on. Changes to underlying auto rules and other operating parameters can change the OC experience and require you to retune a previously stable OC value. This does not mean the UEFI is not a functioning release but that changes in the underlying code base need to be accounted for when tuning a system. As many of these values are in low level or specific operating parameters it is best to retune from full UEFI defaults after you have re-run stability test at UEFI defaults.

What if the UEFI BIOS listed is a BETA? Should I update?

BETA UEFI releases are for enthusiasts who want access to the latest features, functions, and microcode enhancements, and overall UEFI improvements. As they are not officially supported, they are not recommended for day-to-day / long-term use. Users who plan to use their system in this capacity and want to ensure the best interoperability/compatibility and stability, as well as performance, should wait for a formal release.

Will a UEFI "BIOS" update improve the performance of my system?

A UEFI update can include CPU microcode as well as other performance tuning adjustment enhancements for the UEFI that can influence/increase performance. With this noted it is generally minimal. As always performance analysis/comparisons should be done at stock-to-stock values. This means loading F5 on both releases and comparing your application/benchmark scores. OC-related comparisons may require retuning prior to testing as changes to underlying auto rules can invalidate prior scores even if with similar settings.

Not every user should update/flash their UEFI BIOS. I stress this again, if you are running without issue(s) you are advised to stay on the release you are running.

When flashing please perform the update process at full UEFI defaults. Do NOT flash with an overclocked system/profile.*

1.I recommend updating the UEFI BIOS on your motherboard for new PC builds. This helps to ensure the best interoperability, compatibility, and performance. If you are building a PC and have not yet installed the OS, I would recommend you update the UEFI.

2.Keep in mind flashing/updating the UEFI will reset all defined parameters/settings and operating profiles. You will not be able to restore defined values by using a UEFI Profile as profiles are not interoperable between builds. It is advised you note or screenshot (F12) your values prior to flashing if they are complex. Upon completing a flash, I would recommend you load UEFI defaults after the fact and complete a full reboot and shutdown prior to re-entering your prior values. Keep in mind you may need to retune these values under a new UEFI.

3.When you update the UEFI and re-load UEFI defaults depending on your originally defined CSM/UEFI device parameters you may experience BOOT issues. Depending on prior settings you may need to enable or disable CSM to restore BOOT functionality.

4.Be advised that in some cases a rollback to a prior UEFI is not possible. This generally is the case when there is an update that includes CPU microcode (such as an AMD AEGSA or Intel ME). This means you may not be able to “flashback” to a prior release.

5.While not always necessary some UEFI updates may require a clearing of the CMOS. You can either clear the CMOS via the CLR CMOS button if your motherboard has this feature/function or you can also CLR CMOS by removing the onboard CMOS battery for at least a few minutes. You can also attempt to locate the CLR CMOS jumper on the motherboard and short the pins.

6.In some cases, you may not be able to jump from an older UEFI release to a much newer release. You may need to "step" update, this will mean upgrading incrementally to a slightly newer build first prior to going to the most recent build/release. In most situations this not required.

I also recommend you backup your system prior to any flash/update and always advise flash/update become executed from a fresh loading (F5) of UEFI defaults.

The board model/name is on the right-hand side and the version number is on the left-hand side. To download the UEFI BIOS please go to

Been completely stable and no slower than any previous bios. Can't say anything about USB issues because I have never experienced them with any bios on my board.

Eagerly awaiting the non beta version, though I can't find any issues with the beta.

Keep up the good work ASUS!

Thanks for the feedback and appreciate you being part of #TeamPRIME

Have the same MB, with 5800x i ve tried all the bioses came out since 5000 series and never had a problem. I havent tried this one yet, did you notice any differences, temp and performance wise

No differences. Did benchmarks before and after. All within the margin of error. 145 watt PPT, stays around 83-85 under prime95 small fft, custom loop with a 240 and a 360 rad, loop also contains my 3080 FE with bitspower block.

I have MSI B550 Gaming Carbon Wifi with AGESA 1.2.0.2 and i'm also having USB disconnects, it's better than before, but definitely not fixed.

After half year and still not fixed, i guess i will just need to learn to live with it...

Any idea when there will be a fix for USB dropout on ASUS B550 ITX ROG?

What kind of problems do you have? I notice on my board when I have my two external hard drives connected, my mouse seems to stutter around. Will try this BIOS and find out and pray.

Updated my Strix B550-E board, good to go! The previous beta bios had fixed USB disconnects, but introduced an issue with my rear USB C port. On this latest BIOS, the USB C port is back working and so far so good with no USB disconnects.

"I am once again asking for your support of the x370 Crosshair VI Hero".

Please help us out with a SAM/Re-Sizeable bar enabled bios and updated AEGSA. Sadly instead of supporting this board further the latest bios made it harder to flash.

These boards are better than many recent ones yet have been left out in the cold for support.

You're asking the wrong people. The only way the C6H is getting new AGESA is if AMD release a new version on the ComboAM4 branch. ComboAM4v2 isn't going to happen.

The ball is in AMD's court, not Asus's.

Asrock released x370 versions with support for it though :). Hell people have been flashing that version onto their C6Hs.

As most UEFIs are mature if you have instability it is most likely due to your settings or margin in the silicon quality. You should go back and perform a sync scaling in your OC pursuits and user smaller intervals.

Just tried to install 3801 beta on my TUF GAMING X570-PLUS (WI-FI) via EZ Flash 3 in the BIOS but it refused the file, saying it was not valid.

Are these considered beta bios? I noticed that the x570 strix E gaming has this bios 3801 available as well, so really do check if your board is not on the list! You may have it!

The previous BIOS with AGESA 1.2.0.1A also includes the USB fix and is not a beta.

The final 1.2.0.1A version has the same date as the beta 1.2.0.2 version, which makes it seem like they simply finalized the former because they were releasing the latter. It makes me wonder if we won't get a final 1.2.0.2 version until a beta for the next version (ex. 1.2.0.3) is also available. I hope not, since that could be a while.