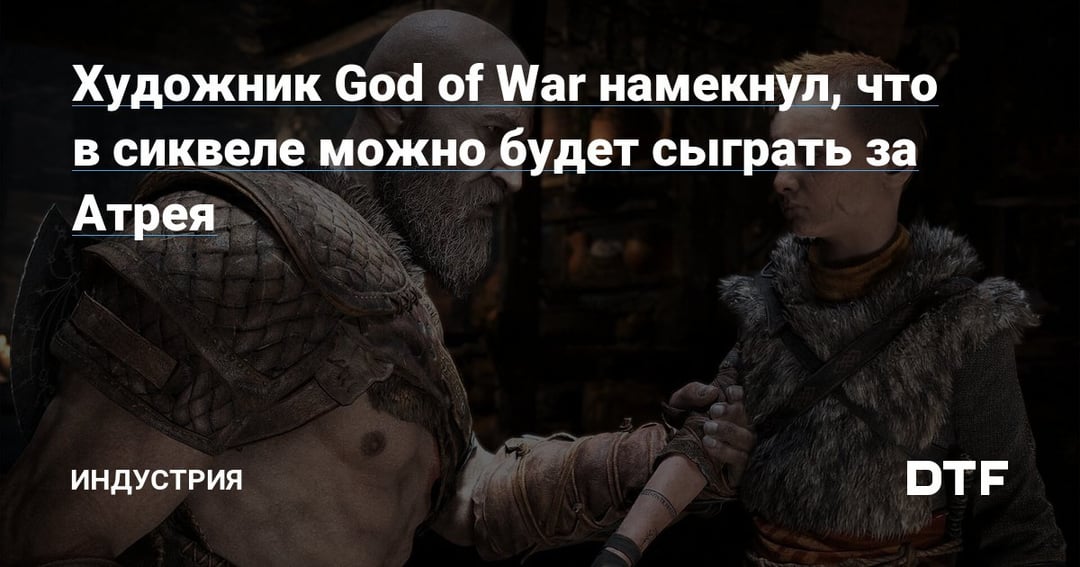 Am I alone in somewhat expecting this anyway?

I expect him to be the full on main character of GOW 3 as well. If I remember correctly Atrues even mentioned at the end when looking at the paintings.

Atrues: "Look it's our story"

Yeah exactly the clue I was thinking of

A specific reveal towards the end of GoW, gave me the impression that he's gonna end up either an antihero or an antagonist, and I think it's gonna be the latter.

Atreus kills Kratos in GoW 3. Then we get 2 pre-quels of Kratos's journey from Greece to Scandinavia.

Nah, santa monica said that kratos will always be the main character of gow

Yup I expected it too.

I expected this in the first game, honestly. Kinda like they did in TLOU. I guess the issue was that Atreus wouldn't play exactly like Kratos

Nah, I was always expecting the next GoW to have us play as Atreus for at least a few missions.

Considering the end of GOW had what looked like a dead Kratos with Atreus kneeling with him, yeah I've been expecting this.

Kratos is bound to die at the start

Yep. Then Atreus heads to Seattle to exact revenge.

Guess nobody else watched the video? Because the conversation is incomplete but also sounds hypothetical. There's no "suggestion" here. This article is nothing.

Kratos has died like 3 or 4 times, the underworld is a holiday home for him. But if there's one person that deserves to rest it's him

God of War 2 is HILARIOUS, gets sents to hell - crawls out of it like nothing almost immediately.

“In a short Instagram video, Matthews revealed how The Last of Us had a big impact on God of War 2018. He also said Santa Monica studio is looking for more inspiration in The Last of Us 2 when it comes to the God of War sequel.”

… i got clickbaited so you didnt have to

Who could’ve ever thought that The Last of Us inspired GoW 2018, truly mind blowing /s

You probably should have been after finishing God of War PS4? There was a mural, IIRC, depicting what looked like Atreus killing Kratos.

There could be more to it, or a twist that the frost giants didn't understand when they made it, but it at least seems like that might be the route we see taken in God of War Ragnarok.

I don’t mind if Kratos inevitably bites it at some point, and I wouldn’t think they’d straight up copy a revenge storyline like LoU 2. Still, for Kratos to die in the early game would be pathetic. There’s still a lot of potential for his character to grow and evolve, especially as Atreus grows up.

There are no golf clubs in that universe, he should be fine.

I trust santa monica, although reading this I am against it, they can make some really badass gameplay, but a big part of me is still goin “I wanna play as kratos mayn”

It might be like witcher 3 where you play the 2nd character very rarely and for story stuff. Which was super fun because in the witcher ciri was kind of OP

Dude Ciri was so OP lol but yeah I enjoyed how they introduced her a a playable character. Never overstayed her welcome either. Unlike alot of Spider-Man MJ stealth missions.

Or it could be like Arkham Knight where at times you can freely switch between characters mid fights, to make them look like a dynamic duo.

Exactly where Gears of War and Halo went wrong. You cared about Marcus Fenix and MC I didn’t give a shit about any character in Gears 4 or when Halo decided to not make it about MC.

It works well if you've given the MC closure, but you also have to go above and beyond in making the new MC good. Take the Yakuza series. They gave Kiryu an entire game for the wrapup for his story and then remade all the other games he was in.

Then they spent more than half of Yakuza 7 making us fall in love with Ichiban before any plot even seriously started.

Halo on the otherhand just dropped Chief for a new character in the middle of a massive cliffhanger on his story arc, and didn't even bother to make the new protagonist remotely likeable or interesting.

Similar case with gears of War, but not as bad. Marcus at least got to finish his arc but the new girl is one of the most half ass'd attempt at a new protagonist I've ever seen.

Yeah especially with established franchises, I’m pretty sure we are still playing as Kratos though, they love him more than us.

This sentiment doesn't gel with me. This is like the people that gave up on Game of Thrones in Season One because of a certain death, but then missed out on other characters becoming more fleshed out and interesting than that death ever was. Things have to move forward, I get why Batman is almost always Bruce Wayne. But itd be nice to pass the mantle at some point too.

He will come back from hell again. It’s Kratos

Kratos has died like 4 times. I have absolutely no faith anything can kill him at this point, much less Atreus.

Yah, but considering how serious the storytelling has become in GOW 2018, I doubt he will come back once again....I hope he do though, because he is my favorite Video game character of all time.

Archery, daggers, and magic plus animal morphing is what I see for atreus. Would be fucking sick.

The archery concerns me a bit. Could start to feel like Horizon/TLOU/Ghost but then again I have a lot of trust in Santa Monica.

I’m calling it. Kratos dies at some point and you take control of an older Atreus, maybe teenager, full of rage and wanting revenge. I am aware this is somewhat like the story of another popular PS franchise title… but still would be fun!

Sony Santa Monica concept artist Samuel Matthews recently suggested that he would probably take over as reins of Atreus, more or less as it did when we took on the role of Ellie in The Last of Us Part II.

In a brief Instagram video, Matthews shared how The Last of Us made a big impact in God of War 2018. He also said that Santa Monica is looking for more inspiration in The Last of Us 2 following God of War.

Sounds like a terrible idea. I don’t mind playing as Atreus for some of the game, but to get rid of Kratos like that, especially if it’s in the early game would suck.

Taking inspiration is different form having the story be beat-by-beat the same as the other.

GoW was inspired by TLoU 1, did the GoW game also had the same story layout as TLoU? No bro.

wasn't this expected? I expect a couple years has passed in the game and also at some point we'll take control of Atreus

As a fan of the series since the PS2, I would find it.. "unpleasant" if it turned out to be true.

This really doesn't say much about Kratos' involvement. GoW took inspiration from LoU. Doesn't mean it's gonna copy the story