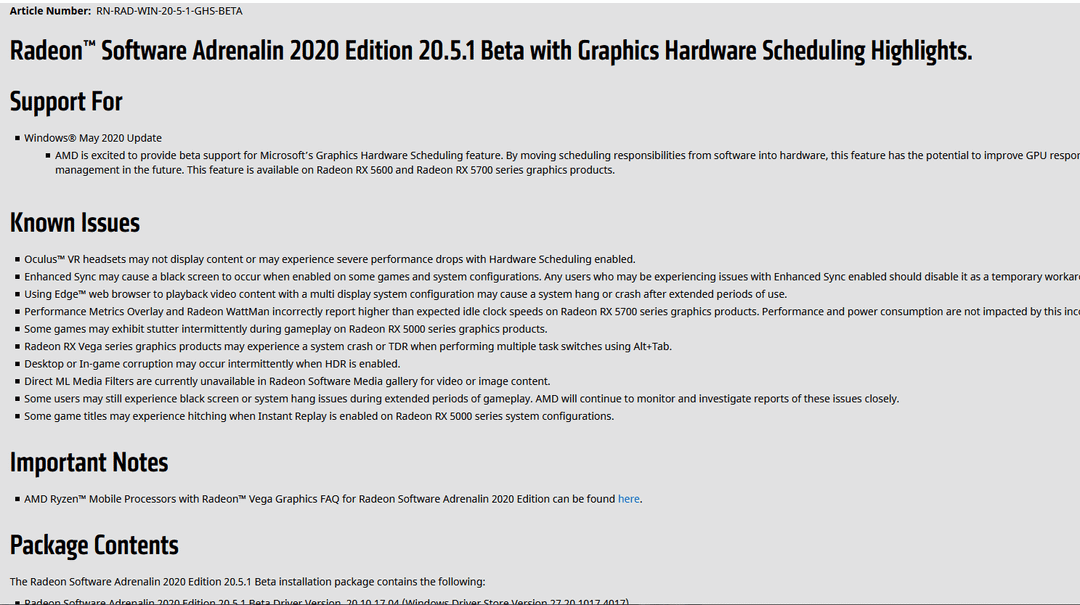 i was actually trying to make it sound more dramatic

Beat me too it.

Here is a link to download them. They also support WDDM 3.0.

You can also get the software directly from Microsoft Store.

I have the version 30.0.13000.22008 driver installed through Windows Update on the latest Windows 11 build (used with a 5700XT). The driver itself may support hardware accelerated GPU scheduling but it doesn't show up in the Windows settings under Display/Graphics and GPU-Z shows it as off, even if the registry value for it is set manually. 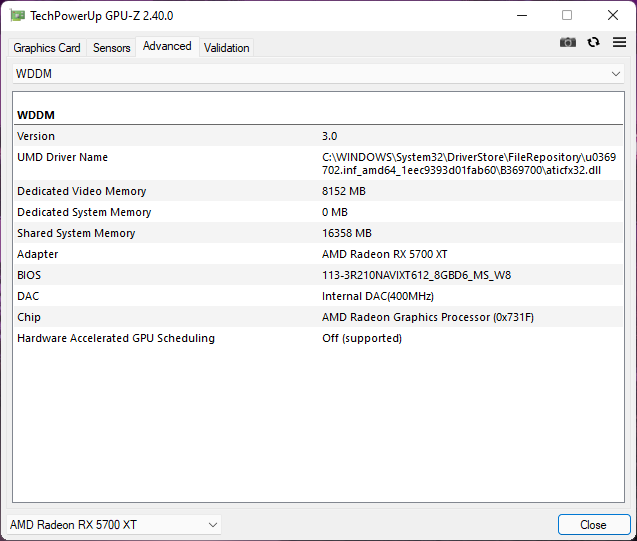 works for me on win10

What are uwp drivers?

Universal Windows Platform. It's the version of the drivers you can get through the Microsoft Store.

Nvidia GPUs since the 900 series are lacking a hardware scheduler though, so I don’t think it would have done anything no matter what…

This is different feature. Hardware Accelerated GPU Scheduling and Hardware Scheduler for the GPU are not the same.

did you read an article saying this scheduling method actually made anything better?

last time i tried it out it didnt do much of anything for games.

Not sure what its like on AMD, but on Nvidia its pretty hit or miss. It either does nothing real (maybe can measure if you spend all day comparing benchmarks) or your game crashes now. Inconsistent about it, too.

Or in the case of batman Arkham Knight causes the game to have horrific stuttering.

The thing that bothers me . .is that people have this impression that it was ever intended for games .. its not.

AMD already uses hardware scheduling and thus this did nothing for them, nVidia does or at the time didn't and so it does fix multi display issues or any other issues where the GPU is forced by windows to run Vram clocks lower than is required by a multi display setup.

Eg windows forces Vram clocks to the lowest required by the slowest refresh rate panel so on 60hz/144hz setups the 144hz panel would cause crazy amounts of stuttering on the 60hz panel and vise a versa, the cause .. the windows scheduler for the GPU was forcing the Vram to a clock speed to support only the 60hz panel. This of course caused issues when the 144hz panel was used for an application not in fullscreen exclusive and tried to change the Vram clocks.

HW GPU scheduling solves this problem by allowing the GPU to set its own Vram and core clocks rather than having the WDDM do it.

I know im glossing over some details here but with out HW GPU scheduling turned on my multipanel setup is a stuttering mess, personally if I had known about the 60+144hz issues I would have bought two 144hz panels over a 60hz 4k and 144hz 1440p.

The 4k is pretty much a pointless panel ..its not even good at movies and its HDR is .. fucking horrible, waste of money, another 144hz panel would have been better.

Edit - so many people in this thread complaining it does nothing for games .. well duh, it wasn't for games.

I wonder how Linux drivers handle this kind of stuff. Obviously talking only about AMD and Intel here, Nvidia has its own non standard secret sauce.

It's not hardware scheduling, it's hardware memory management.

Out of curiosity what is your 4K panel you are so unhappy about?

if only you had a CX lg tv instead. not 144hz but the hdr is lovely

FYI the differeing monitor hz was a separate fix and not related to the hardware scheduling option. It was just in the patch that added the option to windows. But people had tested and found it fixed without hw scheduling enabled.

Microsoft themselves say that for now nothing changes, but the feature is important for how Windows will interact with the GPU in the future.

It also seems to lower the CPU overhead in games,which is always a good thing.

in some cards it gave a bit of a boost (even on my 5700xt). Being it good or not, the option should be there. They just released a beta driver more than a year ago and called it a day....not cool

I mean, if it was ready for prime time it would be out in a normal release.

This is a placebo effect, same can be said in the case of people trying to run SAM on anything earlier than RDNA2.

Probably better without it. Hardware accelerated GPU scheduling introduced micro-studders with both my 1080ti & RTX 3090. Doesn't seem to improve anything in a noticable way either.

AMD has a different scheduler compared to Nvidia. They already do a ton of scheduling on the HW side and if I remember Microsoft's feature, it basically is barely more than AMD does already.

Yet again a misconception about how scheduling works between AMD and Nvidia.

I don't want to explain it again. But the differences aren't anything to do with hardware scheduling.

Yeah I was super disappointed on my 3090 due to overzealous hype.

Yea clickbait YouTubers had a field day with it.

I use it on my 1080, no difference whatsoever

What do you feel you're missing out on?

What is this exactly ?

Its supose to reduce latency that is why it was added, it should've been added already however its in quite early stage, im sure the true benefits will come when we have direct storage

It didn't do anything

Yeah, what gives? I was wondering this myself for a while. Thanks for posting.

I was downvoted repeatedly for telling everyone last year that this feature wasn't really useful or exciting... Well, what did y'all learn after it was finally available?

The loon likes to say "I told ya so."

Not sure if it does much but I am surprised people are still using standard driver and not DCH . I very much doubt windows 11 will even support standard.

It doesn't do anything really, does it? I haven't ever seen anything to suggest the setting does anything worthwhile.

Right now, you're litteraly not missing out on anything. AMD or Nvidia.

Mmmm cpu usage is higher with nvidia, and the performance is lower if you have a cheap cpu so... i prefer to keep it this way xD

How did they break your display?

What display and how did they break it?

And? What's your point?

I don't get why people keep posting about it. At the moment it provides nearly no benefit, but does break some games. Why do you want AMD to release a broken feature that won't benefit you? How about waiting for things to work and have a point before releasing them? Seems like a great idea to me!