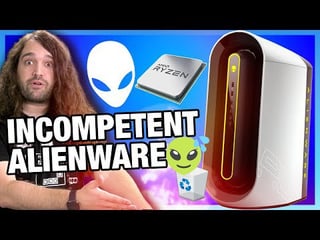 That stock cooler had me roaring… holy shit that’s bad

The funniest thing is that it's not even stock hahaha

It's an Intel cooler with a hockey puck glued onto it so it can reach all the way down to the surface of the Ryzen. Youch, that's hot. Might as well glue a stack of dimes to it at this point.

Dell is the best friend money can buy

Intel also gets shafted as well:

For that +$2000 system, Dell decided it was appropriate to use a single 92mm case fan to cool both the 9900K and GTX 1080 Ti. The GPU uses a blower cooler, and the RTX 2080 Ti with the same cooler design is known to shut down at 80C core temp while running a benchmark (probably from VRAM or VRM overheating).

But hey, how else are you going to use a 460W PSU without worrying it being overloaded when the computer thermally throttles or shuts down before it hits 460W usage?

ASUS has been caught doing the same thing on their AMD laptops. They choke off the airflow to gimp the performance.

To be fair I have an ASUS gaming laptop with an Intel CPU and the thing still throttles like crazy.

you know what's sad? if you look it up on their website 1600+ people gave this a 5 star. I don't know if these people live under a rock or something. that cooler is literally TRASH. should be criminal putting that on a r7 3800. Just sad. (correction R7 5800)

Because they don’t know any better. It’s really that simple. If you have little experience with custom PCs or even the boutique builders, then as far as you’re concerned, “gaming PC plays games, 5/5”. The average user isn’t going to realise that it’s thermal throttling, or that the noise is excessive compared to the competition, or that there’s a lazy, ancient, badly designed OEM steel chassis underneath the plastic. If it can run AAA games and it doesn’t literally catch fire, it will meet their expectations.

I talked a friend out of buying one of these a few weeks back. He’s actually decently tech savvy, he’s just short on time and not ‘into’ the hardware aspect so he’s not going to put in hours of research into DIY or even the best boutique build. And he probably would have been happy with the Alienware, because he wouldn’t have been aware of what a boutique build can be like for the same money.

I remember when Alienware's aesthetic was at least visually interesting and over the top. Now they're just like the rest of Dell's garbage with maybe 2 or 3 extra LEDs.

Yeah it looks like it’s literally a standard prebuilt steel box like an optiplex with an added plastic shell.

That’s because it is.

That's exactly what they've been for years. We have a 5 or 6 year old Alienware at work and underneath the plastic it's identical to our Dell workstation

Alienware's enclosures used to look OK. This new design with the strange curves is hideous and taking the cover off shows how much wasted space there is. It's hideous and very poorly designed when it comes to airflow.

XPS 720 was peak Dell case design imo. All down hill after that.

Well, it's not like technical people have been calling Alienware bullshit for years now.

The GPU was good as far as I recall. He did a video of that card earlier and it has surprisingly good build. But yeah, the whole pre-built is shit.

Alienware got stuck in the early 2000 for way too many years now, is time for them to disappear

Alienware got assimilated by Dell. Alienware used to be great, then they got bought by Dell who ran it with a hands off approach for a while. Now the outward aesthetics are the only thing remotely "Alienware" remaining.

I'm glad that reviews of this system exist. These companies that sling garbage as "premium" need to be held accountable for this literal e-waste. Fuck dell.

Dell is known for this. Why do people keep buying their crap is beyond me.

My company switched to HP devices since Dell basically told us to fuck off when we tried to negotiate a new contract. HP offered something like $300 off for desktops and laptops from Dell's pricing for the same specs and Dell said they wouldn't budge a single penny.

Dell continues to be hilariously bad

You wouldn’t even be able to play RTS games on an $1,800 computer holy shit.

No kidding, that's just embarrassing. It's single channel too... Ryzen performance on single channel memory must be abysmal in games given how much it scales with RAM speed.

Also why are these computers 40 pounds? My full tower chassis loaded up with every case fan slot filled, 3 drives, a 1080 Ti is under 30 pounds

At least for dell nz, the 2 r10 models available only have single channel ram as an option whereas the intel models all have dual channel. Looks like dell is gimping the ryzen models at intel's behest.

aliens: "this is why we don't visit earth."

I haven't watched yet, but what is the deal with pre-builts being such poor quality?

At the risk of showing my age, I remember the days when one could order a Dell, Gateway, or HP with pretty reasonable confidence. (Not perfect confidence, but reasonable.) I've still got some ten year old Dells that are chugging along like a dream.

When did the flip happen, and why? It seems like more people would buy pre-built systems if they still had the reputation they did when I was a kid.

Edit 2: Just got around to watching it, I'm less than a minute in, Jay Steve holds up the CPU cooler, which is the typical Intel [Common] quality puck, you know the one I'm talking about, the little one. Then Jay Steve says "This system has an R7 5800 CPU in it." Just to put that into perspective, cooling an R7 5800 CPU with an Intel puck heatsink is a little bit like cooling down a boiling olympic sized swimming pool by throwing no more than three ice cubes into it. It's running a full water-cooling loop with a 140mm radiator. Alienware, you used to be cool.

Edit 3: I'm a fucking idiot, I've known this for years, now you know it too.

Brands like dell cheap out everywhere they possibly can and end up being a rip off which is where a lot of prebuilts will come from and that ends up being a nice contribution to prebuilts being a rip off stigma. Dell also likes to rip you off by forcing warranties on you lol

Edit: Fixed, thank you for the heads up.

Alienwares and Dells are extremely over engineered and it really hurts their performance. These things cost money to develop and the end user has to pay for it. Ironically the customer is paying dell to ruin an otherwise perfectly fine computer.

My mother bought a Dell recently, she asked me to install an additional hard drive for her (super simple, right?) and I swear to God that every cable and connector in that case was proprietary, even the motherboard was a little bit confusing.

Ultimately I couldn't give my mom a new hard drive, I couldn't find a single power cable for it, no SATA, no MOLEX, just this weird two pin thing that looked like it could be used to charge a 12v battery.

It's not great when the end user would have to replace the power supply just to install a hard drive.

Slight correction, some things are over engineered, costing money, leaving no money to engineer the things that affect performance, like the motherboard, CPU cooler etc.

It also doesn't help that the things that are engineered are idiotic, like the PSU being right over the CPU cooler. And that marketing insists on such a restrictive "alien" design.

Anybody else remember RDRAM?

Completely disrespectful to the consumer should not only be reported but should be required to correct absolutely all errors for that money for free.

That explains why these have just been sitting at my Local Microcenter (on sale too). The ones at Microcenter have good specs on paper but then watching the video and seeing the teardown...

The most hilarious thing is that OEMs and SIs cheap out in the weirdest places. Why would you slap that joke of a cooler on the CPU, but include drive cages and build a weird case that consists of so many parts? Why even bother to use socketable stuff and not just solder everything on the mobo as needed? Their logic just escapes me.

Those cases are trash

That's so bad it makes me want to avoid Dell in general. If they're willing to make that bad of a product at the ~$1800 neighborhood, what else are they willing to skimp on elsewhere?

They've made a few decent monitors over their years. Their PCs have always been rather low-rent at high prices. The garbage that's meant to sit under an office desk with no discrete GPU, running Excel and Word all day, but being sold to consumers as "gaming PCs" really takes the cake.

Hilarious, Dell is actually quite good with their pricing and sales here in Australia compared to most of the competition, but you can expect pretty much every dell to have bad cooling.

My earliest memory of Alienware was that they sponsored a League of Legends tournament in season 1 or 2, the tournament was ran on Alienware laptops as a part of the promotion, they kept overheating and crashing just running LOL. It was quite sad considering the system requirements at the time.

It kills me that Dell wastes good silicon in these dumpster fires. That poor 5800/360ti could have gone to a good home. We should have a tech PETA that punishes companies for this behavior,