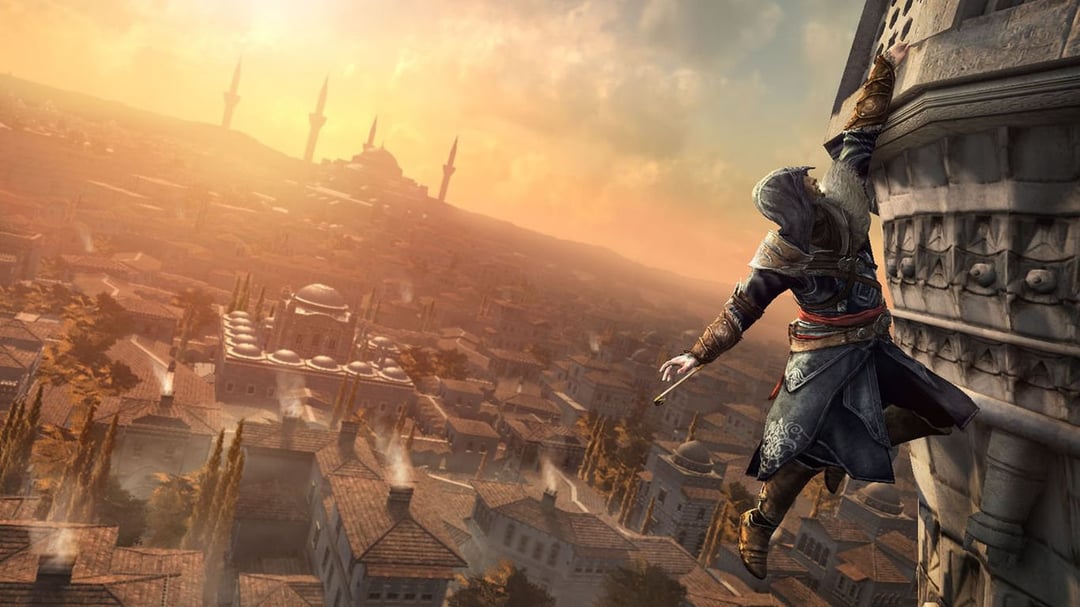 TL:DR they lost Raphael Lacoste, the art director for the series since the very beginning back in 2007.

Dude is an incredible artist. Been following him for a long time. Looking forward to what the future holds for him.

Assassins Creed hasn’t been the same in a long time. I know a lot of people like the new direction the series has taken, but I personally can’t be bothered to care anymore. The original Ezio trilogy was perfection. I don’t like the new RPG shit they’re doing.

What makes you think they added rpg elements to make combat engaging?

That’s the difference between Ubisoft and Suckerpunch.

For me its fun enough but i just dont really care for new ubisoft stuff anymore. It ticks the boxes for a successful solid game but they all just feel so, so much more soulless than many other games.

Ubisoft is using an exact formula of “do as little as possible to make as much money as possible where it’s not a TERRIBLE product but it’s also not very good whatsoever”. Even during the tougher times for Ubisoft around Watch Dogs release they were still a top 3 fav of mine but now they don’t even crack top 10. I have zero faith or loyalty to them whatsoever anymore. Everything they put out is worse and worse, and now they came out with that super contrived video about their f2p shooter… I already went through my “feels bad man” phase but damn.

I liked Origins because it was new and fresh but Odyssey and Valhalla are just more of the same with a bigger grind. Origins was my last AC game

Origins is definitely the best of this new rpg style AC. Odyssey was a fucking odyssey to say the least but I liked it for what it was. Valhalla, just no. Give us old AC Ubisoft....please

This is the truth. It went from assassin's creed to cultural warrior simulator rpg. Most MCs are more assassian adjacent than assassin and the main plot was reduced to email blurbs and the ending cutscene. Just give the OG fans a half decent ending and starta new series for this game in a completely different genre...

i loved the Ezio trilogy that was master class. Current RPG style is fun for me also but just doesn't seem too AC for me

The Ezio story was dope, I feel like his story had the deepest development. Now it’s all let’s obsess over the Isu Progenitors and godly super powers. What happened to putting a bad ass character in the middle of history and telling a boss tale? Valhalla was dope no lie but they could have done without making characters the reincarnation of gods.

but I personally can’t be bothered to care anymore

Syndicate and Unity were on the right track, they just needed to changed some things and they would have been perfect.

People complained so much about the 'Ubisoft formula' that they felt the need to change things up.

So now they went the RPG route, which is literally a cover for their transactions, which is worse then what they had before.

I feel like some of the main characters deserved another game or 2 to flesh them out. Not just a dlc which is nothing but mostly similar to main game

Ezio is still remembered and favoured primarily bcos we know his entire story from birth to adult to old to death. We formed a bond with him and see him develop and mature.

Characters like Connor,arno,shay could have had another game where they all met each other since they all were connected. But ubisoft just chose to throw them in the garbage.

Ubisoft is moving further away from good stories in their games and want to make them a grind fest Prime example is watch dogs legion. Its the most boring game I have ever played with no motivation for the player. Saving London is not exactly exciting when u play as a generic character. Aiden must have been boring in the first game but atleast the motivation to find his niece's killer was pushing me to finish the game.

It's funny since the blood lines dlc gained more positivity than the base game. It had actual characters like Aiden and wrench

I doubt Ubisoft is worried about this, all those departures and they keep outselling the previous game with the new one.

People come and go - its normal, but lets make an article about it so that we can all sit down and slate once again how bad AC series is.

On top of it, everyone is acting almost surprised that a dev who worked since 2007 left in 2021. Its honestly amusing to read it all

Valhalla was the best selling yet lmao

I feel like this could’ve situational, given that it was a launch title, and one of the last triple A games that has came out in the last year or so due to covid

Because there are more fans of generic rpg sandbox than an actual game a out assassination and conspiracy theories.

It's going live service, so yeah that'd be for the best

Live service is a positive. Not a negative.

Seriously, the series isn't even the same games anymore they needed to just drop the AC title and rebrand it. Seems like they are 100% done with the stealth gameplay. They are only interested in Micro transactions and making a huge game with boring quests weak stories, and just making you play for as long as possible.

drop the AC title and rebrand it

I mean, I agree... but... lol, they will never drop one of the most known and successful franchise names in gaming

What do you think Ubisoft has been doing all these years?

Sooner or later Ubisoft will end out of Ideas and we will end up with Assassin's Creed : John Wick .

Though not a bad thing I say.

Ubisoft already ran out of ideas years ago.

And nobody gasped in surprise.

Is that what infinity is supposed to be about? You get in the animus and go back to 2021 when Ubisoft was shit and destroy everything related to Assassins Creed?

What really killed it for me (pun not intended) was the kind of hack and slay approach they had with the last few releases. Somehow erased the beauty of it.

Killed it for you, but Valhalla is the most successful AC to date

Ubisoft is losing a lot of top talent with the garbage they've been pushing out lately. Color me surprised. Seems they could maybe benefit from changing up their management teams around a bit.

Def because their “new” direction.

They are probably bored with making the same game over and over again.

Assassin's Creed died years ago. It sucks because it was my favorite video game franchise ever. Now I hate seeing it