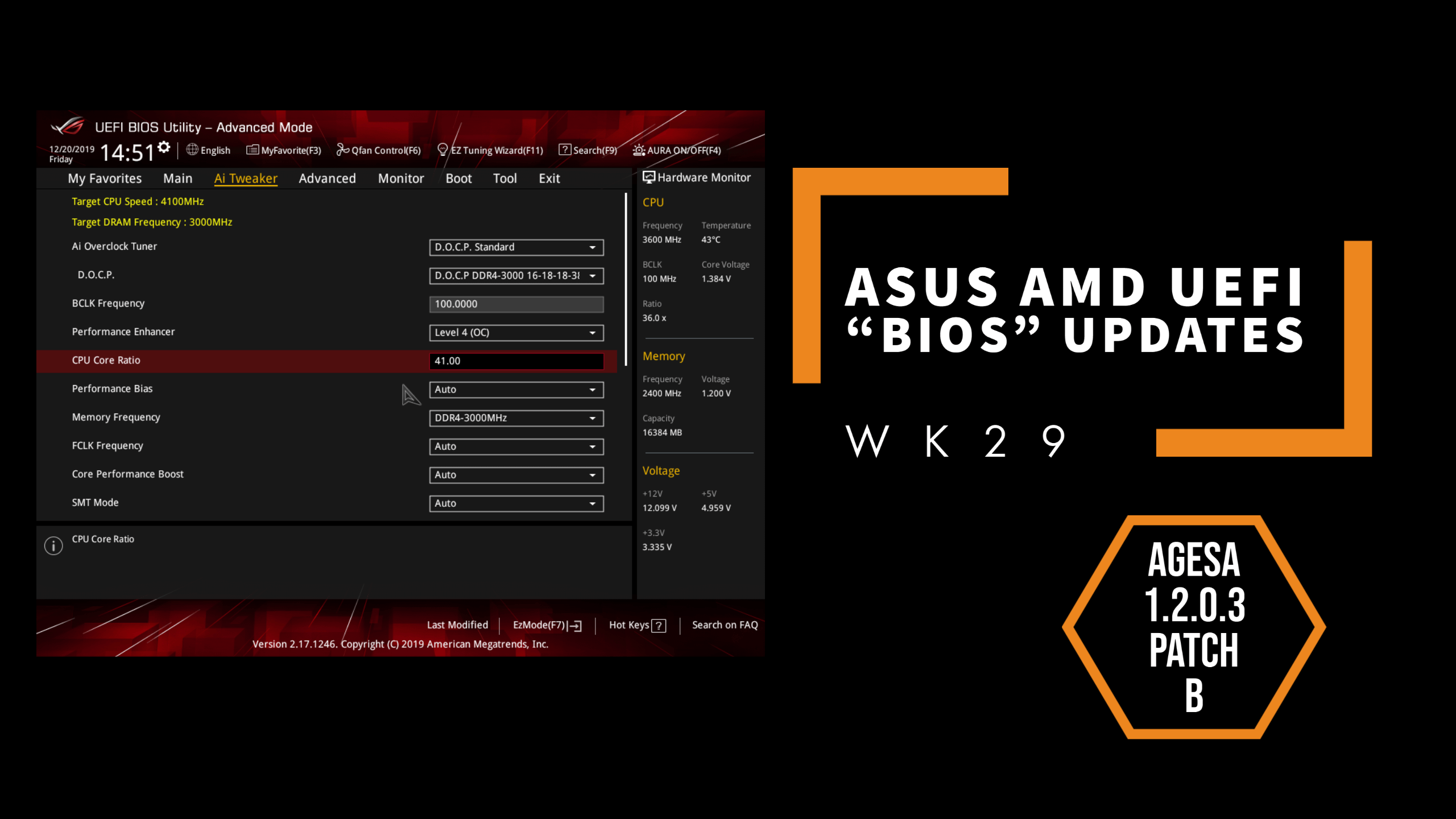 New UEFI BIOS updates For ASUS AMD motherboards – W29 *Please do not ask about motherboards not listed. Please review the FAQ below for details. AMD – B450,B550,X570,X399,V1605B *You will begin to see UEFI releases noting support for Windows 11, this is covered in our Windows 11 UEFI BIOS update announcement and makes change's to UEFI parameters to allow for interoperability/combability with Windows 11 boot requirements.
https://www.asus.com/us/support/
FAQ/1046215/" class="reddit-press-link" target="_blank" rel="noopener">
https://www.asus.com/us/support/
FAQ/1046215/
UEFI BIOS update list noted below – A total of 16 boards with a UEFI BIOS update. W26 is in relation to the workweek, these updates were released between the July 16th 25th – July 21st

Why is my motherboard not listed?

It may have been recently updated. Check

https://www.asus.com/us/support/
to see if it has been. I post updates on a weekly basis. UEFI’s are released in waves, because of this it can take an entire series weeks or months to see the “same” update. Furthermore, keep in mind that not all updates are applicable to all models. Due to inherent design differences as well as specification and feature variation an update may only be applicable to a specific model.
How can I be notified about UEFI updates when they are released?

If you want to be kept in the loop, you can also follow me for notifications when updates are released/posted. I am also the admin for our PCDIY Facebook Group where I post updates and other ASUS centric product news

https://www.facebook.com/groups/ASUSPCDIY
How long after a board is produced will UEFI updates be released?

Keep in mind that generally after a year a motherboard reaches a certain maturity level and as such will see fewer updates. If you feel you have an issue that is dependent on a UEFI release, please submit a support ticket. In some cases, some boards can see updates for more than 24 months+
I want to update but am not sure how to update the UEFI "BIOS"?

If you want guidance on how to flash/update your UEFI BIOS please watch the video linked below.
Should I update the UEFI if my system is stable and running without issue?

If your system is running without issue, especially if overclocked in any way ( including DRAM ) it is advised you stay on the build/release you are on. Changes to underlying auto rules and other operating parameters can change the OC experience and require you to retune a previously stable OC value. This does not mean the UEFI is not a functioning release but that changes in the underlying code base need to be accounted for when tuning a system. As many of these values are in low level or specific operating parameters it is best to retune from full UEFI defaults after you have re-run stability test at UEFI defaults.
What if the UEFI BIOS listed is a BETA? Should I update?

BETA UEFI releases are for enthusiasts who want access to the latest features, functions, and microcode enhancements, and overall UEFI improvements. As they are not officially supported, they are not recommended for day-to-day / long-term use. Users who plan to use their system in this capacity and want to ensure the best interoperability/compatibility and stability, as well as performance, should wait for a formal release.
How long does it take for a formal release to be issues (between BETA and formal)?

A UEFI update can include CPU microcode as well as other performance tuning enhancements that can influence/increase performance. With this noted it is generally minimal. As always performance analysis/comparisons should be done at stock-to-stock values. This means loading F5 on both releases and comparing your application/benchmark scores. OC-related comparisons may require retuning prior to testing as changes to underlying auto rules can invalidate prior scores even if with similar settings.
Not every user should update/flash their UEFI BIOS. I stress this again, if you are running without issue(s) you are advised to stay on the release you are running. Notes to consider -* When flashing please perform the update process at full UEFI defaults. Do NOT flash with an overclocked system/profile.
1.I recommend updating the UEFI BIOS on your motherboard for new PC builds. This helps to ensure the best interoperability, compatibility, and performance. If you are building a PC and have not yet installed the OS, I would recommend you update the UEFI.

2.Keep in mind flashing/updating the UEFI will reset all defined parameters/settings and operating profiles. You will not be able to restore defined values by using a UEFI Profile as profiles are not interoperable between builds. It is advised you note or screenshot (F12) your values prior to flashing if they are complex. Upon completing a flash, I would recommend you load UEFI defaults after the fact and complete a full reboot and shutdown prior to re-entering your prior values. Keep in mind you may need to retune these values under a new UEFI.

3.When you update the UEFI and re-load UEFI defaults depending on your originally defined CSM/UEFI device parameters you may experience BOOT issues. Depending on prior settings you may need to enable or disable CSM to restore BOOT functionality.

4.Be advised that in some cases a rollback to a prior UEFI is not possible. This generally is the case when there is an update that includes CPU microcode (such as an AMD AEGSA or Intel ME). This means you may not be able to “flashback” to a prior release.

5.While not always necessary some UEFI updates may require a clearing of the CMOS. You can either clear the CMOS via the CLR CMOS button if your motherboard has this feature/function or you can also CLR CMOS by removing the onboard CMOS battery for at least a few minutes. You can also attempt to locate the CLR CMOS jumper on the motherboard and short the pins.

6.In some cases, you may not be able to jump from an older UEFI release to a much newer release. You may need to "step" update, this will mean upgrading incrementally to a slightly newer build first prior to going to the most recent build/release. In most situations this not required. I also recommend you backup your system prior to any flash/update and always advise flash/update become executed from a fresh loading (F5) of UEFI defaults. The board model/name is on the right-hand side and the version number is on the left-hand side. To download the UEFI BIOS please go to

Hey Asus: if you don't want to enable Zen3 on C6H at least fix current bugs.

Tempted to try the modified bios, if it doesn't work, bios flashback the old bios.

And Hero! For the amount of testing we did for Asus on this platform, we sure got shafted

Flash, AhAHHHHHH, saviour of the universe!

Does it come with a new version of AGESA?

Why was S0ix support not enabled in Asus BIOS given that AMD added the functionality since AGESA 1.1.9.0?

The B550-F is not the latest AGESA 1.2.0.3 patch B, it is still patch A. They really should add that to the patch notes for these BIOS so that people know.

So, even though it's newer than the Beta with 1.2.0.3 patch B, it's still only patch A? That's pretty weird, and definitely something they should have mentioned.

If something isn't in a change log it means it didn't change.

Asus ever going to update the $350 Crosshair VI Extreme with SAM support?

Not until AMD provide a new AGESA for 300-series boards.

I just updated my BIOs yesterday, damn it. Is it ok if I update it again so soon? MB is Asus Crosshairs VIII Dark Hero X570.

no. if you update too fast your motherboard will be upset with you. /s

We’ll gosh darn it, I don’t wanna upset her of all things.

Once again Ryzen 1 is left in the dust, even though RAM still does not run at rated speed after so many years.

If AMD and Asus really intend to keep the hardware in Early Access state forever, they should probably start paying compensation or offering replacements.

This isn't what we signed up for.

Once again Ryzen 1 is left in the dust, even though RAM still does not run at rated speed after so many years.

Ryzen 1000 has a terrible IMC (rated for 2667, clocking your RAM above this is an Overclock so it's not supported. Thinking "my RAM is rated for x but it can't, AMD bad! is idiotic) that struggled to reach 3200, outside of Samsung B-die kits. It was a brand new uArch, built at a time AMD were facing bankruptcy. And as how technology always works, Zen+ and especially 2 and 3, significantly improved and overhauled RAM compatibility and support.

If AMD and Asus really intend to keep the hardware in Early Access state forever, they should probably start paying compensation or offering replacements.

This isn't what we signed up for.

Your ram on the qvl?

So whats up with the TUF boards? I could pick up the B550 TUF Plus for $130, but the Audio driver is 1year older compared to my X370 and they dont even release this bios update for it?

I'm too. I told you that the audio drivers for that mobo are like a year old, they dont even release a Win11 bios and it seems that they dont care much for that board at all.

Like I said, the latest driver is old, it's from last year, while other boards have much newer, even my current board from 2017! Downloading it again wont make it newer, but maybe i'm wrong.

I have the Asus TUF B550M Plus and there is a BIOS for this, 2407 which specifically states support for W11.

Didn't he mention the ATX version, too lazy to check the website but it's not in the op's list.

So can you flash the mATX bios to the ATX version without issues? Could you try flashing the latest ATX version bios to your before I order the mobo?