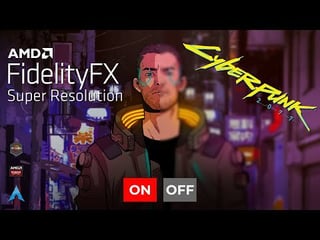 It really does look the same to me, I mean...there are probably differences but is very hard to perceive.

The improvement in FPS though, pretty sweet.

I made the video, so I was zooming in and out closely, so I could tell the difference, because I know "where" to look. But my girlfriend for example could not tell which one is which, showing her the pictures side by side.

CP2077 is really perfect for FSR - the game is never super sharp to begin with and there is a lot going on.

Would be nice if they implemented FSR in an upcoming patch.

I would really like too see a comparison with RT reflections instead of Screen space reflections as the latter gives an awful grainy look unless it is on Psycho.

YouTube videos not good to see differences without zooming. But I do appreciate it looks close to the same either way.

Cool! FSR looks close to native and I doubt you see any difference in motion.

Does it work on Windows too? Would love to test this with my 6900XT.

Unfortunately, it does not work on Windows as of now, I mean specifically on Cyberpunk. OP did on Linux using some mod...but yes FSR works on a few other games

Here is a link to supported games on Windows with official support.

It works on Linux as a form of fake fullscreen window. You know how a sub native resolution window can get stretched to fill your entire screen? Well, you can change a setting so the window is upscaled using FSR instead of the regular Bilinear Filtering, that's how it works.

It haven't been done yet, but it's possible to do the same on Windows. This program does that with a variety of high quality upscalers but it doesn't has FSR yet. The next version, however, will.

Is there an English version?

Pretty acceptable quality if you're not zooming or pixel peeping.

About the same as DLSS performance mode going by the amount of blurring going on over the whole image, especially the sidewalk, but its very very noticeable. The end result is still usable though. That said, this sub has spent months trying to destroy DLSS even when results were far better than this, so to hold this to the same standards would mean its terrible.

That said, it does look comparable to DLSS performance mode, which is far faster.

A little oversharpened to my eyes but definitely not bad at all, especially to say it's not a 'proper' implementation.

A little oversharpened to my eyes

Check again, the oversharpened is the native one. We got baited since the positions are switched compared to video, FSR is on the left while Native is on the right.

Pixel zooming just seems to me the most outrageously silly test anyone has ever thought of. Your eyeballs don't zoom in on shit, they generate an image, so only the practical stuff matters... like are there aliasing problems, artifacts, ghosting, rendering errors... etc... and in the video of this there's zero issues, which is good. Now we need better developer support and not to resort to mods due to irresponsible developers.

The thing is, your eyes do not zoom in no, but when you actually look at the whole image from a normal viewing distance, all those small pixel peeped details together give a visual downgrade that is noticeable.

Sure, for somebody that just wants to be able to scrape by, that is a sacrifice worth making, but it is not close to native or no difference. And that is at 4K, at lower resolutions it is really obvious.

I was perfectly fine playing games using gpu scaling and a reshade sharpening filter on my shitty laptop,

FSR is a tiny bit better then that, Nvidia's new "Sharpening +" or AMD's CAS will give similar results with other simple upscaling methods.

However it is easier for people to just toggle an option in the game menu, but for anyone who has been doing upscaling + sharpening before I just don't see where the hype is coming from.

I do however feel that AMD needs to provide some other upscaling solution using similar tech to Nvidia's DLSS or some form of temporal solution, their GPU's are similarly priced and don't provide a real answer to that, FSR is not enough to compete.

It is a good thing to offer something to people that don't have any upscaling solution or don't know how to get a decent image using regular upscaling techniques.

But let it be an extra, not an alternative to a far superior tech.

I am looking to buy a product that offers me as much as possible for similar prices and AMD has not convinced me with this, I don't care about the company that makes it, but I do want to buy a product and not feel like I am missing out on something.

Any chance of a ray tracing test?

Doesn't work on Linux yet.

AMDGPU-Pro works with RT. Phoronix even benched it

Slightly off topic, but what is your power consumption at idle? I have 2560x1440 monitor and it's around 28 watt. In Windows it's around 7-8 watt. It seems like current driver for RDNA2 is still quite bugged..

rocm-smi reports around 40W for me at idle unfortunately (6900xt, 4k 120Hz screen). Used to be the same on Windows but a recent driver fixed it on Windows. Fingers crossed for Linux too.

i hope cdpr adds fsr to this game but likely wont

Nvidia sponsored title, so I don't think so they will.

CAS was in so idk, they are probably busy fixing the game.

I'd love to see how it handles the artifacts created by screen space reflections while driving fast through the city during the day/evening. That heavy grain effect is the thing I dislike the most about the graphics in Cyberpunk 2077.

I’m still waiting on Cyberpunk. How has the patching been going? It’s mostly everything fixed yet?

The sub of double standards.

it looks so bad without ray tracing