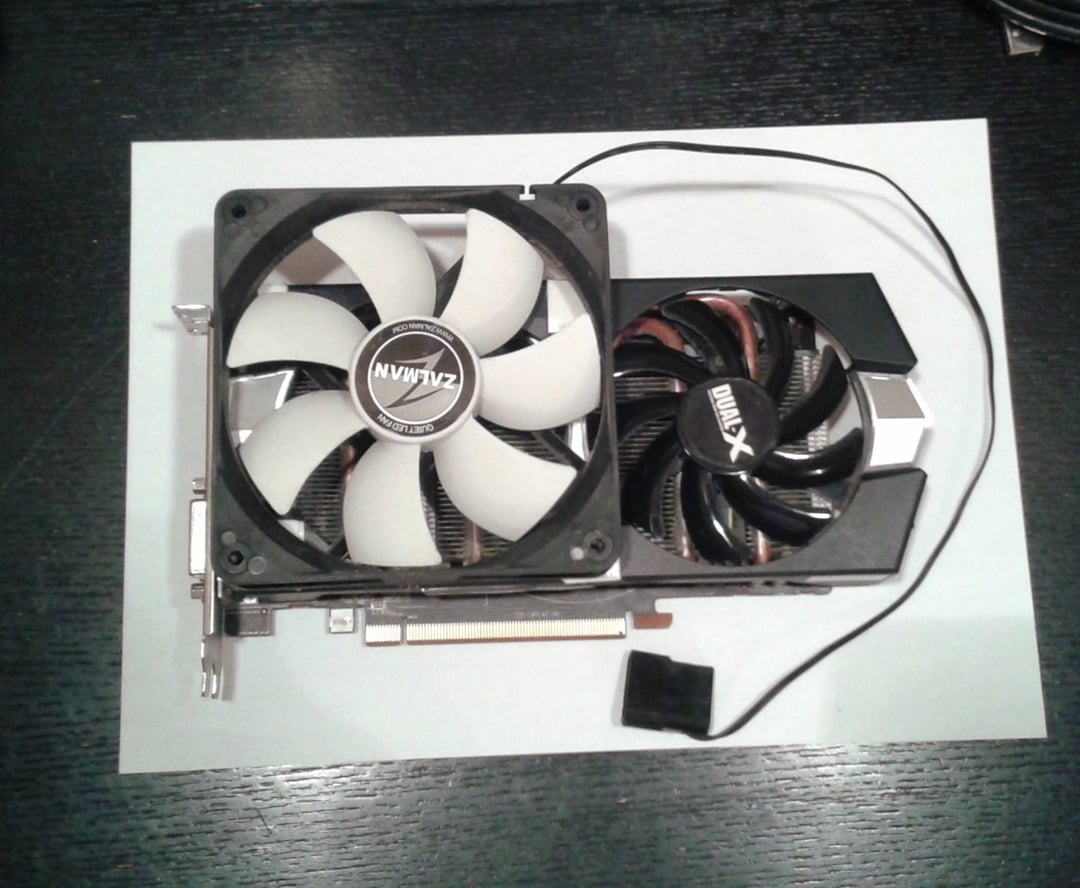 Problems started in May 2019. Screen would either freeze or go black in Windows, PC would crash and one day in BIOS I got artifacts and I couldn't boot into Windows again except in safe mode. Just when I wanted to pull the trigger on a used RX 570, I saw some videos about baking it in the oven. The card was broken, out of warranty and I had an old oven that wasn't used, so I tried it. It worked 8 months until the next crash and artifacts.

As you can see in the picture in the meantime I also had to remove a noisy fan and glued one of my case fans with some double sided tape. Works fine and I haven't seen GPU go over 70°C during gaming even now in summer when my room can go up to 29°C. On Unigine Valley benchmark it can go up to 76°C which is still under control.

RX 570 were selling for just 100€ in May 2019 when it all started and now are closer to 200€, so in retrospective it might be better that I bought it, but I don't really need a more powerful GPU since I only play old games.

I thought it was funny and informative story to share if someone might want to try it during these desperate times of high prices.

I thought it was funny and informative story to share if someone might want to try it during these desperate times of high prices.

i do have some old gpus that i would love to use in a second build so if i may ask what is the procedure exactly, or if you have a video that would be nice

There are a bunch of videos on YouTube you can watch, but it is not exact science, so I can't recommend anything.

I just remove the heatsink, clean the thermal paste and then screw 4 long fan screws into the holes on the board to make 4 "feet" so the board doesn't touch the baking plate I put it on. On YouTube videos they usually use aluminum balls as "feet".

I already wrote various temperatures and duration in the first post, I didn't really find a winning combination. Oven must be preheated just to be clear. When it is finished I recommend to slowly cool it down to avoid any possible cracks in solder. First open the door to half and wait a few minutes, then open the door completely and wait 10-15 minutes to cool down, then gently remove it from oven and let it cool outside to room temperature.

The first time you bake a GPU it will stink a LOT of solder and you need to keep open all doors and windows and get out of the room. The next time it is barely noticeable. Clean your oven after baking.

You can also use a heat gun, worked for me. Also I had some small cheap oven and it heated unevenly so capacitors on one card just kinda exploded, so you may want to somehow cover them if that's your case as well.

With heat gun I just heated area around the core for a while, till the solders started looking a bit liquid

So what is the explanation behind this? Why does putting a 270x in an oven work? I thought the days of bad solder was behind us?

I know about the Playstation 3, that used bad solder if I recall correctly? So after the oven treatment the connections where restored.

You answered your own question. The card was 6 years old when it happened, probably some connection got loose over time and melting the solder fixes it temporarily.

It was the first applications of leadless solder and processes were still being fine tuned. Like you mentioned PS3 suffered from the same issues, I resurrected mine during 2 years with a heatgun before it finally died.

Reflowing the solder can remove the 'tin whiskers' that lead-free solder form.

Man I'm so fucking lazy. I would have binned it and just bought a new one. Hell I still have a box of new fans sitting behind my chair that I haven't put into my rig yet.

Man, it took me like 3 years to put my new CPU cooler into the computer. In the beginning this was a fun experiment, but with current GPU prices, it is also an act of defiance. I'm not paying double the price, at least not until this thing dies.

I have this exact graphics card! I replaced it with a 1060 in 2017 since it couldnt hold up to many games anymore. Did it improve at all? What kind of things do you run with this artifact?

I run artifacts. When I built my current computer in 2014 it was the first time I had a computer that could actually run latest titles back then. But after playing few new games and seeing some of my old favorites having some questionable design choices in sequels I realized game design went into direction I didn't like and that I enjoy playing older and simpler titles. So, I am now gaming in reverse; exploring older and older games and sometimes spicing it up with some interesting indie game. This year I even played some PC games from 1989 and 1990. I basically never used that PC to its full potential, except when I played Crysis 3 and Hitman Absolution.

Loved your story. I particularly like how you have persisted in using this venerable card.

FWIW, I went from an R7 360 around the same time to my current RX 570. Both cards are still working fine. The hundred you didn't spend allowed you to learn this 'rebirth' process and I would think it was worth it.

Nice to see you are playing old games. There is much satisfaction is some these old in age but new to you games. I still play Doom '93 and especially the source ports. I also will play Diablo 1 and 2 as the gmaes them selves offer so much play time. I see Gog.com has just put out a 4 game free selection that just might be up your alley.

Have a good day and thanks for your helpful and interesting post.

I didn't write it in my first post, but I had artifacts in BIOS and could only enter Windows in safe mode or when drivers were disabled, when I enabled drivers it would crash, so it is similar to your problem.

So... does it actually work? My R9 390 died 9 months ago and i haven't found a gpu yet. The screen used to freeze with a weird noise while playing rdr2 or running a benchmark 8-10 mins later(at a specific 1xxxMhz if i'm not wrong). 3-4 freeze laters it stopped working.

I didn't try the oventrick because i thought it was useless and only dangereous, but at this point i might give a chance

Yes it works. It is my main GPU plugged into the PC I'm typing this on, I don't have anything else. I took the photo the last time I had to bake it. You describe exactly what is happening with mine. The screen either goes black, freezes or has a repeating pattern like those Windows 98 wallpapers. Usually the sound goes crazy, but sometimes it continues to play normally few seconds until the PC shuts down. Then I either get a black screen on boot or artifacts followed by a crash when entering Windows. Then it goes into the oven and problem fixed.

If you understand the mechanics. There's no reason it would be dangerous.

The process only works conditionally based on what kind of damage your GPU suffered prior to death. Which is a separate issue.

ELI5: what does heating the card to extreme heats do for a "dead" card?

Solders remelt together works a bit more and dies

Glues the parts back together

Solder melts at 400F which ovens easily reach. There are reflow ovens for this which are small and have precise temperature control.

heat from regular use and oxidation over time can degrade solder joints. A quick trip through an oven at reflowing temps help restore these joints. It will however not resurrect dead components.

My 6800 XT had minor coil whine the other day, in the oven it goes

Coil whine? Oven! Driver crash? Oven! Bad fan? Believe it or not... straight to the oven!

Amd has the best gfx cards because of oven.

ik a park and rec reference when i see one.

Maybe try reballing instead of baking, I've heard it's much better

Yes, but that needs special equipment. Some PC repair shops offer that service, but it is not worth it for such old cards.

I mean.. if he's got the equipment why not? But yeah baking it is a simpler solution

I had 8800GTS which i used for couple of years like that, baking it every few monts lol

One of the fans broke on mine, so I bagged it. I still keep it around as a backup. If the backup fails, I have an XFX 5770 as a backup too. Good times :p

I was in the same boat (black screens), i was using HD 7790 from 2013 and this problem started around at the beginning of 2020, every time i would wash it and heat it with my hair dryer for several minutes.(get it super hot)

It worked fine for several months the first time, then a few less after the 2nd wash+heat, did this a lot of times but then it started crashing on load (would work fine while not playing any games).

I would say keep baking it when needed especially considering state and gpu shortage altho you deserve better, this is depressing.