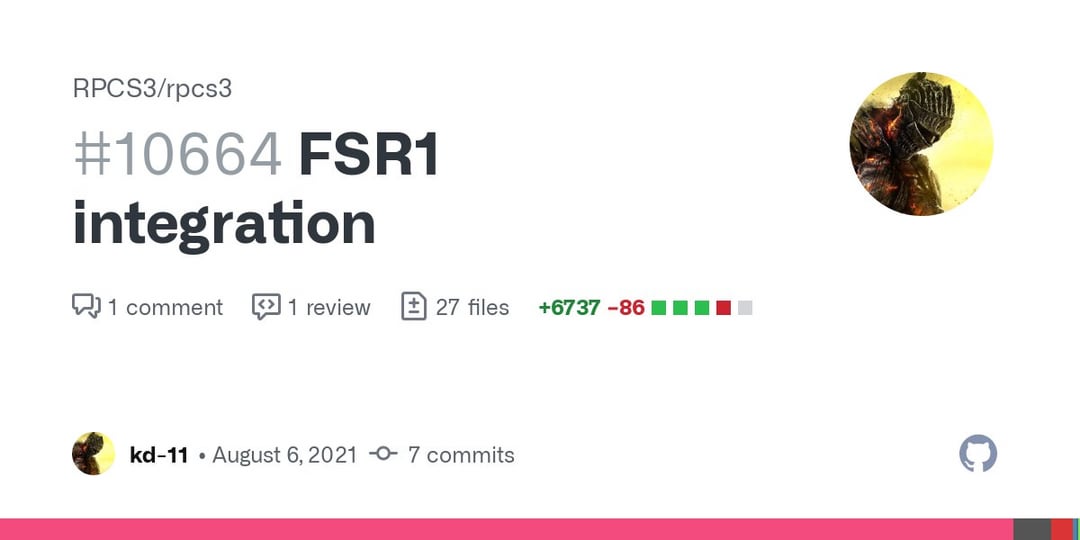 Yes, PS3, and therefore RPCS3, are very CPU heavy, but FSR has benefits. PS3 games are meant for low resolutions and often have low resolution textures, using FSR with RCAS sharpening at 50% - 90% helps make some games look better. Another benefit is for low power devices such as handheld and mini PCs (i.e. the upcoming Steam Deck), as well as users with weak dedicated GPUs. If you want to play demanding games at high framerates, even your not so low-end dedicated GPU can suffer.

FSR also amplifies the lack of anti-aliasing, as it's required for FSR to look decent

x86 may be easier, but holy hell could Sony build crazy custom chips.

It will be useful on high end pcs, on smaller devices it will be cpu limited and will run like ass even with fsr. Something like a steam deck won't run rdr at 30fps if you are cpu limited with a 5900x

You can render PS3 games at 4K even with lesser cards, so yeah. The real heavy lifting is done by the CPU, and its workload won't change with higher resolutions unless the game some LOD bias shenanigans going on, which I highly doubt in a PS3 game which was originally supposed to run at one fixed resolution.

My dude... What about people with weak GPUs... This is good news. Be happy about it and move on.

What type of bottleneck? Would more cores help or is PS3 emulation bound by single core performance?

single core performance always helps emulators, but rpcs3 is of the few that do make use of multi core processors. RPCS3 iirc is designed to use up to 16 threads, but for it, its game by game situation on whether threads or IPC matters more.

True, but let me tell you how many people are running Intel integrated graphics, it's like 65% of the worlds total computers, and they will be bottlenecked regardless.

FSR can be used as an upscaler where native resolution games played on moderate graphical system for emulation. So it just increases the image fidelity.

Suprising it would even need this. The bottleneck in this emulator is the spu emulation, which doesn't have anything analogous to current CPUs and is what holds the more advanced games back. I guess something like AMDs latest apus could maybe handle resolution better in simple games (demon souls), but you really need beefy cpu and TSX to get it going.

You're out of date on the TSX part. It was important for RPCS3 a couple of years ago, but not so much now. The developers have put in the hard work to make it largely irrelevant. Good thing too, as Intel are issuing microcode updates to disable TSX even on the small range of chips that have it, due to security concerns. 10th- and 11th-gen chips don't even have it to begin with, and nor will any others going forwards. It's a dead instruction set.

You still need TSX for lots of games. The emulator isn't as reliant as it was on it, but my 6850k is faster than my 10700 in hard to run games like Uncharted, despite 400mhz disadvantage and ipc.

I think that this (or something like this) is going to become increasingly interesting the older the games, and the better the emulator becomes.

Emulating RSX on games than used sub HD resolution won't need upscaling. You literally just tell the emulator the actual resolution you want and anything faster than a 1030 probably can handle it no sweat.

You don't want sharpened 720p coming out of an emulator like Rpcs3. You want the actual resolution to be much higher than that.

Of course. I wouldn't be surprised if it's one of the last games to make it into Playable. It's surprising it even runs as well as it does on high end CPUs already.

I played through it. Was it rough? Yeah, but not unplayable.

Says the person with a 5950X and watercooled Radeon VII

i was very sure that this would happen very soon nd im happy it really happend, i mean some modders already made it work on assetto corsa, gtav, and even cyberpunk 2077 without developers help or asistence.

this tech is gonna destroy dlss, when fsr will get more games to support on pc, and it will happen very soon.

It would probably be pretty easy to add FSR to cemu, even if it’s unofficial.

Can any emulator enthusiasts let me know: is PS3 emulation better than PS2 emulation like with PCSX2? Even with a 3950x and RTX2070 S there are some games like Ratchet: Deadlocked that run super slow on PCSX2.

The PS2, at best, can only use 3 cores for direct emulation with hardware rendering, and that's only if you can use multithreaded VU. And for some games, you have to disable it. Software rendering only ever takes your GPU load and put it on your CPU instead. The workload required for the 3 main components (EE, VUs, GS) are all roughly equivalent, but fortunately many devs did not use them properly. Katamari Damacy should be able to run on potatoes, but a game like Champions of Norrath uses every piece. You need a newer CPU, and a newer powerful GPU. I am unable to play it at full speed with a 4790k and RX 570. And yes, the GPU is extremely important here due to GS bottlenecks

For the PS3, the story is very different. There's 3 main components to emulate, the single PPE, the 6 SPUs, and the RSX. The PPE is pretty much a bog standard IBM CPU. The RSX is a kinda weird, but mostly weak GPU from Nvidia. The SPUs are the specialized CPU cores that handle a lot of the graphics power. It's what made Cell unique, it could do these highly specialized instructions better than equivalent GPUs. They're tightly integrated as a result.
Many games simply did not use the SPUs much at all, basically meaning you only ever need to emulate the PPE and RSX. As long as you have modernish hardware (Intel Haswell and any supported GPU), you could probably run these games. However, unlike the PS2 these games are a lot less common. At least the games you'd bother emulating the PS3 for. All the popular exclusives and all the good ports to the PS3 use the SPUs on some or all capacity. To emulate these you need a new CPU and a new, mid to high end GPU. This is especially important when you want to run games at 60FPS. MGS4 is almost playable at 30FPS constant on a 5GHz 9900k and I believe a 2070. Naughty Dog games aren't even close at this point

You need good hardware for either console

Wow - super detailed response, thanks a ton. I was hoping the performance would be better for emulating the PS3, but I guess the specialized-hardware problem still exists with it. I'll give it a try and see how it goes.

In my experience, PS2 emulation works a lot better, I could run the original ratchet and clank trilogy with only minor slowdown at 4k, and I have a 5700 which ain't great. PS3 is a lot more complicated, and is throttled by the CPU. You might have pretty good performance with your setup, as your CPU is very good, but it requires a lot of fiddling around in settings to get it working right. Also, a lot of games, especially naughty dog games, are completely broken and basically unplayable. These are getting fixed at a steady rate though, as games like the PS3 ratchet games have come into mostly playable state quite recently.

Intel Core i5-6200U with Intel HD Graphics 520 ran Godhand 15fps at 480p. It's a weakass system, so anything beyond that would be good enough

Pretty incredible, especially if they plan on adding or already have resolution scaling

Rendering at higher resolutions has been supported for many years, as well as Anisotropic Filtering

It's cool, but I don't really see the use-case considering it doesn't take much GPU power to run RPCS3 games in 4K. Using FSR for "super sampling" sounds like a bad idea since you're taking a muddy 720p image, blowing it up, sharpening it, then blowing it back down to 720p.

You can find several cases where GPU gets a beatdown. Even on my RX 6800 XT it's better to render at 1440p and then use FSR to upscale the rest to have NieR Replicant running at 4K120 than to render at 4K, the performance loss is quite considerable and the game is not 120FPS stable.

FSR doesn't do much at all.

Especially if it's a blanket implementation and also affects post processing, UI, etc. Gonna have to wait and see. I guess it could help if you want to run it on an apu like the 5700g on a 4K TV.

It may help really low end gpu's that struggle at 720P or less. Also it proves that FSR is incredibly easy to implement so why not?

For integrated GPUs it might help, especially if you are willing to play at higher resolutions.

thank god these days most games are ported to PC, I dont have to deal with this emulator to play some popular games.

Now i can play top spin 4 with fsr xD

It didn't really need it but that says a lot about how easy it was to implement.

Does this emulator run most games at full speed?

This is actually the second emulator not the first but still nice.

I added this to the wikipedia page for FSR.

edit: I am wrong Xenia was AFTER RPCS3

Which one is the first?