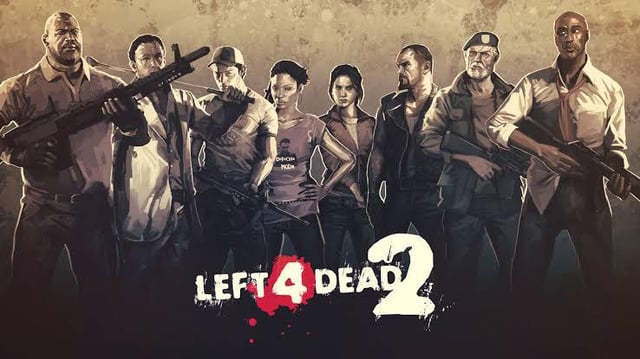 I remember when some people were angry that valve would release left for dead 2 only one year after the original. Thankfully valve took their criticism to heart and vowed to never again release a sequel to one of their franchises

Portal 3 will be released 30 years later

I've made my friends play Ricochet but they can't get into it. I admit it hasn't aged so well but damn a sequel would be amazing.

In my home we still play L4D as frequently if not more frequently than any other game. Such a classic!

It's how I keep in touch with my college friends.

Playerbase is still strong these days. Always a good 15-20k people playing depending on what time of the day it is.

Honestly I bet Back 4 Blood kinda flopping drove even more people back there. Those numbers are crazy though, I remember like 4-5 years after L4D2 released it was relatively hard to find games late at night and it made me so sad. Love to hear it's thriving.

I think it's mainly a design philosophy where they are only willing to make a product if it is exponentially above their last. Half life 1 was incredibly cinematic for the time and pushed gaming forward, as did half life 2.

My assumption is that the goal of their relationship with VR was half life 3 but instead decided to do a spinoff when things plateaued to the quality of bone works, which was a pretty impressive leap forward for VR in it's own right but didn't pass their rigid philosophy of growth.

You really think it's coincidence that their last major release (DOTA 2 I'd argue was their last huge game) was in 2013, the same year that Steam became 75% of the video game distribution market? I think it has a huge amount to do with the fact that studio no longer needs to make games to be profitable. Granted, Steam was around before that, but by 2013 it was practically a whole industry.
They went from groundbreaking release year after year: Half-Life, Counterstrike, TF, Left4Dead, Portal, TF2, Half-Life 2 and both it's episodes, Portal 2, GMOD, all the same decade not counting various offshoots of those titles like the Blue Shift and CS:O. The next decade we got Portal 2, Dota 2, CS:GO, all before 2013, and then Alyx, and like a card game I guess. I get video games are harder to make now, but if they were hard up for cash I pretty much guarantee Half-Life 3 would've come out by now, right?

I remember the Left 4 Dead 2 hate because it released just a year after the first one.

If there's going to be a third game, I hope it's about the Midnight Riders

I like the idea that they're just die-hard metalheads who've made the decision to stick to their tour across the country despite a zombie outbreak. Each map would start with you rolling up into a town and having to fight your way to the gig, then fight your way out once the show is over.

Gets to Whispering Oaks:

"Hey, what shithead used up all our pyrotechnics?!"

Kind of, but not really its successor. Left 4 Dead will always be the original, it was the game that "stated the genre". Also, it created the first special zombies (boomer, hunter, smoker, witch, tank, charger, jockey). The ones from Back 4 Blood are more like a copy of the originals (though, they also added bosses...)

It is a successor. Name and all. It’s pretty shameless about it. The same people worked on both.

So… If I loved the Left4Dead is getting the Back4Blood game a good idea?

It seems like a copy because its the same dev team that made the game. They just don't own the rights to the game, so they changed the name.

If it weren't for the complete bullshit card system I'd call it that. "Lol here's a random OP boss, go fuck yourself"

Back 4 Blood is a sad try at a spiritual successor

I don't remember Left4Dead being ridiculously difficult, buggy, and being way too serious in tone

It’s a bit similar. I’ve had a lot of fun with Back4Blood playing with my brother and a friend. Good old stupid fun for a few hours. Nothing more, nothing less. Sometimes, just perfect.

Vermintide 2 if you wanna replace zombies with rats, guns with melee weapons, and want holy Sigmar to bless your ravaged body.

Vermintide 2 has such good gameplay, especially when you first decide to move up to Legend. Am hyped for Darktide

Vermintide was alright, but Versus was a big part of what made L4D special

Back 4 Blood is a worthy successor. Coming from a l4d 1 and 2 veteran.

There's a TON of potential if they can tweak it. I just beat the campaign with friends last week. On rookie we had to replay levels a lot of times. I like a difficult game, but the mechanics are too biased against the player. You basically have to hope for fair corruption cards, and then the game can still spam special infected which are all high health, armored, and relentless.

And I really want to see some better level design too. Too many open suburban areas I miss the cities and hospitals.

I too have been hoping for a city area but I think the next dlc will be underground. More exploring of the tunnels.

B4B is a ton of fun. I'm really hoping we see the same kind of mod support like we did with L4D1 and 2, but I see little chance of that happening.

It's just not possible. For L4D it was possible due to three factors :

Source being quite open and built with mods support in mind (every Source games are considererd half life 2 'mods'). Valve's own game assets are in their own engine formats and can thus share them without fear of it being used outside of Source engine projects. Valve wanted to promote the Source ecosystem.

It's a game running on Unreal Engine, which mean it's fully compiled (with data/binaries probably encrypted too on top), It doesn't offer any native modding support so if you'd want mods it mean the developers need to individually think of any features a modder could want and turn it into some kind of API (ie: what Minecraft has been doing for the past years) When uncompiled Unreal Engines assets are in raw format, textures are standard PNGs/JPEGs/TIFs... meshes are .OBJ or .FBX... Formats that could be re-used anywhere without Turtle Rock consent. Turtle Rock and/or Warner Bros based the game economy on selling additional campaigns and content in the future, they probably wouldn't like to have talented modder interfere with that.
11 ： Anonymous：2021/12/13 14:49 ID: hodu5pl

Hey now give them some credit. They can count in their own special way... Maybe we'll get Left 4 Dead: Alyx

I still play with my friends on realism mode. Some of these maps are unforgiving when it’s that hard but we play for hours and hours with no boredom. Especially the mods. We all have cool or funny mods like for me the tank theme is giorno’s theme from jojo lol

Back 4 blood is nothing compared to left 4 dead

I remember most folks say 'Back 4 Blood is a great game, but if you're hoping for Left 4 Dead 3, you'll be disappointed.'

And yup. I'm disappointed. It's a fine game of it's own, but lacks the incredible design and charisma that Left 4 Dead had.

Man I really wanted to love it. It’s just so…. soulless

What’s with all the B4B hate in this thread?? It’s an excellent successor to L4D made by the same people.

It's got some serious flaws which mean even people that enjoyed the game have soured a little on it.

The first missions of any act are the hardest, where you have no cards and trash weapons, and the acts just get easier from there. If you get a hag with white weapons you might as well restart.

The card system is interesting but you never get to use your full builds, because it resets every act. All those synergistic cards and your build is always incomplete except for the final mission of each act.

Some of the corruption cards are crazy, biohazard literally made the game easier while rolling an early boss/hag can be a near guaranteed wipe. Fog can be nigh unplayable too, sniped from specials you can't see at all.

Carrying over missions is weird, kind of useless unless it's with a set of friends. You can't just jump into a solo game, you have to queue and have no players join after a couple of minutes. And if you WANT to play with people, then you have to keep restarting when it loads a solo game with bots.

Matchmaking sucks because you take over the character as-is, with their cards, so you always have some crappy bot deck.

It's a really great base of a game, but it needs a lot of iteration and polish. I just hope they can get there, I'm already having trouble finding players on the odd occasion I play it.

While technically true it was made by the same people, Turtle Rock Studios received significant help from Valve on L4D, and I'm entirely convinced they're the only reason it turned out right, given both Evolve and B4B, both TRS originals, have had their share of significant issues.

For me it was like left 4 dead but remove all the charm, add cod gunplay and too many progression mechanics. Left 4 dead is fun because of its simplicity for me and my friends.

I agree. B4B is basically a revamped version of L4D. If you liked the original I don't see why you wouldn't enjoy B4B

A sizable amount of the Left 4 Dead community enjoy playing PVP versus, which is not present at all in back for blood.

All the sheep with their B4B. That is not the same. It's like saying WWZ and Nazi Zombie Trilogy is L4D. Might have similarities but not even close to these two games.

I don't know why certain people dislike B4B, I find the game pretty much fun and it's a good change of pace using the card system and rarity system, gives the game a good challenge alongside the bosses as well. You can say it is it's own game and I wouldn't disagree with you.

Point is, they made something that Valve was afraid that it might've flopped for them (yes I know users had a buggy start to the game at launch, but I've never experienced a bug yet).

Not every game is perfect at launch, there will always be bugs at the launch of any game, no use shouting at devs telling them to fix things ( and by rushing them, then more bugs pile up ), patience is a virtue ( I know some publishers don't go by that, but I digress ), so let them do their jobs.

They took the project upon themselves to create "L4D3" and I think they made an awesome game and calling it B4B ( cause y'know, legal reasons and I think it suits it ).

This is in no ways being biased towards any of the two games, they are both great games and this is merely my opinion, I'll respect yours as much as you'll respect mine, good rest of the day/afternoon/evening to you all.