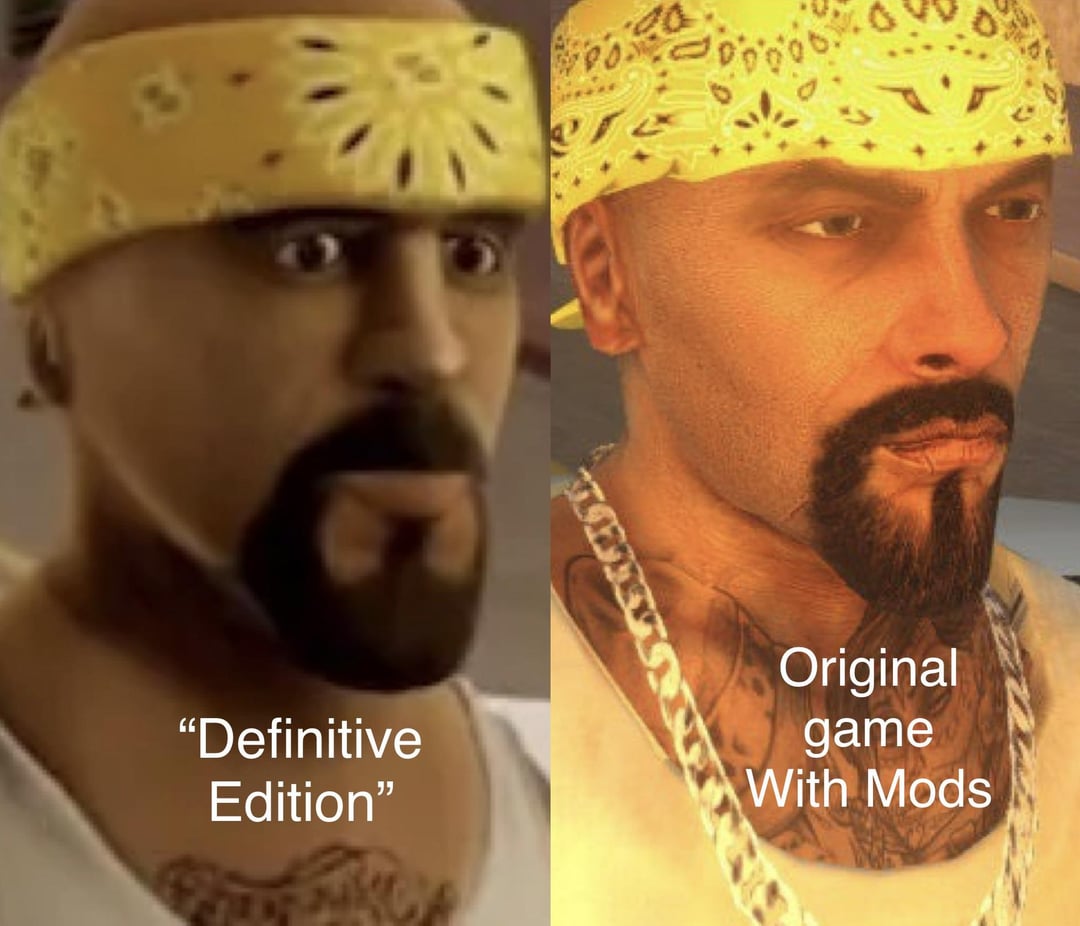 They hired the sims developers it seems

One on the left looks like a character from that old Rudolph the Red-Nosed Reindeer stop-motion movies. Now I know why Yukon Cornelius loves the "snow"...

WHat is hilarious is how most MODs say that for the mods to work, that people need an official (legally purchased) copy of the game, something to incentivize prospective players to buy the game.

But, when I hear about these AAA-holes who forcibly shut down modders, I always think 'If you don't want me to buy your game, just say so. Don't act like an A-hole about it!'.

well, they removed the original games from sale to stop you buying them, so at least they've been consistent on that?

they removed the original games from sale

Do they want pirates? Because that's how you get pirates!

Friendly reminder that piracy is a service problem.

I guess their theory is that people wouldn't buy a remaster if there is a fanmod that is better. But even then, you need an original copy. So your complaint would be that you can't sell the same game twice to one person. Which is hilarious, because the most famous game with mods is Skyrim, and it was released three times. You never hear Bethesda saying that mods hurt the sales of Skyrim Special Edition and Skyrim Anniversary Edition.

Skyrim, and it was released three times

Yeah in fact Bethesda counts on modders to finish their unfished games. I got a lot of friends who don't like to mod and tell them that they at least needed the unofficial skyrim legendary edition patch mod as it fixed a lot of bugs that made the game kinda unplayable.

Anecdotally, I know there are people who are holding off on Anniversary Edition because the modding scene doesn’t yet fully support it.

However, Bethesda’s willingness to give pre-release versions of AE to the SKSE team to try and get ahead of the curve shows they know that supporting modders for older games with strong community backing is the way forward.

So does this create an incentive for modders to now make mods for "unofficial" games? If so that's hilarious irony

The entire reason they remade vanilla wow was because modders kept creating pirated versions and blizzard kept having to shut them down because they were so popular.

The reason the mods require the game itself is because the mods are free to distribute as long as they're not distributing code from the game. Rockstar can't stop them at all. But as soon as Rockstar's code is being sent out with the game...you're distributing stolen goods and the hammer will drop. Then any channel hosting that data will be shut down, the modders won't be able to get hosting for their actually illegal content, and no mod.

All they've done is change the torrents to have both the older version of the game with the mods built in. done us a favor really.

It looks like a direct to video 3d animated movie.

God I loved that game when it came out. So many good memories

They could have just bought the mods

If only! Then I might’ve actually wanted to replay these games

Right! Instead, Rockstar seems to be trying their best to NOT get people to play these games. It's like we're in the fucking twilight zone or something...

Anyone here actually knows *what* those mods are? Bc there are various things floating around on the internet that claim "to make a better remake" and most of them simply ditch GTA V look onto it and some smoothener. Which isn't GTA:SA. Oh boy I dislike what R* did, a port of a port (PC -> ios/android -> PC) is hilariously stupid especially the way they promoted it.

If they would have told from the beginning it's just a re-porting of the "updated" mobile versions, all this could have been avoided.

Wow the mod version is leaps and bounds better. They should hire the guy or buy his mod from him not shut him down.

To my mind, R* games won't hire modders and not gonna pay them enough for their hard work.

Yeah. I just can't understand it. If i were in charge the best modders would swim in money to work for the official team.

Exactly! You get it

They want money not quality work

Is it possible to still get these mods for the games?

this specific mod was taken down because the modder combined several other mods without asking permission of the original modders. it happened in 2018 and had nothing to do with take-two. source

san andreas ultimate retextured - a combination of several texture mods which was packaged without the permission of the original modders.

behind space of realities: american dream - a foliage mod which is available to download on various sites

90s atmosphere vehicles pack reborn 2.0 - a car mod which is available to download

san andreas insanity audio pack - an audio mod which takes sounds from GTA IV, GTA V, and max payne 3 and adds them to san andreas. also appears to be available for download on various sites

none of the mods in that video were taken down by rockstar, and the only one that might (rightly) be taken down at some point is that audio mod

They hired the company that ported the games to mobile then gave them a year to remaster all 3 games. I mean they didn't do a bad job considering, it's Rockstar that should have put the time/money in.

They look like something from a zombie survival mobile game ad.

I’m half expecting to hear some stock gunshot sounds just looking at it.

Is the image on the left really from the Definitive Edition? That's both hilarious and disappointing at the same time. Who the hell thought that would pass scrutiny?

How did you miss the shitstorm on the internet when the game came out? That’s not even the worst face in the game.

Are the mods still available on the Internet or are they all taken down?

There is one all encompassing unbreakable law in this reality:

I single handedly provided a high quality version of a completely removed music video that now has over five million views on youtube. Brought that shit back from extinction.

I suppose they're embarrassed that "amateurs" did a better job? I mean why else would they take it down, not hire them and release this garbage?

LOL, that's what they called definitive?

Even the unmodded characters look better. Aged yes, but faithful.