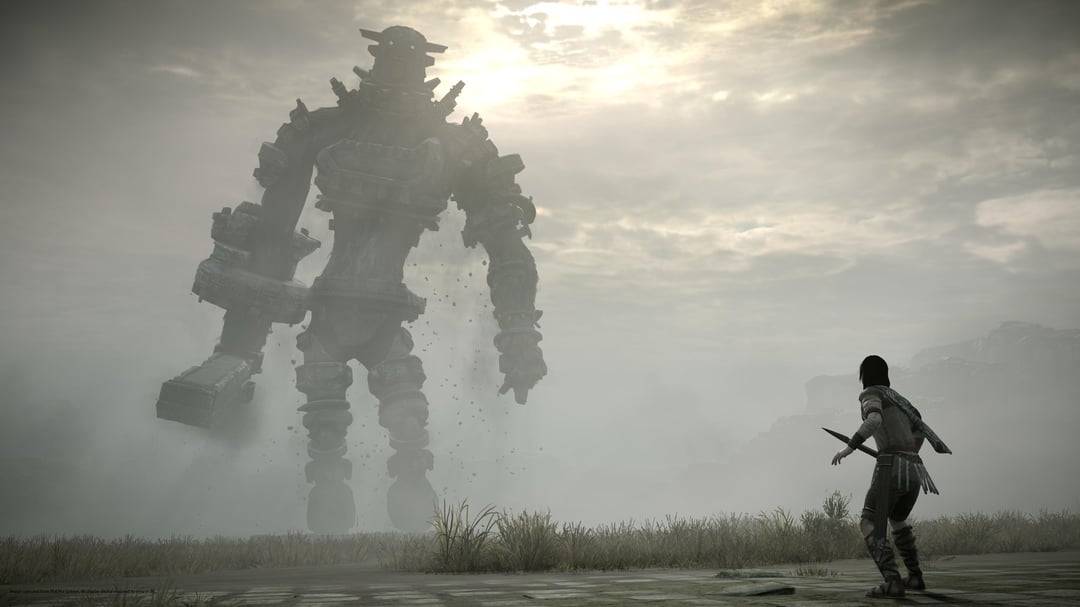 Blew me the fuck away when it first came out. Was incredible looking on the PS2. The remake is also really really well done.

Still did with the hd remaster on the PS3. It's legacy is difficult to surpass nowadays.

My favourite game of all time.

Shadow of the colossus

The final Colossus, Malus, that fight is an experience. Music is intense, the visuals are incredible, and it really requires you to know the ins and outs of the gameplay in order to succeed. Truly incredible artistry.

My favorite colossus was the bird, where you get up on the platform on the water and jump onto its wing. I never thought I would be flying around the arena on this giant bird. It was, truly, epic.

The final colossus was so much fun! I kind of wish they had made him harder.

I remember approaching the final area thinking “Where is it? Maybe it’s in that building ahead... oh...”

(I dont recall being so emotionally invested in the wellbeing of a virtual animal like I was with that horse.)

So much so, several pets have very almost been named after it.

I'll never forget the first time I tried to cross that bridge.

Immaculate game. A work of art indeed. One of the best ever.

How'd you feel at the end of the game?... I felt weirdly empty.

I had mixed emotions. On the one hand, I felt monstrous after slaying 16 ostensibly docile beings. However, I also felt confident things would improve and life would begin anew after the final cutscene in the shrine.

All this talk of video games as art... I subscribe to Jacob Geller on YouTube who does really thoughtful essays on the art of video games. The first video of his that I watched was The Decade-Long Quest For Shadow of the Colossus’ Last Secret, which was a study into art and belief, and was really fascinating... enough that I've probably watched it 5 times now.

Other great videos are "The Intimacy of Everyday Objects" comparing some games to still life art, "The Quiet Sadness of Mario Galaxy", and "Max Payne, Kane & Lynch, and the Meaning of Ugly Games". His eye for artistic analysis of games is great.

Breath-taking music intensifies as you climb a gargantuan monkey.

I don't understand why people won't say that video games are art.

of course games are art. Just like a movie, or a book, or a graphic novel. Created using imagination, talent and skill.

Gotta love the snooty high-art gatekeepers that won't recognize a visually stunning interactive masterpiece, but fawn over conceptual "art pieces" like crucifying yourself to a Volkswagen or having someone literally shoot you. Seriously, look up Chris Burden.

To be fair, the people arguing against are saying that just because a game contains art, it doesn't make it itself art. They argue the games are simply the thing which combines other art forms together.

I don't agree with that argument and here's why. Music is made up of audio. Paintings are made up of paint. What makes a videogame its own unique art form is that it's made up of choices. That's the primary thing which sets it apart from all the other art forms, and the people who craft those choices are absolutely artists who must consider the aesthetic, the emotional impact, and the overall message conveyed by these choices, just like any artist does.

This is why games are art.

Player choice is a bit weird since most art is considered a one way communication from artist to audience. It's hard for people to think of player choice as art.

But, I argue three things: art has always involved interaction between the artist and audience choice... It's just usually slower. When Duchamp made his famous artwork "Fountain" which was just a signed urinal, he was reacting to the reaction of art critics and the art world. He listened to what they were saying and responded with a sort of middle finger and question back to the audience. Less esoterically, films are sometimes shown to test audiences and their endings are changed based on the review audiences feedback and choices.

Secondly, there have been forms of choice in art before games: arguably, Rashoman, Sliding Doors, and even Groundhog Day are static media exploring the idea of choice in the same way video games do: characters make choices and then the world is reloaded from a save point, and a different choice is made. Video games simply take that idea to the next level.

Finally, we arrive at the idea of "the system is the message." Imagine a game where, no matter what you choose, two nations end up at war. The idea expressed through the system is "no matter what you choose, war is inevitable." Or imagine a Romeo and Juliet game where you can make the right choices and the lovers live happily ever after... But in most cases they die tragically. The system there is telling the message of what a dangerous game the lovers were playing... In 9/10 endings they die and their chance at happiness was so slim.

Alternatively, the game could have them die in every ending, regardless of choice, then the message is one of fated tragedy.

Or they could only die in 1/10 endings, then the story is that the orignal tragic ending was just a fluke and bad luck. True love can find star crossed lovers happiness.

Anyway, games are not art only because they contain other forms of audio visual art. Games are a unique art form with choice and where systems are used to express ideas.

Indeed, the Shadow of the Colossus is a game about false choice. The protagonist is compelled to kill the Colosusses through his blind grief and belief he can bring his love back to life. But this is impossible. Similarly, the player is compelled to make him do the same... The only other choice is to not play the game! So the player is fooled and compelled just as the main character is and through this they feel empathy towards the main character's grief.

As someone who went to art school, lemme tell ya “what is art?” Is a can of worms

Exactly. I think when people ask "is it art?" I think 99% of the time they're asking if it's high art. Anything is art. ANYTHING. The thing to discern is if it's worthy of that "art" title. Something like Hatred is art sure. It's got a message and all the assets that contribute to it being considered art. However, it's not good art. Or maybe it is, it's provocative for sure but I wouldn't consider it part of a fine art conversation. I would surely bring up Shadow of the Colossus in that convo

Because Roger Ebert wrote something in 2005 saying they weren't and somehow his terrible opinion along with other filmmaker's became fact for a lot of people.

It's not really a debate. Just a terrible opinion by a very vocal and respected people...who know nothing about video games.

Shia labeouf said it best,"Anything that moves you is art."

Also, Meryl Streep is an idiot.

Exactly. I can't imagine it even being a question unless you're willfully ignorant.

I cried little at the end

It's an interesting game. Very different than what you'd initially expect.

I can hear the music in this picture

Its predecessor, Ico, was one of the most beautiful, haunting experiences I've ever had.

E: Grammar. Teach me to comment before getting out of bed...

Shadow of the colossus

Damn I think that was a free game on PS Plus last year. I might've skipped on it though :/

Thank you for asking.

Getting that same vibe while currently going through Ghost of Tsushima.

They have been art for a long time. However, I'm happy that you have started to see this too.

Ahh yes the game that makes you feel like a monster.

Seriously - I played it back on ps2 and loved the game for the most part but quit after like the 6 or 7th colossus because I got the feeling I was hunting powerful beautiful things to extinction because my girlfriend was dead. Don’t get me wrong I’ll shoot borderlands psychos in the face all night but Shadow made me feel like an elephant poacher and it grossed me out.

So the game worked eh

First game I ever played on an ex's PS2, and I've always wanted to play it again.

I was late to this game but when I saw a review of it I literally went out that day to buy a used copy and fired up the trusty old PS2 and was simply amazed. This is easily one of the most amazing games I have ever played. Don't get me wrong I love a lot of other old school games but the way this makes you feel is akin to watching a movie or reading a book. There is so much going on and the aesthetics really help set the tone.

I picked the remake up on PS4 recently. Played to I think the third Colossus (the one where you swim out to a thin winding path up to a big platform and have to get him to smash of his armour).

Visually the game is stunning, no arguement there. Is it art? I don't know but it looked amazing.

But, the controls were dreadful. Rising the horse was a bit annoying, kept stopping at the slightest bump, navigating thin paths is annoying (too easy to fall off) and climbing is just too frustrating. Your character just doesn't seem to do what you want. I felt like I was fighting the controls the whole time.