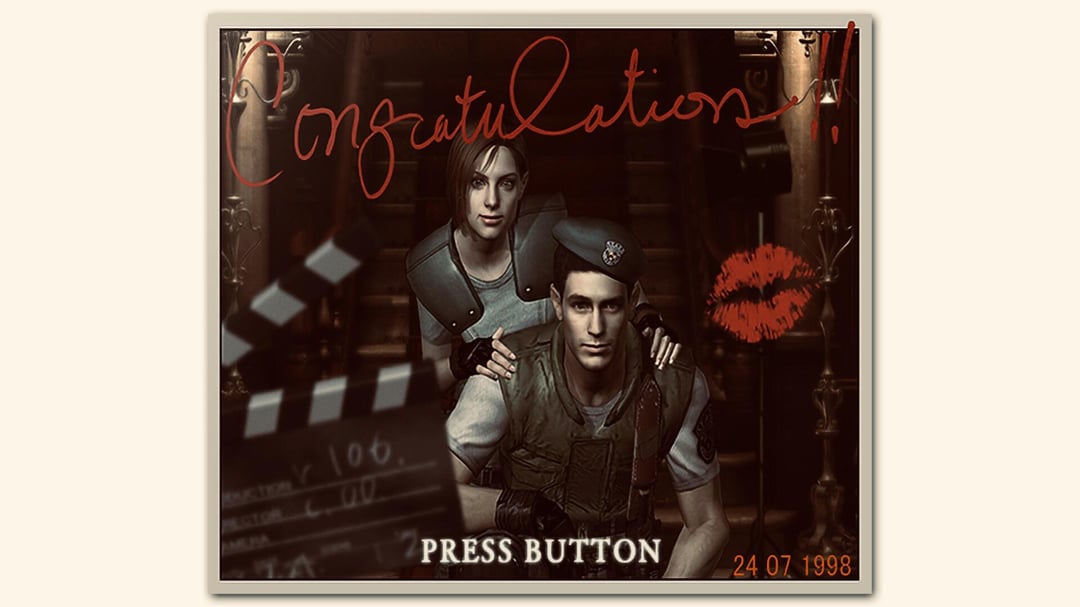 Resident Evil has never been about deaths and zombies. Just another postmodern game about people who shoot a movie. No one died 😉

This is now officially canon.

This explains the Chris recasts and remakes, classic Hollywood.

You mean the one Chris recast in 7? They had the same guy playing him from Remake up to RE6, but at least they brought him back for Village

Sewer Gators is a whole other layer of meta in that case.

Yeah, I absolutely agree with you. Even not taking into account kinda ironical sense CAPCOM put in this segment in Resident Evil 7, this crew made the RE universe feel more... realistic. You know, all the other entries in the series feel like they’re in another universe, which is so far from the reality (just look at these puzzles, quaint mansions and city architecture, and so on), but RE7 breaks this tradition (while being a genuinely classic RE episode), and it contributes somehow to the immersive aspect of the game.

This is going to sound insane, but as a kid who was freaked out but the original when I got lost in the hallways, I did think "why can't we all just get along? (With the monsters)". And had a dream/nightmare where Jill was walking alongside Tyrant and they were talking like friends. I had heaps of vivid nightmares about this game which would wake me in cold sweats.

Silent Hill gave me those reactions a couple times but resident evil only crept into my dreams atmospherically.

I'm grateful I haven't had a silent Hill themed dream... Then again I've played re a lot more. You know what really transferred to my nightmares of RE? Being disoriented with the tank controls and just getting lost and disoriented. I must've been 12 when I played RE alone. I remember really struggling with tank controls coming from games like Tekken 2 or 2D Sega games. I also had a crap sense of direction and remember feeling like I just couldn't find my way back to the main hall for safety.

Another nightmare I had was I can see myself in a doorway. So imagine the camera angle was from inside a room looking out. I could see myself holding a gun like one of the main characters facing the 'screen' if you will. The zombie is approaching from behind, which I, the camera, can see, but for the life of me I (the character on screen) just couldn't control myself to turn around and shoot it. I kept turning randomly and aiming at the wall and ceiling in that stilted RE fashion. As the zombie gets closer I start to panic and just as it's about to grab me I wake up.

I’m really curious on how the tyrant sounded in your dream.

I've had a lot of dreams about resident evil. Some of me favorite dreams, actually. Being lost in a mansion, finding secret passage ways. They weren't really nightmares or anything. Just spooky dreams.

Haha, lucky you. You know that hallway in og:re where you get the original broken shotgun? It has the same room underneath the staircase. The nightmare I had was this hallway was actually subterranean. I had fallen down a small window (like those basement windows to let light in) into this hallway. I was desperately trying to climb back out of the window by couldn't reach it. I turned my head and could see the shadow of the zombie slowly coming around the corner with the audio from the game of the groaning and wet, squishy footsteps of the rotting feet.

You remember that feeling as a kid waking up in the darkness, heart pounding. You try your hardest not to make any sound to attract it. You listen intently but can only hear your own heart.

I remember a few months ago, I played OG RE3 on an emulator, I had a dream that I got sucked into the game, Nemesis started coming after me instead of Jill because my arrival caused his "original programming" to go nuts, and when he grabbed me by the head, he tried to crush it like it was a watermelon but Jill shot him, he dropped me, then when I woke up, I actually had the headache from hell

That... Is amazing. Like Tron, but with Nemesis. It's weird hey, how in a dream is like you know what's going to happen and sometimes what's happening in the real world can affect it, like the pounding headache.

Damn, I’ve already posted it in this thread: I’m envious of people who may be scared of something like horror games or movies. It’s my favorite genre, but I’ll never get full emotions from it, and it’s really sad.

P.S. I regret you had the nightmare, though.

I always thought RE1 had a cheap horror b-movie feel to it. (Moreso the original than the remake but w/e)

Exactly why I've always loved the bad voice acting in RE1.

Apparently this was due to a number of factors:

A) they used people who were living in Tokyo. Some of the visual actors where picked up off the street whilst they were walking about, for instance.

B) Capcom had never recorded professional voice overs before and tried to do it all themselves, rather than bring in professional recording engineers.

C) There's no Japanese dub, do the sentences had to be simple English. English is taught across the Japanese curriculum, but how much Spanish does the average American high school graduate know.

D) The voice actors had no idea what they were working on, and where handed disjointed pages of the script.

Source: Itchy Tasty: An Unofficial History of Resident Evil. The author, Alex Aniel (aka cvxfreak) is a really nice guy too - I interviewed him about the book, last year. The book comprised of interviews he has had with folks with Shinji Mikami (whim he had dinner with, on his birthday).

Watch out it's a monster!

unlike resident evil 6 the movie

Aww they look so cute together.

It was that dang Shiba Inu all along

The first three and maybe 4 were b Movies but the newer games like RE2R,RE3R and RE7 all feel like big budget Hollywood films. I kinda like the cinematic tone.

Exactly. Resident Evil 7 was a pioneer in this regard, and I liked the tone it set for the next entries in the series.

I really liked the way it made me feel like I was in a cinema. Too bad they're arent any high budget horror films that are like RE7 and the remakes. RE7 kinda feels like a high budget version of Evil Dead or Texas Chainsaw Massacre. Funnily enough both of those movies got remakes but they weren't very good.

it explains all the times the roles were recast

It may be very unpopular opinion, but I love how Chris looked like in Resident Evil 7: it feels more authentic to his appearance in the very first Resident Evil, IMHO.

I preferred him in RE6....and I know a lot of people enjoyed RE7, but I absolutely hate 1st person games. It’s like controlling someone with no peripheral vision and the inability to look around using their neck.