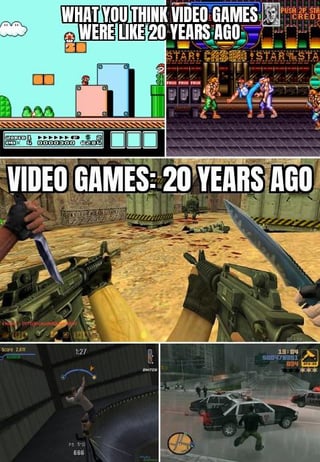 20 years ago: 3D first-person shooters and platformers coming into their own.

The leaps start feeling smaller because of diminishing returns, but still pretty impressive especially for those who've experienced it all.

The transition from 2D to 3D was the most significant in my view. It was cool to live through that change, and to see the ugly duckling phase of early 3D.

I'm really hoping VR takes off and we get another big leap, but none of the VR that I've tried has been more than a gimmick that's fun for about 1 hour, I want a world I can get lost in

And we're sure as hell due for another big leap: the leading MMO is 17 years old and we know how tired people are of re-releases of Skyrim and GTA5, yet most modern games are still a disappointment compared to those two

I played Wolfenstein 3D in 1992, so that's about when the world really started taking off.

My first home arcade game I played was Crater crawler on A2600 when I was about 4yo.

So it was more like this (discounting handhelds for the most part):

50 years ago: The Odyssey, Atari, among many other first generation handhelds like game n watch - basic lines and blocks, not much in the term of game memory at all.

30 years ago: SNES, Sega Genesis - Even higher quality sprites and memory capability not to mention much better music abilities - This gave way to the pseudo 3D games(Super FX is the name if interested) such as F-Zero, Donkey Kong, Star Fox, etc.

And conversely (or not?), if you compare games from now to 10 years ago or 10 years ago to 20 years ago, the leaps are not quite as great.

It's almost as if Moore's Law is actually tapering down or off, but I don't see that happening..

Numbers here are made up, but the general principal is right.

Unfortunately it feels like in the last 15 or so years developers have pretty much devoted 95% of the new computing power to graphics. It feels like I’m playing the same games over and over again just prettier.

The law of diminishing returns. It still blows my mind how fast computers graphics advanced in the 90s and early 2000s. Now games that are 5-6 years old look just as good as games today

It's amazing how much the power of your hardware needs to improve for software to make an impact now.

My understanding is that in terms of high end processors moores law isnt true anymore because they are already on the atomic scale and can't get any smaller.

The last 10 years have been rather stagnent due to the not so powerfull console hardware of the ps4 and xbone. Also, pc gamers got a taste for 1440p and 4k gaming, as well as 144fps and beyond. So a lot of the extra hardware power was soaked up by the demand for higher resolution and fps, leaving little room for devs to improve graphics.

And on top of that, we are in the transition between rasterisation and raytracing, so devs have to takle that shift first.

But if you go year by year it all lines up and makes sense.

My favorite game from that era is NFS:Most Wanted which came out in 2005.

Ive genuinely spent weeks worth of time playing that game in my childhood with friends. Unfortunately, I never could reach Blacklist 1. Maybe sometime in the future.

That game was fantastic. Getting your Beamer back lol that’s it that’s all you’re doing. By the time you got it you’d realize you own multiple cars that are better lol

Geez. I remember playing the precursor to NFS. Test Drive on Dos. That was almost 40 years ago lol.

Never had most wanted but NFSU was the shit

Believe it or not, we played NFS:MW in after-school child care, and we had to get one of the adults to race the final race, as none of us children could complete it.

I have most wanted pc version saved to my gcloud. Dm me and ill link you the download so you fufill your life long dreams.

My hands are all messed up, so you better drive brotha

I dont remember dual-wielding colt AR-15s and knifes in de_dust?

General Terroristi, you are a bold one

General Terroristi, you are a bold one

you're shorter than I expected

Halo came out that year too

Damn my DDII cartidge can legally drink and file taxes

That's super weird huh. Part of it is just getting older, but another I think is also we lived through a turn of century/turn of millennium period.

Like if you'd ask me "When was WW2" and I would give you a quick answer "Oh about 60 years or so ago" then when you actually think about it, it's more like 80 years ago. The vietnam vets are now the age of what we were used to of WW2 vets being. Which is just weird to think about.

homam = heroes of might and magic? never heard that acronym, usually it's "homm" 😛

No matter how old you get two decades ago was everything from your childhood and a decade ago was from your teenage/early twenties.

I'm really starting to get tired of internet memes telling me that I can't tell the difference between 20 years and 30 years..

We are further removed from the era Vice City was made than the era it portrayed when it came out.

I think this is a typical trigger for millennial self loathing and mid-life crisery... right?

Why is that guy stabbing his gun?

Who else is gonna stab it for him?

Fucking masterpiece of a game in every sense of the word.

The good old days when being a gamer was not yet socially acceptable.

Those are 40 years old now

I was twelve when I was your age!

Is this Heroes of Might and Magic? If so, it's the first time I see it written this way 🙂

Anyway, HoMMIII is the best shit ever