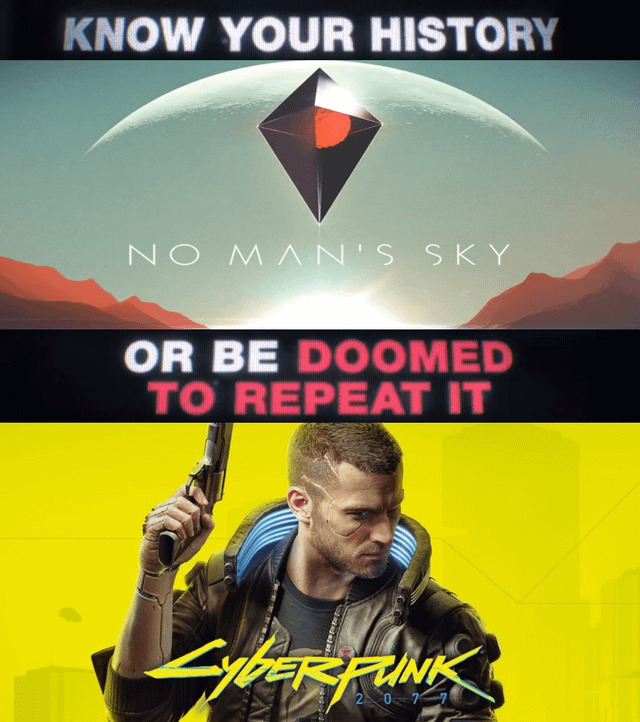 I think I'll try this game, once it's fixed and has all patches, updates, and dlc on the disc in a complete edition, similar to Witcher 3.

I've liked CP, but after doing most side Missions and completing the main story. I dont feel like "let's try another Charakter build and start all over"

I am hoping they take the no man's sky route and actually fiz the game.

Yeah. By this point I'm pretty sure the devs of no man's sky have added more features, than what they originally promised.

NMS has been fixed for years.

They've added a whole bunch od stuff now that they promised in the beginning and the game is good now.

That's literally what they're doing but people are still copy pasting the same argument. Then they keep complaining. Then when called up on it, they become aggressive, rude and impossible to talk to. Then they start saying some other games run fine without mentioning how other games needed updates and fixes. It's an ongoing, idiotic cycle.

Too early to say that's what they're doing. They've said they intend to continue supporting the game but they also said they wouldn't ship until the game was ready and we see how that turned out.

Thats what they've said they're doing but until it feels like a full finished game i have my doubts. Could end up like no mans sky, could end up like anthem, but either way your game should feel like a full game upon release even if you're planning on releasing updates for it and cyberpunk does not feel like that at all.

CD Projekt let gamers down and did a horrible mistake, people have the right to be pissed, it can't just be swiped because it will get better in the future.

I personnaly don't care about Cyberpunk.

But NMS has been giving us massive free updates.. the game is finally what they promised us. It's fucking great now

It’s also not great. I have played it recently and it’s still boring as hell.

Honestly, cyberpunk played better for me than any Bethesda game did at their start. I even tried to replay fallout 4 recently and it still crashes on me.

The core mechanics of Cyberpunk are just bad, from the minimap, to the driving, to the AI of the people compared to GTA, the choppy first player combat, the pointless skill tree, the choices that matter. No patch will ever fix the general mechanics of the game.

Cyberpunk is a nice game, but he had a release ahead of time. No man's sky had a bad development since the begin hahaha. But the time can heal everything.

Is it better yet?

What's wrong with the game? I'm 90+ hours in, finished the main story and only encountered one annoying bug. Otherwise, everything else is fine. I'm not super happy with the story pacing relative to the sidequests, but that's just a personal preference not something that needs fixed.

It's a really solid game. Not the best ever, but pretty good. Already.

im just sad about the whole RPG elements which seem to do absolutely nothing. the super weird scaling in weapon dmg and levels, the EXTREMELY underwhelming cybermods. the whole game was like "oh cyber enhancements" and you get like 2 choices for each slot for the entire game

yeah I get how you can see that. I’ve played the game, and personally I experienced a lot of bugs and frame drops. but honestly, the game wasn’t bad. It just wasn’t really what I expected. The game has a lot of unfinished content and it felt like a bunch of features were cut. There’s still a bunch of bugs and performance issues, and the ps4 version is near unplayable. It’s not terrible, but they hyped the game up way too much.

It has a few issues, but 90% of the people complaining haven't actually played it, or played it on console

Looking at the Steam review scores it is clear that Reddit is a hateful vocal minority.

There's neckbeards that patrol the Cyberpunk Subreddit just waiting to pounce on people expressing joy with the game.

I've played it on console and despite some bugs it's still great.

If you've got a good PC Cyberpunk is and has been an awesome game. Hence why it's got such a crap ton of playtime in steam charts.

However apparently it's like a whole other game on console. I hope that gets fixed. Confused me for a while - people talking about an empty game while I'm finding I only take my bike because traffic is usually too heavy for a car and trying to turn across a crosswalk involves waiting or run ing over a crowd of pedestrians. Then I saw videos of console play and it was just empty.

The game itself though is wild fun. 400 hours in and when it's got some DLC and more mods I'll be back for more.

I agree - I picked up on sale 20% off on my PC. Other than a few wonky bugs I've had very few issues. First playthrough was 70hrs, now I'm doing a completionist run.

I would not recommend this game for non PC play right now though (even if you could get it on the PS store). They should've released PC first then worked on a console port, the console release for base XB and PS was unacceptable. The patches so far have been great IMO.

I don’t think cyberpunk will ever be finished in terms of bugs and optimization. I feel like it would be easier to just develop a new game. Cut cp off. Didn’t work. Give owner a few goodies and a good discount for your next try.

Would 100% be more difficult to develop a new game

What did you play it on? I had a terrible experience on my Ps4 Pro. Even without the bugs, i dont feel it was anything special. Looked way cooler in the trailers than it ever felt to play.

Xbox one x. Had a few bugs but I just loaded a save quick. Nothing game hampering.

You must not have played a lot of games then

Oh well, got other hobbies and a job I guess.

The cyberpunk I played was outstanding.

Fuck yeah it was.

It's like these kids have never played a game before. They have bugs, its part of it. They always get smoother over time.

I love cyberpunk. Fantastic game. I waited until March to start playing on the Xbox series X. I’ve had barely any problems at all, and none that have been gamebreaking. Either they did a good job (fixing it) on next gen or people are just crybabies

You can't compare these two games.

NMS released super empty and lacking in features. They were able to add onto it over time.

CP77 isn't like that. It's inherently broken at the core, not to mention you'd need a complete fundamental overhaul of the branching storylines and some mechanics (AI, for example).

Many people have already played and finished the game. This isn't a sandbox, continuous online game like NMS. You experience it only once and that's it. Anything else after is just repetition and familiarity that no patch can fix beyond just the bugs/stability.

NMS also released pretty broken at the core. The initial bugs took the spotlight over the lack of features for the first few weeks after the game shipped, just like with CP2077.

I also see no reason why CDPR wouldn't be able to overhaul some mechanics or add content in the future. Sure, CP2077 is not a sandbox, but it's still got a massive world, full of places that can be filled with quests, interactions, exploration etc. As for branching storylines, that's probably not going to be changed, but who says our character's background/story won't be affected in the upcoming DLCs?

Two of my favorite games

Launched unfinished but now is a pretty fun gaming experience.

Literally all the updates were free updates lol. What do you mean?

You know every update has been free, right?

Nms free updates though.. it is the game they promised....finally... Only took em, what, 5 years?

The game released about 5 years ago, but it didn't take them 5 years to add the promised features. That was done by like their second or third major update. They've had a handful of major updates since then, and everything they've been adding now is just new features and QoL improvements.

The game is far beyond what they promised now.

Idk why people give a shit. Just be patient, it'll pop eventually.

Lol these are actually two of my favorite modern games. I guess I like broken shit? Shrugs

does cyberpunk let you turn off taa yet?