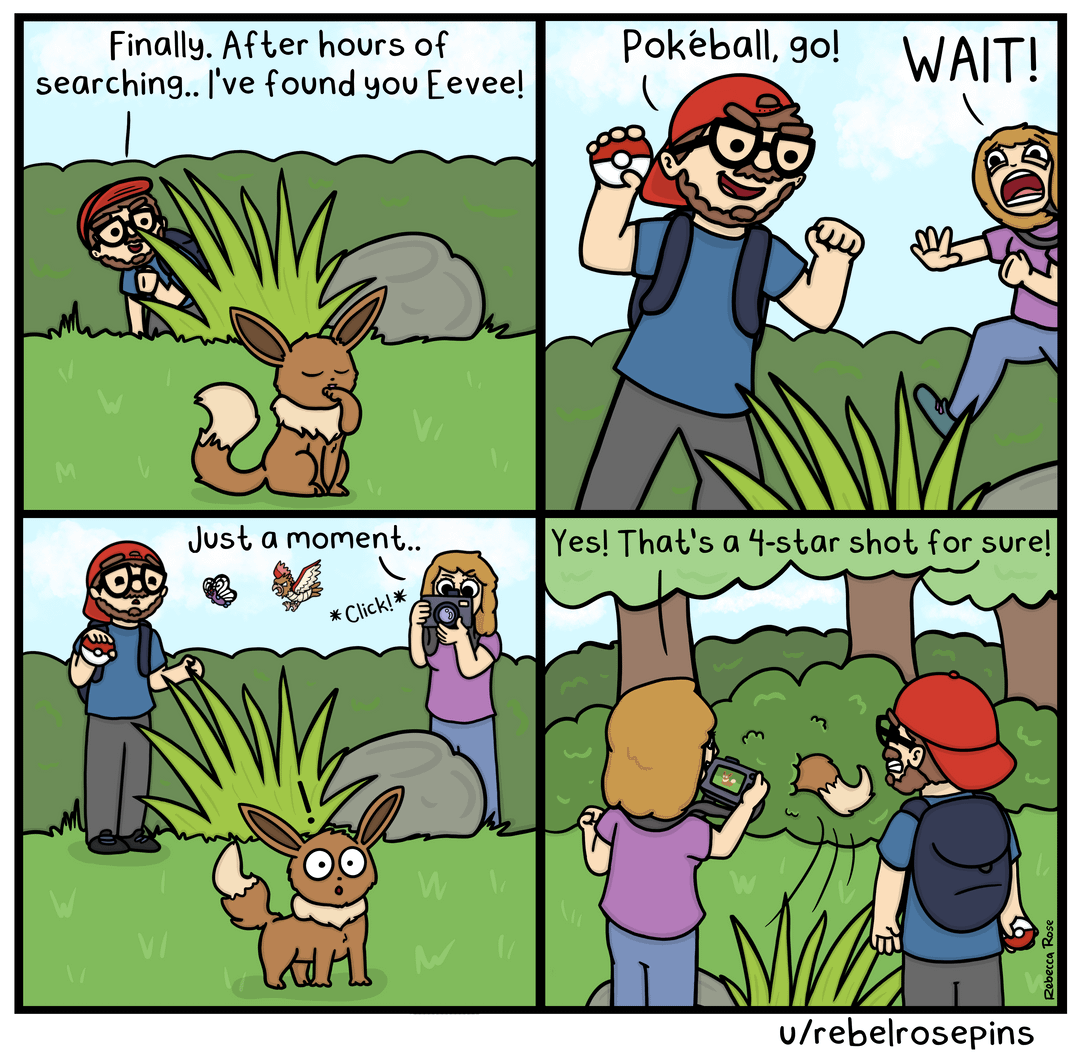 PokeInfluencers would definitely be a thing in the Pokemon universe. What annoying things would they do?

"I heard you're trading an Onix? Listen, if you give it to me, I'll shout you out on PokeGram, it'll be amazing exposure for you."

"Fine then, asshole! Your Onix is shit anyway, I can get a better Onix myself."

Where do I put my pokeballs in my bathing suit? Hehe I'll never tell!

In the pokemon universe its infinitely easier to remove those people from the world though.

I think it’s a reference to Pokémon snap rather than social media. However, the trainers are capturing Pokémon and making them fight.. influencers can’t be worse than that

Oh I know, but I could see this actually happening in a Pokemon universe, being similar to what an Influencer might do.

Sounds like you're a fan of this game, eh?

if you could fight as much as you want and it only takes 3 seconds in a magic machine to be back to 100% you probably would enjoy it too. Also serious injury doesn't exist as long as you stay away from main characters.

I bet they could. There would be plenty of streamers fighting or otherwise exploiting pokemon and they would giant assholes on top of it. If dickheads on the internet could come up with eating tide pods, knock out challenges, and braindead prank channels, they can come with something just as dumb that hurts pokemon instead of/in addition to people.

Probably give horrible Pokémon care advice. Like that Fennec Fox (a carnivore) owner who is making them go vegan. Or attack certain species, like all those who are against pitbulls.

That Eevee isn’t doing anything nearly interesting enough to get four stars. The display shows it up close, centered and facing front, though, so it probably will get a Diamond rating, but almost certainly only one star.

Definitely not a 4 star cause those are usually weird but I still have no concept of the difference between1, 2 and 3 sometimes.

I’d say, in general, 1-star photos are just pictures of Pokémon hanging out and doing whatever. 2-star is either specific animation that is very easy to spot that the Pokémon does on its own, or a very basic interaction that doesn’t yield any extra result like feeding the Pokémon an apple or bopping them in the face with it.

3-star photos are things that take a little bit more work with multiple steps or are animations that trigger for that specific Pokémon when you use the right item in the right spot.

And then 4-star photos tend to be one or two very specific events that the game wants you to find for each Pokémon.

Some of the confusion around it is that the amount of effort to get a 2, 3 or 4 star picture and how flashy each is can be inconsistent between different Pokémon, but it can also be a result of awkward timing resulting in you taking a picture right at the beginning or end of an animation loop, resulting in two pictures that look almost identical but have different star ratings because you took one of them just inside the “3-star action” window and one just outside of it, and especially if you don’t have two consecutive photos to compare, this will sometimes give you a photo that looks like it should be 1-star that winds up being 2 or 3 because the Pokémon was about to start, or just finished, an animation that you didn’t notice, or photos that look like they should be multiple stars that only give you 1 because you just missed getting the timing right.

Have you not played the game? You get 4 stars for inexplicable shit all the time. I've got a four star of a guy that's not even in the picture. I think he must be behind something. I've also got 4 stars of some pokemon randomly flying half a mile away, and others that just seem to be sitting there doing absolutely nothing. Meanwhile, I've got pokemon lit up with electricity or lighting or roaring so much the screen shakes and it's 1 star.

You’re just describing capturing a 4-star animation so badly that you can’t tell what the animation is. That certainly happens all the time.

But if something is just sitting there not doing anything front and center in the screen, that’s not going to be a 4-star photo.

Now I want an MMO with a world economy based on pokemon. Would have trainers battling for food money, and photographers stalking them for battle pics or interactions like the comic. Marketplace for trading the best pics, allow ingame photo editing for even more fun. Could have a pokemon collectors market in the auction house, making a job for people looking to just catch em all.

Have server-based Pokemon Champions, with a limit of people per server so almost everyone has a chance. No EV and IV BS.

Start with the OG pokemon and OG region. DLC for each additional land over the course of a decade.

Your welcome GameFreak, I will take a job anytime you want for minimum wage.

Dat Pidgeotto chasin' his lunch in the background tho

To be fair, in this position it does look a bit like Pidgeotto from a distance

Yep that camera would be going straight up her butt.

Are you a doctor?

No, but if she pays out of pocket, I guess we can take a few shots while it's in there.