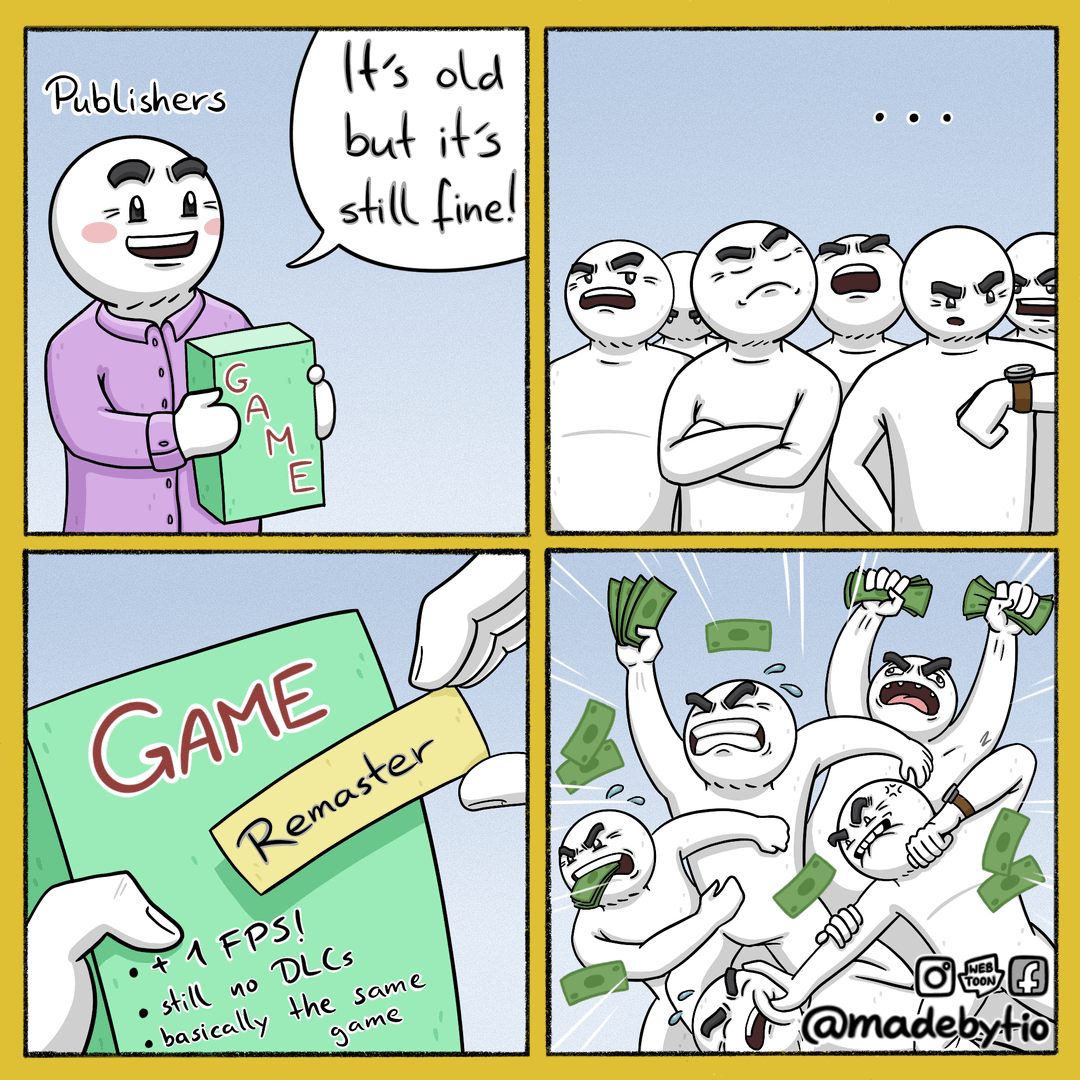 Tbh there's alot of old games I'd buy again If I could find the original versions n had the original consoles to play them on. So when they "remaster" a game it just removes a few steps for me. Lol

Getting old games to install and run flawlessly on Windows 10 is very difficult and sometimes impossible. I will gladly pay for a remaster that will work right out of the box on modern hardware.

I literally play most of my original games and CDs on Linux under Wine because it's actually easier than to get them to work on Windows.

cough cough KOTOR 2 cough cough seriously though ive been trying to gey kotor to work on windows 10 for years all the "fixes" only ever work for a couple hours, i know its impossible to get a remaster of kotor 2 but i would pay a large amount to be able to relive that fantastic game again

Yeah. Nocturne SMT for example, not many people still have ps2s to play it.

Well in nocturne's case they're actually adding stuff to it. Like voice acting.

Just give me the exact same game but I can play it on my newer console, that game was perfect

Also, people like supporting companies that make great games and products. Why should anyone else care if I want to spend my money on "essentially the same product" I've played before? I like having all my games in one place and not having to dig up old systems just to replay them hoping they still work and that the controllers aren't busted and janky.

Gamers would freak out at the amount of time I’ve bought the same book in different collector editions, or because I can’t find my last copy, or to also have on kindle, etc. It’s so weird how people act like they are compelled to buy it. Just don’t buy the game if you don’t want to, seems pretty easy.

Plus you get creature comforts like cloud saves, achievements.

Also there are games some of us might've... borrowed when we were younger and strapped for money. Now it's a good chance to pay back the dues on these ;).

Seriously any day they want to “remaster” Portal 1 & 2 and toss them on modern consoles i’d gladly pay $60 to sit on the couch and play them with my partner.

It’s ridiculous that they don’t exist on ps4/5.

This is just one reason I keep all my old consoles and games. I can go back and play whatever I'd like and I don't need to pay twice for a game.

Wait what. When did that happen, ive been waiting for a long time

They just released a “remaster” of BG: Dark Alliance 1. No online play and I think local co-op is bugged right now. It’s $30.

I was gonna wait for the price to go down.... buuuuut that nostalgia, tho.

I mean you're kind of forgetting the fact that a lot of older games get locked to older hardware if they're console exclusives.

If they didn't port or remaster certain games, they'd just be lost to time, unable for anyone to play them again if they're not on PC.

If the games aren't on PC, then we just do emulation like we always do.

There's always that, but if a developer is willing to put in a bit of effort and release it at a reasonable price, I'd rather go that route.

Sometimes I just want the same game with better graphics and minor quality of life updates. Look I'm not going to bust out my 360, listen to the lawnmower fan blow, just to play mass effect again. I'd be more than happy to just buy it with better graphics on the new console.

Is that true of every remaster? No, but they really only seem to be remastering either cult classics or really popular games. I have no problem.

Look I'm not going to bust out my 360, listen to the lawnmower fan blow, just to play mass effect again.

This is a big reason the newer Xbox console platform is so nice, though. A huge amount of 360 games are disc backwards compatible now, at 4k with both Auto HDR and often FPS increases.

All the 360 versions of the Mass Effect games are pretty decently playable on back-compat for those who don't want to buy the new version.

I've got a huge 360 library and it's nice being able to play a lot of the games without further purchase, some minor to major upgrades (depending on the game, some look fantastic others look basically the same) and never have to hook up my 360 again.

Yep. I dont even have my 360 anymore. They go on sale on PC but not the DLCs. Much cheaper to buy the legendary edition.

To be fair, a Remaster is essentially just a glorified port of the exact same game with the exact same engine and source code but with minor enhancements.

I think the problem is that people confuse “Remaster” and “Remake” with one another, if not think they’re one in the same when they are two VERY different things.

Of course there are exceptions such as BluePoint Remakes (Shadow of the Colossus and Demon’s Souls) where the devs use the source code of the original and do a complete graphical overhaul with modern hardware while still retaining the original gameplay mechanics with minor tweaks. The game is almost exactly if not exactly the same as the original but the graphical fidelity was remade from the ground up

Where would Mass Effect Legendary fall under? Because with ME1 specifically it looks like they redid a lot of the game.

I grabbed MEL because they threw in all the DLCs too, many of which I never bought before.

Generally speaking, it's mostly just a (very welcome) facelift, and they did a lot of QoL updates: ME1 inventory is easier to clean up, Mako handles better, a lot of guns have been tweaked (along with accuracy being less ridiculous). They also made it so certain DLCs now only pop in at an appropriate time, rather than it throwing something that should be played late in the story right at you from the start.

The real benefit is that it's the price of one game for all three along with all DLC (except Pinnacle Station, to the sadness of no one). And no ME3 MP, which I'm legitimately salty about.

If you've never played the trilogy before, or you're primarily a console gamer and want to experience it again with a nice sheen, it's not a bad deal. If you're a PC gamer with a high end system and you already own all of it... can't see much of a reason to buy it.

I snagged it because I've been wanting to play through again (and introduce my wife) for a while now, but between a house fire and a pair of cross country moves, my discs are mostly MIA. Haven't looked back.

ME1 is pretty much straddling the line; it's definitely not a full remake, but it also goes way beyond a standard remaster too.

Here’s the thing: I don’t necessarily need new graphics or a new engine or anything, AI just need it to run. I don’t own a PS2 anymore for example so if they remaster PS2 games that I want you can bet your ass I’m buying that shit for PS4. Nothing needs to change but it runs, that’s enough.

Dude, the PS1 game graphics give me a headache now days. I was dying for that Spyro remake.

Well yea but the Spyro remaster was awesome. All 3 games, one price, with updated graphics. Totally worth it. Same with the crash remaster. You also have remasters like AoE2 DE, and remakes like FF7 remake that are all doing it right imo.

The selling point of those otherwise useless remasters is that you don't have to drag your PS2 out to play Sly Cooper. You're paying to use an old product but on hardware it wasn't made for and actually wholly doesn't work on; or if you never played it, to not have to also buy a PS2 just to play a game.

That said, the days of "hardware it wasn't made for" are basically over. Here on out, it's 100% money grabs.

I bought Mass Effect Legendary Edition and have zero regrets. For one thing, now I can play all of them on my PC instead of having to dig my old XBox 360 out of storage. Better yet, the annoyingly long load times are gone now - no more staring at Shepard waiting patiently in elevators for 20 seconds.

Yes but then you get ME:LE with every DLC. (they could find)

Fuck pinnacle station anyways. Some of the time trials were pretty much luck based anyways.

Honestly lol I could care less.

If they squash the worst bugs and make shit better I'm ok with it.

Basically, as long as they don't do what bethesda does with Skyrim.

The legend of Dragoon

Why do people care about this?

Complain all ya want I was very happy to finally be able to play mario sunshine again without busting out a crt. Not every remaster has to be groundbreaking.

Yeah a lot of the time remastered games are just "Here's a classic game you loved but now it runs on modern hardware with a modern resolution." For some games it isn't really necessary, but there are plenty of games that have basically become inaccessible and having those remastered is great.

One example that I've seen recently is Fable Anniversary. Fable Lost Chapters was released on PC but for some inexplicable reason it didn't have native gamepad support - you had to play using keyboard and mouse (you could use software to convert gamepad inputs to key inputs, but that didn't update the in-game UI at all). The remaster was released with full gamepad support, upscaled textures, and upscaled UI. It's the same game except it works so much easier and it looks a bit better without being a full remake.

Honestly, the Mass Effect remaster is highly enjoyable and I was very much looking forward to it.

Zelda Skyward Sword is an absolute joke though. Nintendo are greedy, and not worth my money.

If done well they can be great, but lots of them give me lazy money-farm vibes.