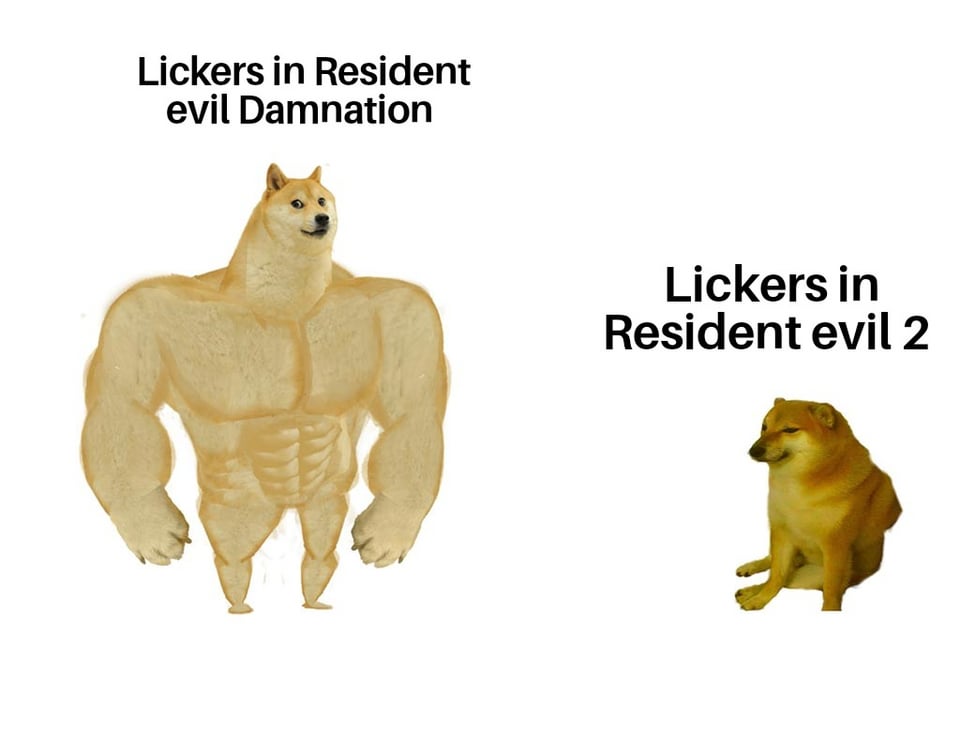 Just thinking, the lickers of RE2 don't have a hive mind to controlling them, turning in just Savage beasts, and the damnation have the Second work of umbrella B.O.W plans that were put controlling mechanisms in the creatures.

I have a great game recommendation for you

That one sucks, play Resident evil 2 instead

The Licker is a human mutant infected with the t-Virus of which a considerable number were documented in Raccoon City in 1998. It is something that emerged naturally rather than a B.O.W., but because its mobility and aggression were exemplary together, an attempt was made in TRICELL's laboratory to develop a bioweapon based on it, and the improvement was named β. But although it was injected with the Progenitor Virus, it seems the result was not as improved as expected and only sense of smell and reproductive ability were enhanced."

The Licker, nasty little bugger. This mutation could take an infected host and turn them into a highly lethal predator. Incredibly fast, able to leap to great heights and distance. Because of its bone structure, it moves on all fours, covering ground much more quickly. It has talons that it can use to scale structures and hang from ceilings. This means that it is able to surprise attack from almost anywhere. One thing you must watch out for is the tongue. There are reports, although I have not seen it myself, that the Licker's tongue is capable of decapitating a man. I told you that it is capable of surprise attacks, but there are a couple of things that can save you from an attack. Being blind, the Lickers cannot hunt by sight. To compensate, they have highly developed sense of hearing. Your own sense of hearing can help you avoid a surprise attack. Because of the way they move, you can often hear the scraping sounds of their claws and the flesh of their bodies moving against the surfaces of where they're climbing. They're also known to make a very distinct hissing sound. If you do manage to kill one, they may emit a high-pitched scream. This is most likely to alert others to their location"

Basically Damnation licker > Re5 licker >= Re2 licker, in terms of combat and effectiveness, in the movie they look stronger as they kill a lot of soldiers easily (ie RE2 lickers look weak because they don't have feats). we also can't forget that many parts of the movie the lickers were being controlled by a human which made them look even more impressive. furthermore the damnation lickers were infected with Las plagas which is said to increase the capabilities of the infected.

Different types of Lickers. In fact, the ones from Damnation are the same from ResEvil 5 minus the exposed heart

Aren't Damnation lickers Plaga-enhanced ones? As far as I remember, RE 5 ones aren't.

Looks like they got into Chris’s steroids he kept at the RCPD.

Are lickers humans who got infected by the tvirus? Or were they just experimental creatures from the start?

If I’m not wrong, they are the next phase of the T-Virus, after Crimson Heads.

So they were once human?

I wonder how lickers from RE5 would fit in that comparison.

Get rid of the stupid ass meme dog.