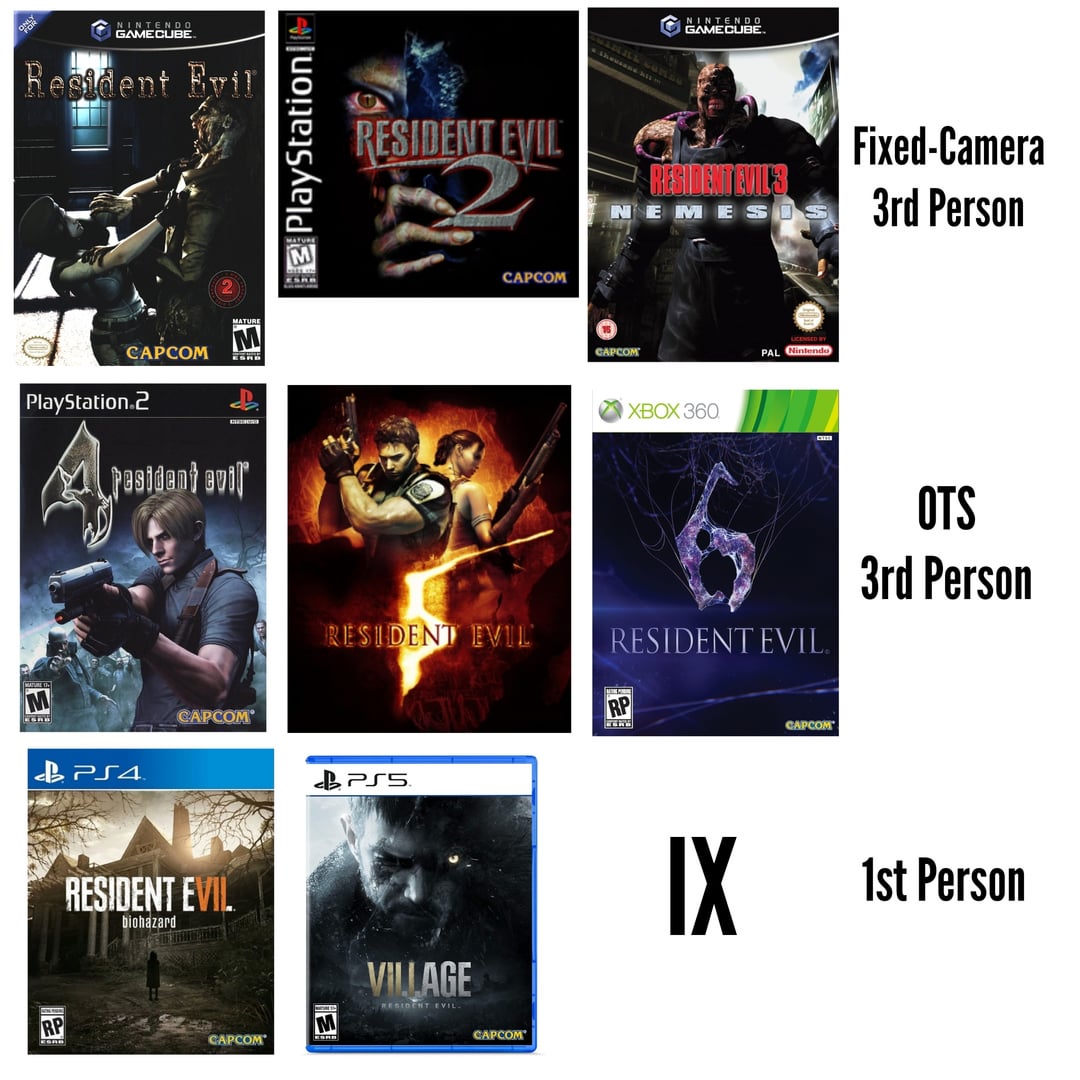 All the pieces are here, folks.

I would play a RE Kart or Capcom Kart.

Imagine RE10’s the final one and it incorporates everything perfectly from survival horror with fixed cameras and first person that transitions slowly to an OTS action game, since the survival horror formula has you start from weak and ends you off with multiple guns and ease to plow through enemies. Call it something like Resident Evil: E(x)tinction or something cheesy.

That's exactly what RE6 tried and it's one of the worst games I've ever played. That said, I appreciate some of their attempts in that game, but certainly not all of them lmao. I want to say I would like to see them try that format again but I just hate RE6 so much that I don't know if I can say that with a straight face

RE6 biggest problem is the ridiculous set pieces. RE2 Remake had the perfect balance of action and horror. If RE6 was all like that, it would have been much better received.

Yeah, six was really hard to just power through, though i did enjoy Jakes campaign and the mercenaries mode was pretty fun, that being said it’s an alright game but a pretty bad RE one.

Man I hope it isn’t open world. Every game now is a so called open world and I’m just tired of it

Open world and horror don’t really go together. The Evil Within 2 somehow managed to have an open world component and still be terrifying and pretty good but I can’t see it continuing to be a thing

Evil Within 2's open sections felt like yiu were waging guerilla warfare on the enemies. Having to sneak around all the time and silence them one by one. It was great

Evil Within 2 was such an unexpected treasure. I loved the first one and when I heard the changes they’d added to the second I panicked, but still bought it anyway… I was so glad I did. The open world was awesome, especially when the ghost woman randomly shows up to stalk you.

I thought they did it as well as it could have been done, but you can miss a lot of stuff. It's my gripe with rdr2 also.

Yea that was very controlled open world, an elder scrolls style open world would feel odd. Then again I’m sure it could be done. They say Deadly Premonition is a masterpiece lol

I feel the same sentiment. Especially because the worlds are always "extra extra large" but empy.

It pains me that I can’t remember which youtuber said it, but now that I think of it it might’ve been multiple. Village should’ve allowed us to choose the order of which lord we take down first, with slight differences in the various paths. It wouldn’t have been open world, but it would’ve felt similar to it. Like we had more freedom. It had a perfect frame for them to do that. Would’ve been amazing.

Hell yeah. Let’s go to the factory with the starter pistol and a sawed off shotgun.

Lmao obviously it would have to be structured differently, making enemies less aggressive and lower health in the first area and increase in time. If they pulled off the dynamic difficulty in RE4 as perfectly as they did they could do something like this.

Strategy game where you train rookies to be S.T.A.R.S/BSAA/Umbrella staff members and defend iconic places like RPD with your defensive units, while looking for a cure/info about different viruses with your researchers.

If it has to be a different genre than they’ve done before, metroidvania could be cool. Most of the games already incorporate elements of the genre, it could be interesting to see them lean more heavily into that.

Yeah I was going to say RE already is metroidvania and always has been.

Most of them definitely share some blood but I would argue the way they implement metroidvania mechanics is usually more similar to point and click adventures. It’s a thin line and further discussion could easily change my mind as the definition of either genre is sort of vague anyway, but my initial thinking is that, while your progress in RE is often gated by the need for an item you don’t have, that item usually doesn’t remain useful after you use it once for its intended purpose (though there are exceptions).

I guess key/cards and guns would be the most consistent exceptions, but keys don’t feel the same as getting an item with a new use and “this hidden gun would make these enemies easier but you don’t need it” isn’t quite the same as “you need the assault rifle here because this enemy regenerates too quickly to kill without it.” Then I guess it gets complicated with “how do they make sure you have enough of a specific kind of ammo while still feeling like survival horror?” but they do already have to work that kind of thing out anyway when making sure you’re not bereft of ammo right before bosses or big waves of enemies. Practically speaking, the leech monsters in Zero do require molotovs to kill if you don’t want to burn through an absurd amount of ammo, but it’s not like there are areas blocked by leech monsters you can’t really access until you learn how to make molotovs and suddenly all those areas become available to you. Same with the regenerators in RE4 with the heat scoped rifle, but that game is too linear to fit the bill. In Monkey Island, however, after you use an item to progress, you usually discard it

At this point I’m sort of just thinking out loud. With the leech example in mind, it could be cool to lean more into the Metroidvania side of things by learning new abilities (like how to craft molotovs) or even through items that remain useful after you use them once (so more like the lighter in CV and less like the tractor jack in RE8). Of course this would have to be balanced with how your inventory is managed, but they’re always playing with that system anyway.

None of this is meant as a criticism of how RE does things now—I adore the series for what it already is—but if it were going to try to focus more on a genre it usually only dips its toes in, I feel like that could be an interesting experiment.

I'm down for open world RE. I'm also down for a return to fixed cameras and prerendered backgrounds. Maybe a side series in that style.

I really want to see them do an original story that plays like the 2 and 3 remakes, so over the shoulder third person shooter with a puzzle filled enclosed space to explore.

Third person in umbrella lab buried in a deciduous forest during autumn. Castle mansion on top. Would be cool to play as someone from the lab, not having to tie in some character from another game. This is my dream but I know it won't happen. Re2make should have set the new formula. Fuck it. I hope the next resident evil has dinosaurs.

I've always thought RE x Dead Rising would be cool, but I never thought about RE x Ace Attorney

It'll be an isometric squad based real times tactics game.

Okay but honestly wouldn't that be a neat idea?

I think it'd be awesome but probably has more potential as a spin-off, seeing as it's not quite as marketable as "action-adventure", which as I understand is the reason RE broke away from fixed camera angles

Yeah, I'm thinking a spinoff where you either control a team of UBCS or BSAA in various situations where you equip them all differently and there's status effects and limb damage.

You heard of REmake, get ready for

I would love for the next game to focus on Ada. A spy action game, like Metal Gear, only not shit like her levels in RE6. She’s one of RE’s most interesting characters, and she’s been hinted to suffer from depression or imposter syndrome. Now that her and Leon are older a game focusing on her would be even more interesting, since now she’d have to deal with the fact she wasted her life doing generally immoral things. Maybe the plot would be Ada goes a bit too far with one of her schemes, and someone is sent in by the US government to hunt her down - only to find out that person is Leon.

It would be interesting if the game had decision based outcomes, kinda like RE7 (only executed better). Like maybe Ada can choose to be a good person and help save people, or you can choose to infect people/yourself with different viruses to build power. It could add some moral issues to the endings too - like maybe if you choose the evil path, you could have an ending where Leon and Ada get together, but you have to willingly lie to Leon about your role in the events of the game.

They tried to do the whole “Ada’s past coming back to haunt her” storyline in RE6 but it fell flat because none of the events in the game where even Ada’s fault, it was Simmons and Carla

I would love a return to the fixed camera perspective again.

Most of the modern generation of gamers wouldn't be able to play it. I recommended REmake to all of my casual RE fan friends and they all ended up returning it and said it's "unplayable".

Medium tried it out as a next Gen fixed camera game and it was awful.

An open world RE game would be horrible

Probably just circle back around and go back to fixed camera third person.

Hoping they go back to over the shoulder personally. I get that 7 and 8 needed to be first-person, but we've already seen what Rose looks like so there's no reason it can't be OTS (assuming she'll be the protagonist). I don't think it'll be open world per se, but it will probably have a central hub with sections that can be played in any order, unlike Village which was pretty linear.