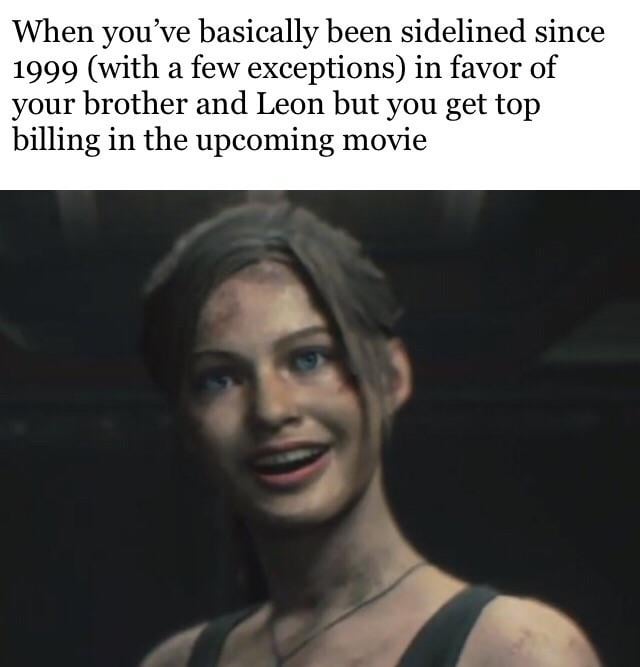 If I had to assume any one thing, it will be at least 200% better than the Anderson films. I say at least because it’s not hard to surpass those films but I’m a bit optimistic since they seem to be telling the story of RE1 and 2 almost to the letter.

Yea but how do u retell two stories that have basically no connection without making it worse...I have little faith with what they're doing or certain changes, but I think we all hope it works out.

How can they be telling re1 and re2 to the letter in one movie?

I'm sceptical. Videogame adaptations have never been done well, and the casting doesn't fill me with confidence that they're not just going to mess with the story.

Add to that, that we've had one underwhelming movie already this year, and that the TV series they've teased looks like "Resident evil: The teenage highscool drama".

This speaks to me that Capcom retain little to no creative control over their IP when making movies.

Sonic the Hedgehog was pretty good

My queen of civilian resiliency towards bioterrorism deserves a new game, a movie, a TV show, a clothing brand, and a fragrance line named after her.

Is it bad for it to be three months from release and still no trailer?

Not really. Nowadays it's become more common for trailers to drop pretty late

Yeah Godzilla vs Kong, Mortal Kombat, Spider-man.....all had/have almost no footage released until the final months before rralease. I like it, so now there isn't counties videos picking apart every scrap of footage for a year ruining the movie.

I think movie businesses are being very careful with COVID at the moment, and seeing how things play out before they decide to give a release date and ramp up marketing in general. It’s still wasted money if they market and have to delay.

You should be glad. You know it's gonna spoil the third acts best scenes

Hold up, my girl has top billing?

Yep! Claire’s at the top, followed by Chris, Jill, and Leon in that order.

How does this work? Jill can't be at the mansion and in Racoon City at the same time.

She actually won in the sense that the actress at least looks like her unlike Leon and Jill.

Didn’t Mark Hamill get top billing in Force Awakens? The actress that’s playing her seems to be the most prominent actor in the film so that could be why she gets top billing. Hope she gets the limelight though.

Which one we taking about? Welcome to Racoon City or the live Action with Lance Reddick as Wesker and a Charlie's angel actress?

I'm excited to watch her get more screen time than Leon. How the tables have turned. It's the one thing I'll thank the writer for.

I'd want more screen time for Leon only if it's the resident evil 4 cheesy dialogue Leon.

Hows the most popular characte

It cracks me up a little that people still hold hope that these live action adaptations will be any good than before. They make the animated CGI films look gold by comparison and those are subpar at best maybe beside Damnation which was decent.

Can’t wait to see how Kaya Scodelario does in a more action based role. She’s gonna nail the horror part easily, so I’m interested to see how she’s gonna play the badass part of Claire as well.

She was great in Crawl, a movie that damn near gave me an anxiety attack while watching

The sad thing about RE games are many characters only appear in one game and never again. Claire is quite lucky, she's in 3 (4 if you count remake) but kinda underwhelming since her brother has had a lot more appearances.

Remake Claire is so cute

I don't understand how Claire can be so underrated between the protagonists. Name one RE main character that did more amazing things that she did, and I'm not only talking about the older games/remakes. Just look at revelations 2, she's even more of a hero than Chris and Jill, and Leon is just a broken dude barely hanging onto his sanity through being a smooth funny guy and low-key my favorite male character ever

I don't see how she's underrated. The fans like her. She's had three games.

I think the animated movies (Degeneration & Infinite Darkness) really did a poor job showing her doing anything relevant.

Jill: Took down the Nemesis

Leon: Rescued the president's daughter while taking down a cult.

Can't wait for the live action movie where she'll probably get captured again and then Chris, Leon, and Jill have to team up and save her!

I don't want to hate on Claire, but it seems like Capcom really likes having her be a damsel in distress, or Leon's sidekick.

...shit, now that you've pointed that out, it makes sense lmfao

She's more an investigator type of character though.
The others have a lot more combat experience, but she's a "find the truth" kind of character.
I mean, she still claps Birkin's cheeks, and can handle herself, I think (character wise) she keeps getting captured, because she is too focused on finding out what's going on.

If it's like the recently released animated film then she'll just be bound to an invisible chair again. Not looking forward to it at all.

This movie has nothing to do with capcom's writers. I believe Claire WILL get the most spotlight.

I’m sorry for this comment section, OP. RE fans think that games released twenty years ago weigh anything in the discussion about characters getting sidelined... and your post clearly states “(with a few exceptions)”, so everyone bringing up the aforementioned games is looking dumb. I hate this subreddit more with each passing day.

To be fair, as much as I do enjoy looking at her and like her character, she was a civilian, it wouldn't make sense for her to go seek out more zombie attacks and be in other games. The sane response to what she went through in RE2 is to stay the fuck away from BOWs and try to love a normal life.

Chris and Jill joining the BSAA makes sense, they were in stars and I believe had prior military training and experience, and they both obviously feel the need to be heroes otherwise they wouldn't have been military or STARS.

I will admit Leon jumping from rookie cop who survived a national nightmare to secret service agent dispatched by himself to rescue the president's daughter is a bit far fetched too though, but it's definitely the kind of job he'd have sought out and was at least somewhat qualified for it already.

Claire was just a civilian who wouldn't have been scouted by any of those agencies, and wouldn't have the motivation, or at least qualifications on paper to suddenly join those agencies. anything else with her would have felt kinda forced or fanservice-y unless they were going to go full on national zombie apocalypse where anyone can get attacked after re3, instead of the more unique concept of isolated incidents of BOW outbreaks that they chose to go with.

She could've easily shown up in the shit show that was RE6 though with all the stuff going on in that game.

Thought you were talking about that apparently shitty CG Netflix thing for a second and was about to write I hate to tell you...

When will the trailer release?

Dont forget revelations 2, claire was in it

So then they retconned her death or it's before her death because she's labeled as having died off screen in 6?

I REALLY want one good RE film. It has so much potential to be good

Just give me my Code Veronica remake pleeeeeease.

"Claire's basically been sidelined since 1999!

Ah yes. The old "name a movie starring a black actor besides Will Smith" argument. Aka the "if you ignore all the examples that prove me wrong, I'm totally right!" argument.

Better to stay sidelined, than had anything to do in RE5 and RE6.

Just imagine RE5 with Claire and no Sheva, then exhale happily ever after

RE6 needs holy water, tho

"What a woman gets top billing?! This is a feminist propaganda!"

The new live action movie. It has nothing to do with the Anderson movies.

Hype for this movie is immense. Set photos already look miles better than anything the Mila films did.

This is about the Live Action?

Hold up, what did I miss? Movie?

Just type in "Welcome To Raccoon City" on Google

Which movie are we talking about here?

We have sequel to Infinite Darkness?

A new live action movie (don't worry, it doesn't have anything to do with the Anderson ones)

Just type in "Welcome To Raccoon City" on Google

Hey, at least she got to share it with Barry in Revelations 2

I want to see her so bad but also it's another example of a 30 year old playing a teenager so... Sigh. Still gonna watch it though

Plus, a decent casting choice(s) in live action.

One thing I’m excited for is Claire’s casting. Kaya Scoledario is a serious actress, and she can pass as a real world Claire.

You would think that the sister of Resident Evil’s first protagonist would have a lot of attention.