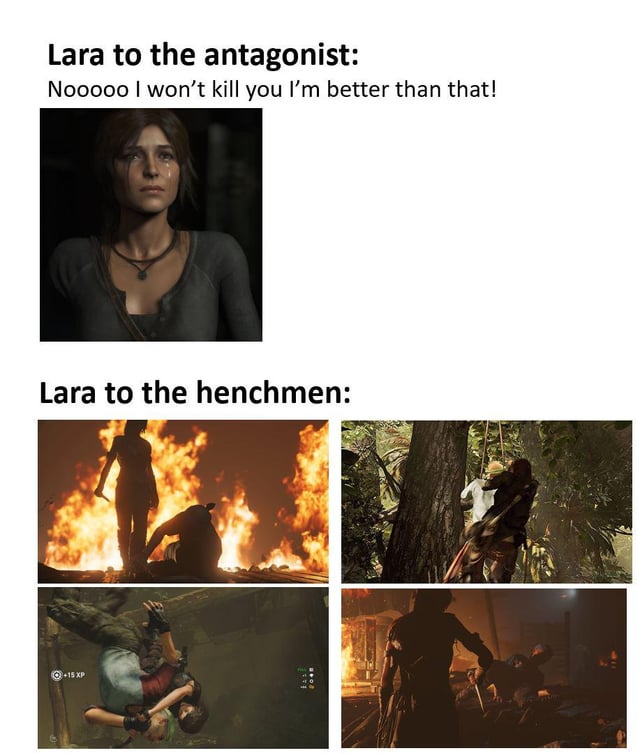 In the credits: “Nobody important got hurt in the duration of this game”

except for the game developers *allegedly

Going entirely by memory, but I think Farcry 3 did this well. Your character starts a bit panicky from the killing but then starts to get more used to it until you become highly proficient at it.

Tomb raider 2013 tried to do this as well but failed miserably. She freaks out at her first kills and starts hyperventilating, then two seconds later she kills so many without a flinch.

I didn't think it failed at all. The first kill she was emotional, and the shootout right after she had difficulty shooting, swaying and everything. It's after that that she has a conversation about having killed people and how it felt easy to her. I think you're meant to view her emotional reaction as being afraid of herself more than being distraught at having killed someone.

I liked how the animations change over time, with a lot of the skills being quicker way to stealth kill, and finisher moves. Combined with how Lara gets bloodier and bloodier as time passes, I felt it showed well how she becomes a merciless killer.

The trilogy exemplifies this even more, when you compare the first game where she looks out of her depths all the time, getting hurt and ambushed by her ennemies, to the third one where she is hunting people and they're all terrified of her (in that game, the skills you gain are scare tactics like hanging people from a tree).

Sure, it probably could have been better, and maybe the devs could do the first game better now with their experience, but I definitely don't think it went as far as failing miserably.

I remember she mentions to Ross(?) that she had to kill somebody, and he says to her that must've been difficult and she answers : "I'm surprised by how easy it was."

I'm mostly remembering this from the top of my head and I played it a long time ago but, the first "kill" of the game is that one dude that rescued her and then tied her up. I don't remember the hyperventilating thing you mention.

I mean, that's kind of a simplified version but that's apparently not inaccurate. Everything I've read about killers is that the first one is always messy and horrible and it gets way easier after you've passed that moral threshold.

Ghost of Tsushima kind of does this, but only for stealth kills.

Early on your stealth kills are slow, loud, and messy. As you level up your skills the animations change to be faster and quieter until you're murder Batman.

I want this to be ported to the PC more than anything else.

Farcry 3 was absolutely fantastic! Maybe the only first person shooter storyline that actually had me truly hooked.

I didn't like how irrelevant Vaas ended up being, and how bad the fights against him were. But the transition of the main character from scared white kid into genocide king of the jungle made up for it. It was very well executed. No wonder why the sequels tried to copy it.

I especially loved how even your friends point it out near the end, how you've changed, you're quiet all the time, you've killed so many people, and how you're a borderline monster yourself now because of it and they're kind of afraid of you.

This is a hypocrisy that is pervasive in a lot of fiction. The hero murders their way to the top, killing mostly employees, but the big boss gets a moral pass. It's just more elitism. "Kill the soldier, jail the politician"

The DVD for Austin Powers has an extra scene in the specials where the henchman's family that gets run over by the steam roller gets called to let them know he died on the job.

That is one of the only movies I can think of that just gets funnier and funnier the older I get.

Now I want a scene where the hero is going to give them a pass and another character kills the bad guy with a line about the hero having just killed a building full of people.

EDIT: Thanks all for the great examples!

didn't Deadpool 2 do this or something very similar

It's pervasive IRL as well.

It's called Ludonarrative dissonance. The narrative is in conflict with gameplay.

A bit off topic, but I love when games have this mechanic. Hearing and seeing the minions acknowledge your arrival, and react accordingly to your level of death-bringing is so damn satisfying. It makes you really feel like you inhabit that character.

As opposed to games like Skyrim where I will be head to toe in Daedric armor with a sword that is literally on fire, then some bandit jumps out from behind a rock with a dagger and tries to rob me.

It's Payne! Whack him!

Ghost of Tsushima has a mechanic somewhat similar to this. If you get a kill streak or kill a tougher enemy, you have a chance to "terrify" your enemies at which point they drop their weapons/fall to the ground/run away.

This is why I love Ghost of Tsushima.

The Grunts are actually partnered with Elites because of a treaty made during the Grunt rebellion. They used to be cannon fodder in the most literal sense, not even armed. Eventually they got sick of their second-class treatment and coordinated a Rebellion that threatened to end the covenant until the arbiter of the time made peace with them, choosing to train, arm, and integrate them into previously Elite-only units.

thats when they stop fighting, but when the fight initiates they have voicelines like "demon!! demon!!". they will still fight back until you kill their big homies

I mean, my brain jumped to her screaming at the top of her lungs will sprinting through a compound, "I WILL KILL YOU ALL"...

That's the charm of the rebooted Tomb Raider games.

Playing the games watching Lara act like an innocent damsel in distress trying to survive in a scary and dangerous world... During the cutscenes. As when the gameplay starts she would make Jason Bourne and John McClane jealous of her accomplishments.

Ah the good ol' Ludonarrative dissonance. The Uncharted games are also famous for that. In cutscenes the lovable rouge, while during gameplay killing hundreds of people without even flinching...

whispers "that was your neck." to the badguy.

True, the only one she doesn't kill nor want to is Ana, because they had a close relationship before discovering she is evil.

At best, she tried to bring Dominguez to his senses due to respect for Unuratu, but she still killed him without any real remorse when there was nothing else left to do.

This is wrong. Lara killed all the antagonists and never cried about it. She never undergoes any moral dilemma in the reboots, except in Shadow when she cries to Jonah and that is because she is frustrated in general about her OWN failure. Her character is meant to be very ruthless and delusional for her own gain. In TR2013, she killed Mathias with the dual pistols and never cried about it. She only kept screaming "Sam!" She impales Himiko with no doubt.

In Rise, she killed Konstantin with the knife to the heart no matter how much he tried to manipulate her about her father (the player has the choice to leave him or end him, but he is dead no matter what)

She never hesitates. She does not act merciful to him at all. She wants him to suffer in the flames and abandons him because she is very spiteful of what happened to her father and does not want to deal with him anymore. She literally says "Burn in hell." Ironically, the option to kill him directly is more merciful to dispatch him. Then Lara casually tells Ana "Your brother is dead." Also, in the end credits scene she holds Ana at gun point and is ready to kill her too.

In Shadow, she kills Dominguez with the dagger and does not hesitate at all. The only difference here is she is a bit sympathetic to him but ends him with a simple "Sorry." Lara NEVER says something like "No I won't kill you I'm better than that." She knows she is a killer and embraces it.

The only scenes I can think of that remotely resemble this meme is where the Trinity assassin breaks into her manor, but she was trying to get information out of him! Or when she killed Vladimir in TR2013 but that was self-defense and her FIRST kill! Jonah is the one who had doubts of killing people, but he is NOT the main character!

So why tf does this meme exist. I can understand the argument for ludonarrative dissonance, especially in the first game, but this meme is unrelated. OP either never played the game or did not even pay attention. It is made in poor taste imo.

Thank you for coming to my Ted Talk. If you want to know what Tomb Raider is really about join the lovely

Yea we aren’t happy about this at

I got one of the reboot Lara Croft series for free on Steam and I couldn't believe how good it was. Bought as many available as I could during the Steam Summer sale.

That's exactly what I was thinking too. Lara in those games is bordering on being a fucking psychopath.

Shadow it's not even bordering. Like the trinity soldiers are terrified of her. Then she has that whole sephiroth rage-murder scene.

Yeah that's just part of her character. A psychopath archaeologist who is a full blown mercenary. I really like the take of her character being like a female version of Rambo.

Ludonarrative Dissonance has a lot of syllables

Would hardly be the first game to act like the character has morals, only for you to slaughter your way through waves of them once gameplay starts.

Assassin's Creed has always fallen victim to this. Your assassinations try to push this whole moral angle, but completely ignores the thousands of guards you killed for no real reason.

Stop spreading lies about Tomb Raider. Did you even play the games? That is not what happened. Read my other comment if you want to know why this is wrong.

This is why I like the metal gear solid series. You can beat the entire thing without having to kill a single person. The game rewards you for it. One of my favorite sections of them all was the "battle" with The Sorrow in 3. The more people you've killed, the harder it gets. I won't spoil it any more than I have. Anyone who hasn't played it should give it a try.