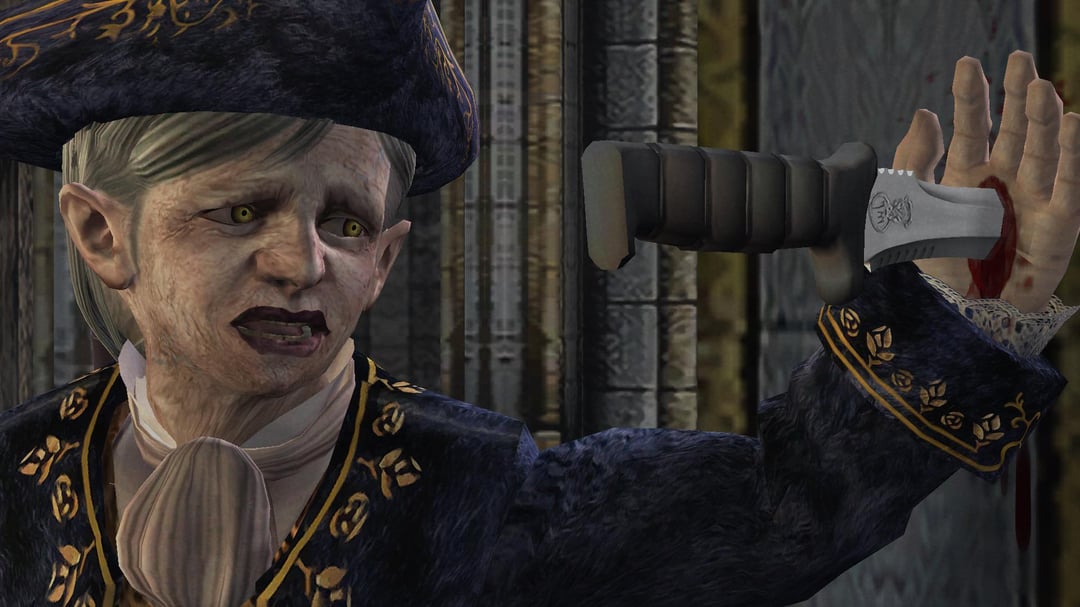 That is the face of someone who realized he F'ed up

We all died to the QTE afterwards the first time.

I was still heated from the freaking Statue, so this cutscene didn't throw me too off.

Trap door ? It's been years

They cannot push the button when you disable their hand

PUT YOUR HAND ON THAT WALL

Sir, I don’t understand! Who needs a knife in a nuke fight anyway?

I die everytime Leon says "No thanks, Bro." to Salazar when he first meets him. Lmao. I love this game.

Recently pick this up for the PlayStation 2 but I'm intimidated to start playing it because code Veronica was so freaking hard lol i will start it soon haha.

Trust me, it's easy and fun.

When an enemy is knocked down, use the knife on them.

Melee attacks from headshots and knee shots attack surrounding enemies as well. Use them for crowd control.

If you keep Ashley behind you and enemies from being behind you, she won't be a problem at all.

Do not use an upgraded mine launcher around Ashley. They WILL kill her. In fact, avoid using any explosives around her.

Check the descriptions on treasure items you get. If it says an item will fit inside, or that it might fit inside something, save it until you get the items to combine it with. This'll make you a TON of money compared to if you sold them all seperately.

On wells in the village, shoot the support to drop the boards so the treasure doesn't end up in the dirty water after you shoot it. Tons of value by comparison.

Save flash grenades for a certain "anti headshot" enemy. This is also why i mentioned the rifle critting headshots. You'll know them when you see them.

Ammo upgrades give free ammo. Good for magnums, which give little to no spare ammo from drops.

Hope you have fun, it's the best game i've ever played and i'm glad new people are still playing it for firsts.

To add to the bit about ammo upgrades, I avoid reloading magnums or the tmp unless I’m certain I’ll need it. Upgrading the ammo capacity of an empty weapon will fill it up completely.

YO thank you so much!!! I screenshot this comment and will look at it again as im playing the game! Tips like that already make me more confident starting this massive game!!!

Can confirm, these are great tips

It's definitely more forgiving. Code Veronica is far more punishing and a gamer of average skills can easily clear re4. I remember my first play through of code Veronica was ruined because I didn't know I was going to switch to Chris partway through. I had nothing good in the item box for him and had overwritten the same save file over and over. Ended up just quitting the game altogether and coming back years later.

how will this affect players who aren't using guides?

RE4 has dynamic difficulty so no need to worry about it being to hard.

Also, you can give Ashley commands to stay in place and hide in dumpsters. This will make enemy encounters a breeze and you won’t have to worry about her getting in the way.

Re4 is more user friendly

Also you can buy a better shotgun and pistol from the merchant later in the game but upgrade at your own pace until then because you’ll get lots of spending money from boss battles. And P.S. rocket launcher is a one shot that takes up lots of inv space so don’t buy unless you’ve got the XL case (inventory upgrade)

Thank you very much for the tip. I also see on the back of the case that this PlayStation 2 version might have additional weapons and missions that the GameCube version didn't have. Play as eva possibly? I've watched gameplay on the GameCube but not PS2

RE4 is waaay easier than Code Veronica dude. You even get checkpoints, so dying isn't that big of a deal. Enjoy it bro

His right hand may not come off, but his left hand nearly did!

"Your left hand stays on?!"

This was really unexpected when I first watched it, doesn’t mean I didn’t laugh my ass off though!

I laughed my ass off the first time they introduced salazar. He might be my favorite villain in video games

My brother was watching me play when I first came into the castle and he introduced himself. We couldn’t stop laughing because we legit thought he was a child dressed as Zombie Napoleon Bonaparte!

"Your right hand comes off?"

Lol, resident evil stories are so great. Nailing that little prick was so satisfying.

Salazar, you are small time

My favorite was the boss battle with Mendez. Completely unexpected and fucking awesome. Suprisingly got him down first try

I haven't played this game yet but I had to look at the scene and it's hilarious. Looking forward to this boss battle.

Why didn’t Leon shoot him instead?

Cause it's okay to show off as long as what you're doing is dope as fuck.

I understood that reference