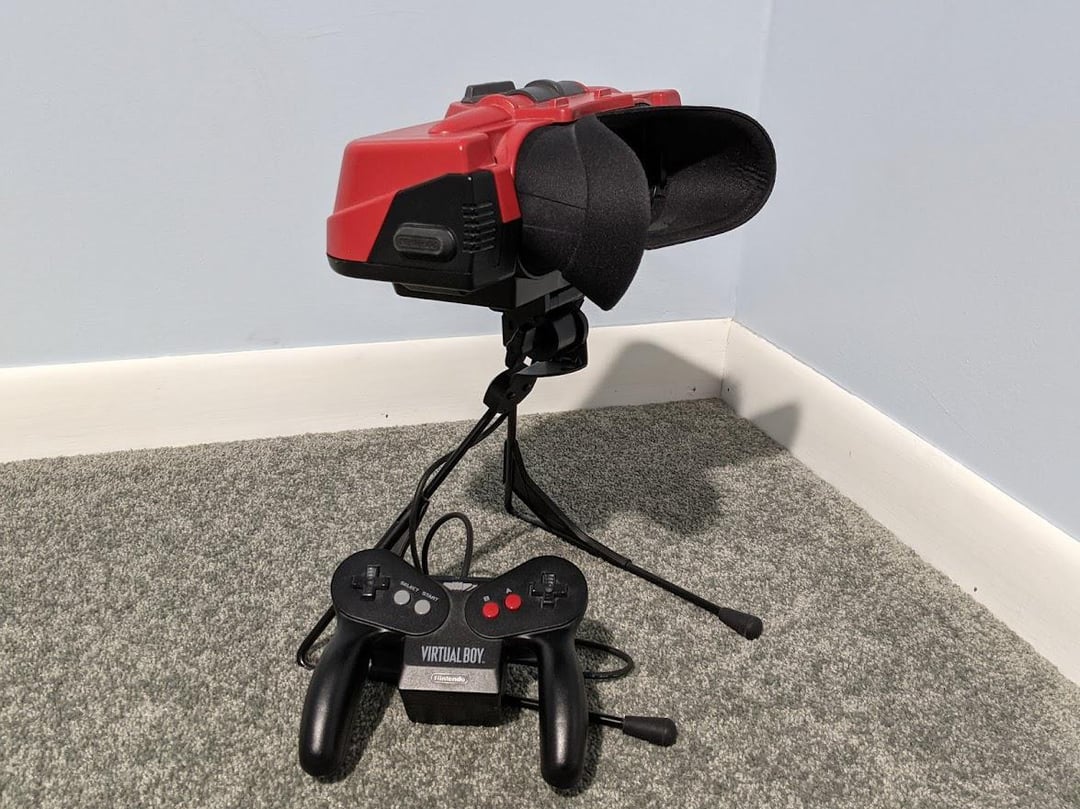 Neck breaker 5000. Loved destroying my shit to play Wario on this thing.

Man, I wish I had Wario Land. I only have Mario's Tennis.

Yeah, I sow this thing in the mall when Christmas shopping with my Gram for my dad. She said "we're shopping for him, not you." Still bought it, and used it once. It was terrible.

I still remember playing an in-store demo for Mario Tennis on one of these. I played for about 15 minutes, and regretted it for the next two hours or so.

I used to destroy my neck on store game demos, but that's because I had to look way up, lmao

Recently played it on the Quest 2, definitely one of the better Virtual Boy games.

LPT: Remove the stand and lay on your back.

Now you only need to worry about corrective lenses for the rest of your life.

"Wow, I've been really excited to try this!"

"So cool! My neck hurts, I have a headache, the game was mostly just frustrating, and I don't want to play anymore. But so cool!"

I’d play Mario tennis for hours on this.

Yeah, I ate up so many AA batteries playing Mario Tennis that my parents wanted to throw the thing away. You just had to find an appropriate position to set the thing up in and it was pretty comfortable. My biggest problem was that you could bump the battery pack on the controller just right and the system would turn off, losing all your progress.

Fun fact, this is still a lot of reactions to modern VR lol

Yeep. Just picked up Wipeout on ps4 for the vr experience, was soooo stoked to try one of my favorite games in vr. 5 mins later wanted to puke, I was so upset.

Where we’re going, you won’t need eyes to see

TFW you enter the warp without a Gellar Field.

I have a terrible headache just looking at this picture.

Omfg thats it! The first "VR" I ever saw... Same time as the first PS

I know, and at launch, it was the same price also. My parents bought me this for Christmas over PS. I put on a happy face, but I died inside.

It looks to be in near mint shape, aside from dust. I owned a few of these as they ascended value, the eye shades are usually beat to hell- yours looks perfect. The stand also breaks at the joint where the two legs intersect, if yours is in good shape, that’s a win. The two displays (one per eye, pointed at the oscillating mirrors) are prone to loosing pixels due to poor adhesive. At this age if you still have all your pixels, this is probably worth some good money to a collector.

Sweet find. I remember when they blew them out at the onset of Nintendo realizing this wasn’t going to be a home run. You could get the base unit with a game and Duracell batteries for 29.99usd + tax. Lol.

Still works, no dead pixels, sturdy base. The left eye shade is bent slightly due to how it was stored.

Regardless, I'm not looking to unload it. I've been looking for it for years now and I'm not inclined to part with it.

They are awesome, IMO. Enjoy it.

Check eBay if you end up not enjoying it as much as you remember, you may be more inclined than you think you are.

Definitely an object of power.

You'd think Control parroting "Object of Power" every 5 minutes would make people remember it. "Weird shit Appliance" is not bad tho. It has a spicy flair to it.

It could easily be an

Artifact is a red display visor mounted to a black tabletop stand. Once used to play children’s video games, it is now believed to be a telepathic communication portal to an alien race whose whereabouts are unknown.

The artifact beckons passersby via brain wave manipulation; those within 10 feet of the object report hearing indistinct voices in their heads, and a strong urge to look into the viewfinder. Observers beyond 10 feet report hearing no sound whatsoever.

In testing over a 6 month period, subjects were asked to sit in restraints at distances varying from 2 feet to 10 feet away. In all cases, the closer a subject was to the artifact, the more irrepressible the need to gaze. 2 subjects at 2 feet of distance died, one from heart attack and one from stroke. The rest had to be committed for close observation, and have undergone intensive therapy for post traumatic stress disorder. Other subjects placed at 4, 6, and 8 feet survived relatively unscathed but reported nausea and increased heart rate for several days afterward.

All subjects reported a strong sense that the viewfinder would impart knowledge of the universe unattainable by any other means, due to “our solar system’s position in the cosmos”. Some reported seeing images of themselves at every point in time at once from birth to death; others claimed to feel parts of their body they had never felt before, such as specific thoracic organs and bone marrow. One subject correctly identified pre-emergent cancer within his body despite having no symptoms; subsequent visits to an oncologist confirmed the presence of multiple myeloma in its earliest stages. Another subject suffering from Tourette’s syndrome reported months later that all symptoms had subsided. Live brain scans were unable to confirm heightened activity during these reports.

It is unclear how, if at all, the artifact communicates across the universe or with humans. No alternative theories as to the object’s nature have emerged, however, as every person who has been within 10 feet believes without a doubt that the aliens exist.

During 11 years in containment, a handful of volunteers have come forward to look into the viewfinder: twelve during the first two years, and four during the last nine. However, testing has not supplied any further evidence that the artifact is in fact alien, as all subjects were unable or unwilling to remove themselves, and remained unresponsive to questions or orders before and after being pulled away.

During the first observation, two guards were dispatched to remove the volunteer, but instead attempted to look into the finder at the same time, slowly crushing the subject’s skull from either side. They were all pulled away using a taser and a net. Volunteer #1 did not survive.

All subsequent observations were ended manually, but some subjects were allowed to remain for up to 72 hours. No subject responded to food or water. During viewing, observers noted odd behaviors such as song-like vocalizations, intoning, and speaking in what appeared to be alien languages. Subjects were highly emotional, sometimes weeping and screaming, and other times laughing hysterically. Some of these outbursts appeared rhythmic in nature but consultations with musicologists, phonologists, mathematicians and speech pathologists have failed to diagnose an emergent pattern between rhythms or similarities in languages spoken. All seemed intent on communicating with observation but no distinct messages could be recorded.

No subject attempted to look away from the viewfinder of their own volition or when requested, nor did any express the desire. All volunteers suffered catastrophic cortical damage, becoming vegetative immediately after retrieval.

Observation reports that for the duration of all viewings, however, brain activity remained unremarkable.

My neck hurts just looking at this picture

Wario Land and Boxing were my favourites ! Was there a Star Fox too? I remember playing on with a spaceship like Fox's... Can't remember much tho.

Red Alarm. We had a copy of that but it's been lost to the aether.

And the boxing game was called Teleroboxer ! Now that I google it, all I can are red lines. Aaaand my neck still hurts.

i remember trying one at a blockbuster video, i thought "wow what a waste of money"

Yeah they had one at Toys R Us and I was psyched to try and then.. disappointment.

Yeah, eyes crossing and headache after 3 minutes of demo play. They should have never demo'd the system. Probably could have suckered a few more people to buy one.

Yes but does it come with a copy of Jack Bros?

Remember when like KB Toys (I think that’s what it was called and yes I’m old enough to remember that store) had this on display and anyone could play? It had to create a few instances of pink eye.

If you whack it with a wrench, it'll turn into a level 2 sentry.

If I close my eyes long enough I can still see the red burned into my retina from this thing. I remember pretending that my eyes were fine so my mom wouldn't take it away from me. Lol. My sister complained immediately and never got to play again.

I remember when that first came out lol. I always wanted one lol

I remember seeing the ads about this on TV, but the only time I actually saw one in person was when some kid brought it to school.

I got a chance to take a peek and when I saw that the screen was all deep red, I kind of stopped wanting it.

I begged my mom for months to buy this for us and one day, super random, my mom comes to the living room and tells me and my brother if we want to go buy it. We freak the fuck out and we head to Target and buy it. Obviously, we try it as soon as we get home and I had never been sooo disappointed by a console. It was nothing like the ads, it was garbage graphics and horrible game play.

I sadly and meekly went to my mom and told her it was not great and that we should return it because it was not worth the money. She took us back, returned it and let us pick out some SNES games which were super cheap but really fun!

That was a super cool day nonetheless. I miss you mom!

I’ve only ever seen one in person like once, my brother in law had one, and I saw it in my in laws basement. Never got a chance to actually see it in action though

I remember everyone was peeing for this before it came out in high school and then one guy in our class was the first to get one. He invited me and a couple friends over to try it and we were just like “man, you got ripped off - this thing is trash.”

I thought it was floating O.O

Oh, it's a sentry from Team Fortress 2