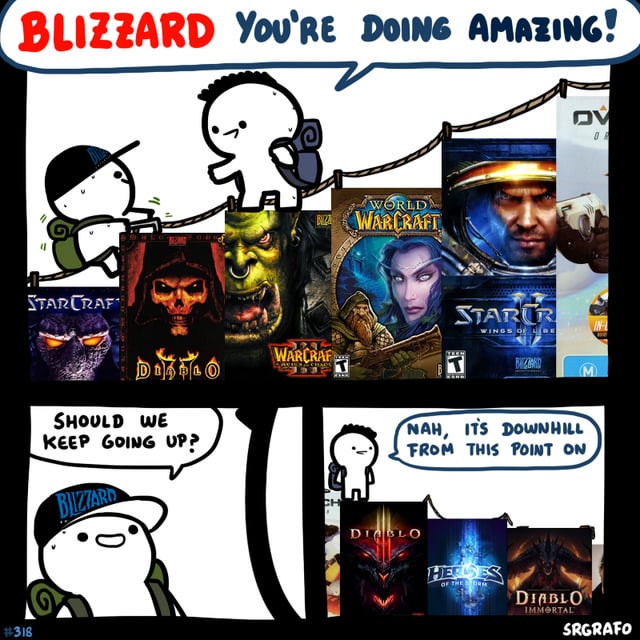 Heroes of the Storm was the beta MOBA out there. It failed because of Blizzard, and nothing else.

I do miss that blizzard golden age.

And now they are just rereleasing / remastering the old classics. I just placed the open beta of D2. It's not good.

I play a lot of hearthstone thou. Looking forward to tomorrow's patch. That game is genre defining like StarCraft and D1 were 25 years ago.

I still have hope that Diablo 4 will be a wonderful game. Diablo Immortal is also a really good game (for a mobile Diablo).

diablo 3 is a really good game tho

I still "remember" them by playing their games for free

Hey now, Heroes of the Storm ended up being awesome after everyone gave up on it. It’s a bomb ass game now.

I'll remember the fun speedruns of their games. Now Blizzard is out there speedrunning the any% run of "Destroyed Reputation."

Let's be fair, Heroes of the Storm is fun.

I never finished Diablo 3, and now there are to few players to even try... I wish they had structured the co-op a little differently because even with only a few players you still seem to be able to find people to do the full campaign in Diablo 2.

HotS is a damn solid moba. That should be a second peak. It was just too late to the party.

Overwatch is an up?

You should warcraft 3 reforged to the last panel.

WC3 was beyond amazing, both single player and online. I have especially enjoyed the online custom maps. I have spent so many hours in it, playing WC3 for 3 or so years non-stop. You could play so many creative game modes, from tower defense to races, moba, hide and seek, etc.

Extremely disappointed with the new WC3 Reforged - the content promises that were broken and the new rules where Blizzard owns all user-created content (custom maps, etc.).

Blizzard used to be great. Now they are greed. I want the old Blizzard back.

You can blame this squarely on Activision/blizzard.

Had they bought into Dota All-stars , Lol would never have garnered the attention it did.

Instead they went to valve and years of pissing contest ensued between valve and blizz on what they could actually use.

For me Blizzard started going downhill after World of Warcraft. They got complacent and took too long to release another game. Starcraft 2 and Diablo 3 eventually released and were good but had nowhere near the lasting impact of their predecessors. Worst of all, we never got a Warcraft 4 because they kept milking WoW into the ground.

Same, but for me when i saw the rising popularity of WOW i understood that we would never have a Warcraft 4, and if they ever did it would be so integrated in the WOW lore that only those who played it would understand what's happening.

I was actually surprised with StarCraft 2, quite loved the game. Same for Diablo 3 and heroes.

Then they released Warcraft 3 Refunded, and this was the final nail in the coffin for me. Same for the HK controversy whi nearly got ne to quit everything.

It wasn’t complacency. It was that the success completely overwhelmed the company. The server space they had set up to handle the most optimistic growth they could conceive of in a year was completely filled up like a month after launch. WoW blew up in a way no MMO had ever had and no one thought they could. I mean, it’s weird to say a company can get too successful, but that’s kind of what killed Telltale and all Blizzard was able to really do for years was try to get a handle on managing WoW and scaling the company up to handle its success. Add in that they had several projects that they had problems with around that time too (like canceling Starcraft Ghost and restarting Diablo 3 multiple times over ten years of development) and there was a gap in non-WoW releases.

Starcraft 2 felt great when it came out, but then they only released one campaign at a time. That should've been a big red flag that I completely ignored.

Before all the shit starting hitting the fan, I was actually looking forward to overwatch 2. Now, there's literally nothing to look forward to. I really hope the company changes for the better and people actually go to jail for all the shit that has been going on, but I'm not optimistic about it......

Same. God I loved Overwatch. Over 600 hours in it, but I can't justify O2 to myself with all the shit they've done.

It'll still probably be a hit, either out of ignorance on what they did or an apathetic user base.

At least for me anyway

Diablo is the only thing I like from them. Overwatch was fun and then became eh

And the people who invented World of Overrated.

Salty u missed out

Can somebody tell me whats special about WOW? I never played it but a lot of free mmorpgs and never got why people would pay money for something they can have (even legally for free)?

WoW did a good job at the start balancing for both casual and hardcore players for an mmorpg. The early server communities were great and full of people to play with. Dungeon and raid design has been great from the start and is still arguably the best part of modern WoW. For it's time, it was really a great game.

I played it so long because of the community that I had. The guilds that I was a part of was as big of a reason to play as the base game.

The art is great, the gameplay is super smooth, there's a ton of mods and external sources for every element of the game, it's pretty well balanced compared to a lot of other games in the genre, the subscription means there's no P2W stuff, etc.

But the real answer is that WoW was a fantastic MMO in 2004 and then once when people get invested in an MMO you don't want to just start from scratch somewhere else. WoW wasn't particularly inventive when it came out or anything, it lifted all of its features from other MMOs at the time. But it did it well, and kept players coming back expansion after expansion, and so people didn't really jump to any of the dozens of competitors that came out since then.

When WoW came out (more than a decade ago!), it was the greatest MMORPG ever made. It was just miles ahead of everything else in terms of visuals, content, community... name it.

The game sadly couldn't reinvent itself for more than a decade without a few accidents along the way and now most people will tell you that WoW is a shadow of its former self, but they're still playing to hang out with the friends they made on the game or for nostalgia's sake.

Heroes of The Storm is great.

Woah heroes is good and still alive despite blizz moving developers into a new project!

I think Diablo 3 pre nerf was actually not that bad

HoTS is still a fun game.

I'd have to agree, that diablo immortal bs really pissed a lot of people off.

I will vote with my wallet. When they sort out their horrible practices and have proven it, I will give them money again, but until then, that's what I'll remember them for.

I remember them for kowtowing to an authoritarian Chinese government.

I mean really it's our faults for not having phones obviously.

Where's Warcraft 1 and 2? Warcraft 2 was great, and even better than 3 in some ways.

To be honest, Heroes of the Storm. It's a great moba and I think a lot of people will agree with me that it is a lot of fun. It's a quality game, and the only thing about it that deserves to be crapped upon is how the company treated it and abandoned it.

I'll stick with OG Warcraft. W.O.W killed it for me