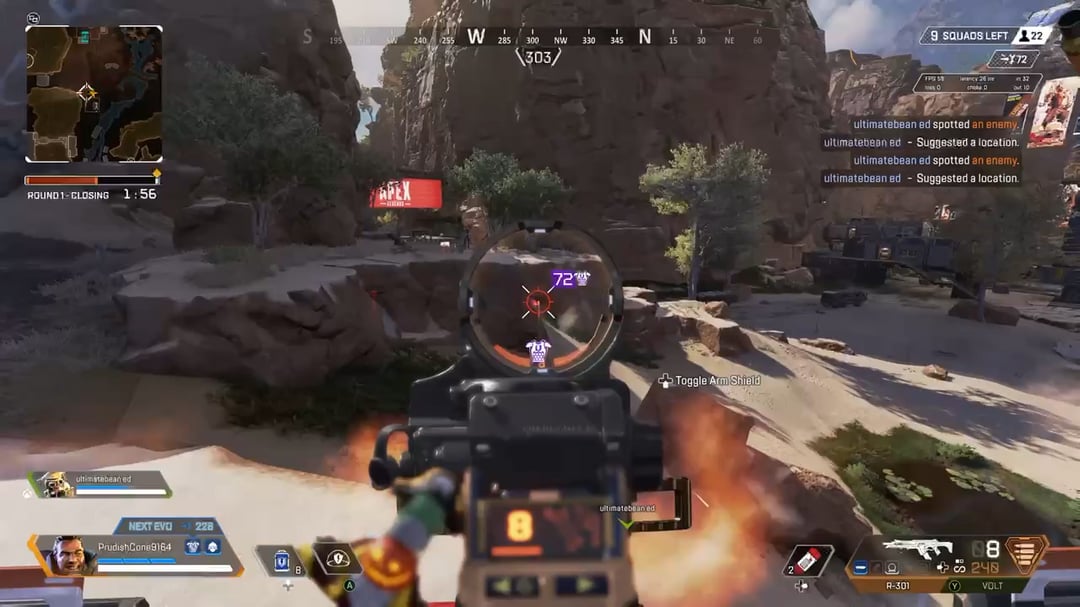 I wouldn’t have thirsted that caustic. That was your kill already, so if you hadn’t thirsted you would’ve had ammo in your R-301 still and could’ve won the fight.

Agree, same feedback I had

you (very clumsily) thirsted when you were full health instead of getting info, height, poking, or revive baiting.

I would've thrown down the dome as soon as i threw the airstrike, that way your enemies cant shoot you and won't get closer to you and your shield wouldn't have been damaged and you wouldnt have been stunned

And i wouldnt have shot the caustic, he was already downed so was unable to damage you. You wasted an entire clip on it and didn't reload, if your r301 was reloaded before the second enemy came in you had a bigger chance of winning

Downed players will mark where you are for their team. They are dangerous just leaving them alone.

You wasted your ammo unnecessarily

People are saying that you shouldn't've thirsted the Caustic but I don't think there's enough information here to say that. How many teammates did he have left? If there's a third here we don't see, thirsting him is almost definitely the play to win, and with or without a third, you likely should try to thirst if you can in order to have the armor swap available. He had a purple, and the extra 25 HP would certainly improve your odds of winning overall. So I don't think your instincts are wrong there. But after realizing you couldn't do it in one clip, I would've reset on winning the fight. Switching to the Volt to thirst is an overcommit, knowing that there are other people trying to kill you and you'll need loaded guns.

Bloodhound pings the Watson with about a second to go before she's on top of you. You can improve your reaction time by anticipating what's going to happen next in the game. Knowing that you need to be either watching for a climb-up or for someone running up the hill means you would've done well backing up even further along the left wall, and not jumping up on to the hill house platform. You could've taken height on the shed there or peaked out an angle to catch the Wattson as she tries to full Bloodhound or tries to locate you. These are easier to say with hindsight though.

Agreed thirsting is fine on that situation he just didn't get to do it fast. Maybe if he strafed a bit more aggressively he could've gotten the thirst without switching to the volt

And you could have revived ur team mate

Rezing would have increased ur probability of survival.

Only thirst to get armour swap or if you want extra dmg to get badges. In this scenario,thing happens and you can't control all of it.

When thirsting try to feint shooting from the right and then quickly shoot from the left or vise versa. If you move in one direction it’s pretty easy for the knocked guy to follow you with your movement with his knockdown shield. Then maybe armour swap to his purple.

Instead of using your r301, I would have used a thermite and then revive your teammate.

You were thirsty on the downed Mrs. Fart (caustic)

I think u did nothing wrong back there. But you should/have to/must use mastiff. I dont care about the second weapon choose whatever u want. Yes u missed couple of volt shots but who cares. Use mastiff on close encounters.

No counter move on that mastiff, lean in forward for that quick dodge then attack. I saw you move left b I t forward w/ammo ready would've won that for you.

Side note:: you were really just jabbing at the guy while he was jabbing back with a better weapon ready

You adsed in close range against a mastiff ....so try to fix that ...also you could have continued on with charging shields instead of killing caustic... I know you were trying to loot HIS shields but you ended up emptying your secondary weapon