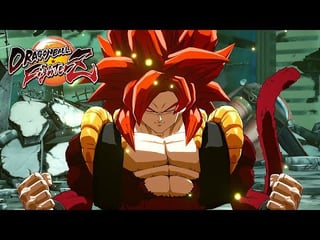 Holy shit, this gojeta SSB vs gojeta SSJ4 kamehameha was so sick!

Yeah I was really surprised by that. I guess I should have put it more of an oopsie

Man I never liked GT, or really SSJ4, but this video is straight hype.

That trailer was really intense, thank you aksys for the love letter game and seasons! Hope there's a next game

Is the difficulty curve for this game super high? I kinda want to pick it up

It is the EASIEST fighting game to pick up. It’s very overwhelming visually how ever.

What does that mean? It’s easy Doing damage, understanding why you lost, and how to get better.

Don’t try to rush the length it takes to get good at them. It’s part of the “journey”

Edit: okay so since 2 people PM’d me. Fighting games have always been less combo focus. more what to do focus. The good combos are an extra reward. Against patient players/ against players playing smart you won’t be able to get a full combo in most fighting games (SfV, MK11, Tekken7 etc). So here you won’t know what to press for a practical combo. How would you (with your selected character) do damage? You’ll find that light attacks you can usually get a hit and see when it’s “your turn” but even that’s hard cause it’s overwhelming if the opponent won’t let down. But even the light attack button’s not perfect, low damage and the range is usually bad.

FighterZ mashing light attack when “it’s your turn” leads to a full combo that does what 20% of their HP bar. And this is crucial, you can worry less about combos and worry more about playing the game. This will teach you allot. When you transition to either doing GOOD combos (40%-100% combos) or switch fighting games like injustice you have a different thing to learn and it’s so much fun getting the hours in the lab for these fancy combos.

Idk of its good, gonna stop here cause I already wrote a passage.

We’re probably at the tail end for this game so if i were i might as well wait for the sequel. The diff curve is not that intimidating cause the combos are simplified and a ton of the mechanics are well explained and it does reward you for taking the time to learn fighting game theories and such. But online will definitely chase you away from the game because of the net code and experienced players

Easy to learn, hard to master. Its one of the easiest fighting games around. Its also a great start to learn fighting games, go get it

It's really easy and fun. The only complaint I have is that most the majority characters feel very same. Mostly same specials, same combos, etc. There's a few exceptions, but I don't feel like the characters have enough difference in how they feel and play.

I'm a filthy casual though so I'm sure there's something I'm missing.

literally bought the season 3 pass and the gamme when i heard gogeta announced.... so im more than hyped for this

When he got announced, I was thinking that arcsys should like give him some fucked up shit just to break the internet like armor on his back so vanishes does nothing etc. But jfc they went ahead and gave that man an instakill, free dragon balls, double air dashes and a messed up mixup game

Game look super fun,price can be tough tho.

He can generate dragon balls at whim and will, and can also charge a custom meter up to a 7 bar to one shot a character from full.

Sounds like aids to fight when he is in a pro's hands, lol.