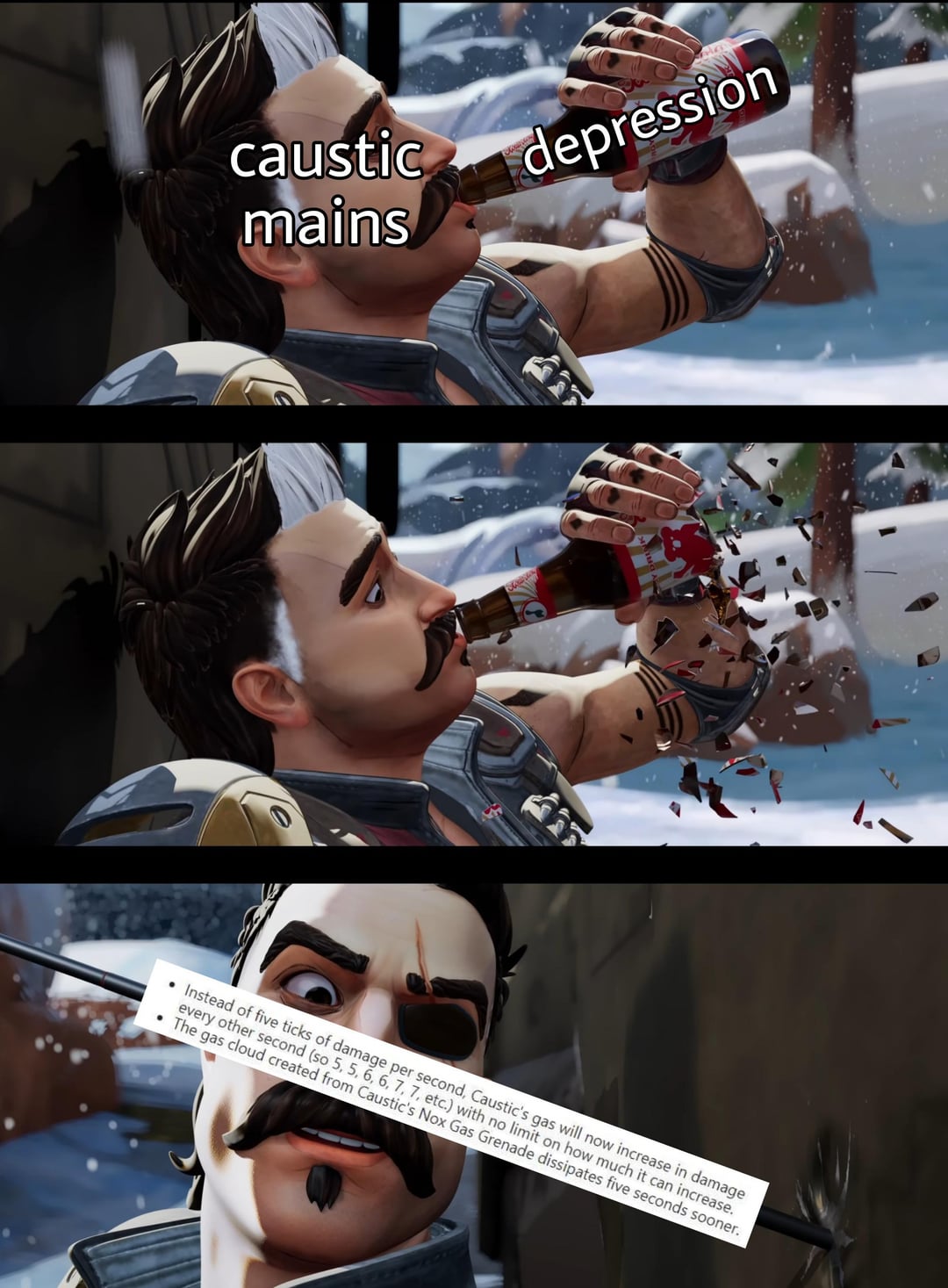 Caustic Mains: “We final got a buff! Caustic is back!”

sticks gas traps on your knuckle clusters there’s your buff

I wouldn’t say this is a buff, both will only have a big effect on certain situations

Also depends on play style. A passive caustic won’t see much of a change. Aggressive caustics will push the gas and make the most of the damage increase. With 5 seconds being shaved off of the gas, you’ll definitely need to push when enemies are trapped in the cloud to get the best results IMO.

I fell like thats the best use of his ult anyway. Temporary slowing, not meant to wipe a squad. 5 seconds shorter is nothing.

That 5 second are a big nerf.

Definitely won’t be anymore sitting in caustic gas though. That was the biggest problem.

It is a buff. The ult gas used to be nasty because of increasing damage (quadratically increasing accumulated damage). this will increase indefinitely so you definitely cannot stay in it. that's a big difference.

IIRC the gas damage never increased quadratically, but linearly, doing one more damage per second before being capped at 12.

I agree this is still a buff, especially since it's only the ult that is losing time, and I think the trap gas lasts just as long. But he will still be weaker than he was previously during the 6-12 tick damage era. This is fine with me btw, but I'm just pointing out that the fact that the damage "increases indefinitely" is not as good as it sounds maybe.

For reference, the 6-12 tick gas would do 63 damage in 7 seconds, whereas this gas will do 44 dmg in 7s. The crossover point where the new gas will do more because of the lack of cap would be at like the 20s mark or later (sorry I'm too lazy to do the math on that one lol).

So yeah this is what I'm struggling to figure out. People were upset about dying in last zone to gas so they get rid of the stacking damage then they bring it back and make it stack even higher? People were only saying it was op in situations where you actually can't move out of it because of zone and now it will be even more deadly.

Meanwhile all the defense players are over here being like idk if damage is really what we were looking for, defense should he about zoning and area denial not damage. I'm still not sure why they didn't focus the buffs on the vision blur and slow effects. We need something to deter the waves of movement legends that come to third our fights from running right at us with an R99 or Eva. I have guns to shoot things with I don't need my abilities to do a bunch of damage.

I can only get so erect.

Not anymore! With this new buff your erection is limitless!

Your erection will actually dissipate 5 seconds sooner, sorry to say.

I am still waiting on being able to break down doors with the hammer…. How can they tease that then just blue ball us?

Oh I cannot wait to terrorize these octane and Rev mains.

I’m happy to join your experiment

I shall join too see the results as well. Now I have too get back too my coffee first

Please have mercy, I’ve been maining octane before the buffs

Octane's been maiming Octane, this is true.

That's a helluva way to go!

I don't even play caustic, but as of late I literally walk thru the gas with no worries at all. Happy for you gas man mains!

This buff won't change anything for higher level play. The idea is they need to make Caustic's gas scary to push into again. If you take 5 ticks of gas (plenty for any high level team to push in), it's going to do a whopping 4 extra damage. Take another tick? No prob, you've taken a grand total of an extra 6 damage at this point. No no one with any skill is going to even care.

The only good thing this does is it puts the damage just barely high enough that if you sit in the smoke for the entire duration, you will get knocked right at the very end, but that's kind of meaningless in high level lobbies too because everyone knows all you have to do is hit a single syringe and you're fine.

Meanwhile the reduction to his ult time is a pretty sizeable nerf because his ult is used to deny an area for a period of time, and now that time is less.

What they really need to do is make it so you can't heal in his gas, and then leave his smoke as is and give it more utility. For example, they need to bring back the blur, but maybe have it kick in more for every tick of gas you take, so you don't get blinded as long as you respect the gas. It might also help if the effects take one extra second to wear off after leaving the gas. Fixing the ridiculous amount of bugs with his gas would also really help. Giving his barrels a small amount of health and/or making them inflate faster would really help as well.

Most Caustic mains don't really want or think he needs more damage - they think it needs more utility - and to actually work when and where it's supposed to rather than gas traps just magically disappearing when someone opens the door (which if you play Caustic you'll know happens all the time).

I always found the movement reduction the scariest part of his gas, even when his gas was highly damaging I'd normally die because I'm slowed and can't dodge the enemies fire. I don't think it's ever going to be a damaging deterrent to the level people want.

They should have restored the gas to it’s pretty-nerf density.

What’s the point of Caustic “seeing” in it when everyone else does. Otherwise, these look helpful making the gas more destructive and not something you rez in

100% increase to his Tactical duration is not too minor

It is, in fact, the opposite

The big question is, is the damage doubled or not?

Halving the DPS is likely to create the same problem that Caustic's nerf created, ironically happening at the same time as the Caustic buff that's addressing the exact same issue. That being: Enemies just won't care and will run through it.

I fear it's the latter. Respawn are averse to significant buffs, and they've already said they are avoiding the approach of making Fuse simply be the Legend that kills with his abilities. The chances of DPS nerf are higher than the chances of a damage buff, imo.

People are ignoring that ult buff. Vision on people who are within the circle regardless of where they are in it seems really strong.

This is good for Fuse but really good for his teammates who push with him.

Is it what I wanted? Not really, but it is a good start.

2x duration to knuckle cluster? Big damage buff if you stick it which is easy for any Fuse main.

Wait this is a nerf no? I mean the ult goes away 5 seconds sooner

Depends on the lobby you’re playing in.

I remember someone did that math, but it's a buff if you were to sit in it long enough. While I think the change is good, I think they should buff it just a bit more. The damage has been buffed, it's just that people will still run away from it.

Isn’t the second part a nerf? Like dissipate means it disappears right?

Tbh im not happy with this buff, which is a disguised nerf. People rarily stay in the gas for over 2 seconds and i rather want the vision blur and thicker gas...increased damage idk...

Exactly, you have to be dumb as jell to stay in the gas for longer than a few seconds. A better damage buff or thicker gas would be so much better to have

You’d be surprised. That’s how Caustic got nerfed in the first place. People wouldn’t stay out of the gas :). IM KIDDING IM KIDDING CALM DOWN

That's why you set up a kill zone... Tbh my best caustic games came post nerf even though I think they did it dirty.

If they are pushing you at a chokepoints or building they should have to push past 2 staggered traps.

What, I want the highlight to work when I'm not in the gas & a few seconds after they leave.

And if you keep the damage going for long enough you can reach infinity damage.

Idk. The problem with caustics gas was that it wasn’t disorienting/think enough. People are still gonna push you in the gas cause they can see you fine.

THIS. This trash "buff" won't change anything at all against good players.

Y’all call this a buff? This is weak, y’all deserve better

You are celebrating over an extra TWO hp lol. And that's only if they stay in for 4 seconds without dying or killing you already.

Until they fix the gas density bug to counter his hitbox... NOTHING will fix him.

What is the source for this?