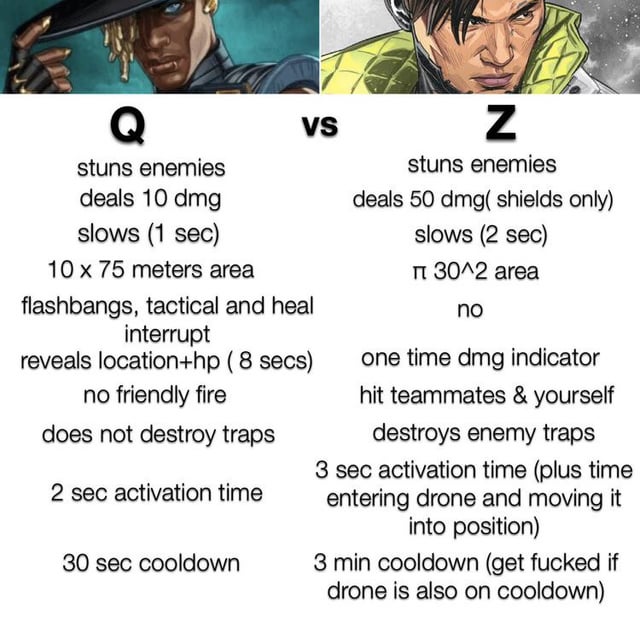 On that flash-bang part - it's actually pretty funny. The dude in charge of balancing specifically said flash bangs were bad for the game when Respawn tried to add it to Mirage's tactical. Now, Seer gets it loaded in there with a stun, scan, and ability cancel. That's not even mentioning the 10 extra damage to knock a low enemy that was healing.

It's funny how every overpowered Legend that this game has ever seen, it's always been with this guy green lighting them. Dude also green lit Horizon and we can all see how well that worked out. Not to mention the history of loaded LoL characters he put out and then threw tantrums when players didn't use his new OP stuff exactly the way he wanted them to.

they said a lot of things that seers kit is now contradicting. Remember when they said blocking healing/resing was unhealthy for the game and that such mechanic is intrinsic with the design philosophy for the game. Philosophy my ass the balancing team now added all the things they said they’d never do on a single tactical and will prob remove only one and call it a day

Petition to give crypto drone a p2020 for its own protection.

So let rampart put Sheila on the drone again

Don't say that they may very well take your advice and do it.

Like the reloading buff crypto had that was super underwhelming and missing the point.

Im really worried about powercreep in this game. Overwatch struggled with it for a while and just recently fixed it. If characters keep on being released like Valk and Seer, the older legends are just gonna become obsolete

There's a fundamental problem when releasing a new legend which you want people to unlock/buy: if the hero/legend doesn't do anything interesting, most people will not bother. If (s)he does something awesome, it makes everybody want to try it. I bet more people unlocked Valk than Fuse on release day. Powercreep is kinda unavoidable. Imagine Seer would already exist and the new legend would be Bloodhound.

PS: OW "fixed" it by not releasing new heroes. Granted, the heroes released after Brig weren't as OP, but both Sigma and Echo are still really really good.

No the problem is they keep making recon legends, we honestly need more support or tank legends

Edit: I meant to say both recon and damage, either way we need more support legends

I really thought the new legend would be a support since there's only Loba and Lifeline...but nah

Compared to the amount of damage legends, recon is pretty tame. Tho I agree they’ve released back-to-back recon legends now and it’s getting a bit excessive. I’d personally like a support, then tank, then support legend before anything else

Well I remember them saying they has work planned on Crypto but now as S10 started I only hear 'fuck crypto'.

Honestly they fucked crypto completely over with adding seer. Crypto needs some huge tweaks /rework for his abilities

Our drones need to be smarter. Auto pilot mode, pulse scan or something. Soon my brother, soon.

Ping a location and your drone will go scout it.

And then you see them make comments like these:

Moving onto a gameplay perspective, was it difficult to make Seer distinct from Bloodhound on Crypto?

Travis Nordin: The comparisons are always going to be there - he's a recon legend like them. There's similarities, but in practice, he definitely plays a bit differently. I think both Crypto and Bloodhound can guide you towards players, either Crypto scouting with the drone or Bloodhound following those breadcrumbs to find out where they go. Whereas Seer is a much more kind of close-quarters Recon information character.

Using the heartbeat sensor, you can get a read on where enemies are around you. You can use that to line up your tactical and it's a much more focused kind of cylinder or beam versus Bloodhound’s wider cone that goes out. Since it's harder to hit, the effects are a bit more potent. So, the second scan reveals health bars, which will be useful if your team is calling out ‘they’re one shot,’ you can actually know if it's a one shot or not. It also does the interrupt too, so that's another mechanic which is probably pretty spicy. And that'll interrupt any shield batteries or rezzing or basically any long press activities that the players are doing. It's on a 30-second cooldown, so I'm going to be curious to see where it settles. Do we open with the Seer attack? Or do we wait until the team's trying to retreat to heal and then we interrupt - because you probably only get one [use of the Tactical Ability] during an encounter.

With the Ultimate, you throw out that heart chamber with the micro drones and it forms the sphere where you get to see enemies who are moving faster than a crouch walk or firing their weapon. It's not a full scan though, you just kind of get these footstep VFX and a diamond lock on, so there's some counterplay there as the enemy: if you stop moving or if you are healing you're not going to be revealed.

The heart chamber he throws out can be destroyed, so as Seer you want to be smart with where you place it. Crypto has some counterplay there as his EMP destroys it, and Mirage is also a fun one – if Mirage Ults... If Seer Ults and then Mirage Ults, it's chaos; there's footsteps going everywhere as Seer’s Kaleidoscope goes off. But with the heartbeat sensor, there's only heartbeats on the real Mirage. That comes into play with Seer going closer, and if Mirage is reviving [using his invisibility passive]. you could use heartbeats to try and figure out where he is, so it's going to be interesting to see how that plays out as well.

Not to mention that if you hold out the heartbeat sensor and spin around you can tell if there is anyone within 75 metres and where they are. And all that requires is a quick 360 spin and it’s a passive as well, not a fucking drone that renders you immobile

Why is no one talking about how he gets basic information up to 250 meters away!?

Like, seriously. You ADS and see little tic markers from moving targets so far away. Bloodhound and Crypto have NOTHING on how far Seer can hunt enemies from.

Close quarters? His tactical and passive has 70 m range

I love playing as crypto but I hate being yelled at for picking him.

Couldnt have said it better myself. It’s always “bloodhound is better and faster.”

Seer is just completely busted. I mean imagine you got bloodhound scanned and had your location revealed for 8 seconds..thats literally seer. 8 fucking seconds, and they know your health...how did that even pass playtests. Crypto and bloodhound have very temporary scans, even cryptos drone makes a loud ass buzzing noise and you can shoot it down to stop it. Nothing you can do from having lil nas x sensing your asshole for 8 seconds.

And dorne doesn't have WH. Enemy needs to be in direct view to get scanned

Don't forget the range on crypto drone, you have to be so close to the enemy to actually scan that there is no way they miss it

I feel for every Bloodhound and Crypto main out there. You guys are the casualties of this war.

To be fair though bloodhound is still an amazing legend while crypto was already very meh before S10 and now he's gonna be one of the least played Legends.

Seer also cancels reviving. I found that out the hard way half an hour ago

Tf kinda stupid shit is that

Seer is basically Crypto+BH together. When I saw his abilities even in the trailer I was pretty confused as to why they would make a legend like that.

Usually I try to be understanding of devs but what the fuck.

With how the balancing is going, I wouldn't be surprised if the next legend had Aimbot as his ultimate

Yeah, it’s disheartening. Seeing a new character added with quality of life features around legend abilities that Crypto players have been asking for since early on is frustrating.

I’m still gonna keep playing crypto cause EMP go boom, and I like the information he can provide, but it just feels like I’m constantly outclassed.

Such a bloated kit he feels like an overwatch character

Don't forget that you can shoot down Crypto's drone while the EMP is going off, cancelling it entirely and disabling his Tactical + Passive for a good amount of time

Why does Seer's tactical do damage at all? It should only scan and do one other thing. I'm not sure why it has like 4 different abilities rolled into one. Either keep the blind or the interrupt, it shouldn't do both while also working as a scan.

They really need to fix the flashbang aspect of his tac. I doubt that it was intentional and it’s a death sentence in a close range fight.

I know we love to joke around 'oho more time for me to play him if randos didn't pick' but seeing him being butt of the joke, the inferior pick every time kind of discouraged me to play Apex this season. Maybe I'm just gonna grind the BP for that Volt skin and just wait next season

im gonna be honest i fuckin haye seer, i can't fight without being scaned for full 8 seconds because the time reaction is so stupidly small and don't get me started with the state of ranked is just a full shitshow

DZK be like : I donno man seems pretty balanced to me

3S timer on Ult and positioning means I rarely use it. Maybe it’s because I am bad.

Still having a lot of fun, but sometimes managing the drone is quite a challenge.

It doesn't damage teammates, but it does slow them.

Seeing the dev responses to buff suggestions for crypto are honestly the saddest thing I’ve seen since the Iron Crown event.