Look's like the trader stock of these items has shrunk massively, with more than an hour left till trader restock, ragman is out of nearly all his armour and rigs. Hope you stocked up or don't mind picking idea rigs off scavs! 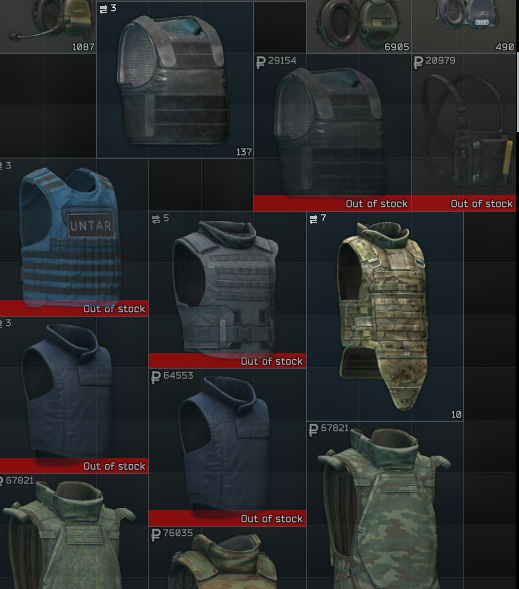 Hard to say if this is the dumbest event yet. There have been quite a few PepEvents at this point, but this might be the stupidest. I feel really bad for new players that even the items at level 1 traders are all limited/sold out. Please stop getting high before coming up with event ideas

This really sucks as a new player. Been playing without a pack all day…

People pearl clutching over this are hilarious. Just scav run, its a near zero risk way of getting shit.

Neat when you have tasks that require specific armors.

Scav runs for this lame idiocy I guess.

Kill a scav and take their backpack wth

Why do that when you can play as a scav, extract, and use what they had for your next run

Cant wait for ammo shortage event so we can just beat eachother with sticks.

Horrible event honestly, top players sitting on millions of rubbles can buy anything on flea while plebs have to do pistol runs now. If someone want to go naked without armor or rig - they can by simply not equiping such gear, go on have a challenge to spice things up. While proggress of low level players grinds to a halt since going to hightraffic locations to quest or loot is pointless - without armor or rig to store magazines for guns youre already dead (and where youre gonna put all that loot anyway ? you dont even have a backpack!)

Event only affects low level players while top ones dont care. Better event idea - you can go (but dont have to) into a raid without rig or armor, collect armor and rigs from dead enemies and give them to ragman for some rewards. Some sort of bonus community quests.

But no. Instead we got a 2 day (I hope at least) paywall - no armor or rigs for you, brokeass, unless you buy it on flea where Berkut costs 4x the original prize.

I cant play Tarkov this weekend it seems.

ive legit NEVER had to buy a backpack or shitty (below lvl 5) armour, Im usually throwing them away to ragman lmao

And thats not from players either, this is all scav runs.

play your scav when its up and get your scav karma up, I spawn in with a rifle, backpack and lvl 4 armour majority of the time and my karma is only at 2.21. Playing interchange as a player scav is pretty safe and I bang out fetch quests at the same time. It takes 15 mins to 30 mins(AT MOST, its rare to get a time left in raid above 12-14mins for me) to do a run, and that is WITH loading times and launching tarkov added in.

If you dont know how to get your scav karma up fast: Take paid extracts, Play your scav and live, and dont shoot other scavs. There are other ways but these are the main ones Ive used to raise my rep.

Adapt and quit being such a beta lol, the game can be played in many different ways. Rat on reserve if you have to, only thing a budget build actually needs is good ammo

Unpopular opinion: these events are so simple to do from a developer standpoint and do absolutely 0 when it comes to the fun of the game. They should REALLY look at where they put their resources at. I can think of 100000 things that need more attention asap instead of some event to keep us busy, hiding the fact they haven't released or added something worthy for a long time.

Lol as if people were actually wearing anything decent anyway. More than 80% of my kills are barely worth looting. This is one of the only games I've played where events actively make the game worse and gear makes no sense to wear.

Double fucked how? So confused.

Smaller stash, less armour horded (is I think their point).

Worst event so far. Is the intention here to just make people not want to play? Because that's what it's done for me...

I heard there is some kind of Space Tarkov game out that might be kinda fun.

Honestly not even a bad event. Armor is useless anyways so it doesn’t really make much of a difference

Armour being useless? In Tarkov? Never. The ballistics infrastructure in this game is literally FLAWLESS. I’ve had someone shoot me with 20 lapua rounds in my diaper helmet and I still lived to tell the tale.

This is actually sick; lower tier ammos now have a reason to be used.

Somebody, get this man away from the game please, let us play with peace already...

Kids mad that the game is hard lmao

They don't make it hard, they just make it annoying. What this essentailly means is that most people will just play hyper passive or just refuse to play outright.

To be fair, this isn’t exactly a permanent change so it’s not a representation of how the game really is.

You're an idiot. These changes do not make the game harder.

Considering getting good tier armor is 8ntended to be extremely difficult it's not a bad idea to let people experience that now. If you think the game enjoyment relies on being able to run good gear and decked out guns then you bought into the wrong game. Current gear, mod and weapon availability is super high for testing purposes alone

But what about the bad armor. Like paca. That is long gone too.

It’s amazing how few people seem to be aware of this. This games player base is gonna be culled once the final iteration of this game is rolled out. If we ever see that day anyway.

I'd rather play geared, vs other geared players, who have actual balls to take risks.

No fun murdering hoards of poor ass lame junk looters like you. Waste of time and ammo.

Send yourself away from this game.

Scavs seem to spawn without backpacks and with either scav vest or idea rig...

This is why I stacked up on numerous Lvl 4-6 armors. I had a feeling this was coming after EFT posted that TikTok

So happy I bought a ton when it was low now.

a shortage of everything?

wonder where they got this idea.

Holding a small stockpile of good armor due to just finishing my blueberry scav capping spree. Gonna be hitting these raids like The Invincible Iron Man, mags full of hollow points for all you fools selling your good stuff.

I was running silly gear last night doing my dailies. Glad I didn't lose it, I'm not paying 400k+ for a fuckin slick lol

Just got a slick from a stash last night. Slapping that puppy up on the market.

BHHaha, hoarding pays off again. I've got 14+ t6 armours at more than that in 4 and 5s. Be able to easily ride out the weekend.

YES! I've been stocking up on tagilla armors for the last week or so, turns out that was a good call! 😀

lol this would be fun

Saw this this morning, this is a great event though of course as usual the rich are simply not going to care. Not letting it bother me though, I really enjoyed going on a scav run and being excited to find an AVS and extract with it!

I have like 8 sets of tier 4 armor anyway so it’s fine.

cool see you next week when this shit is over. these "events" suck ass