Refreshing the thread as we've got a new hotfix (0.12.12.2.16165) and some issues have been addressed. Please update your game client to the newest version.

The original thread can be found here. This post will be updated with discovered issues and bug/issue threads will be redirected here.

We have installed an update containing several bug fixes and changes. The game will not stop, however on servers undergoing updates raid time may be reduced to 10 minutes. Please download the update via the launcher.

● Fixed an issue due to which players could lose reputation with traders after completing the quest "Chemical - Part 4". The lost reputation will be compensated soon;

● Fixed and revised sniper fire zones near the lighthouse on the location of the same name;

● Fixed geometry of the river and ponds at the Shoreline location;

● Fixed a graphic artifact (flare) in the Hideout when the Resampling 2x, 4x option is on;

● Improved splash effect when shooting at the water;

● Fixed lighting on the grass during rain when the SSR option is on;

● Fixed an issue due to which the USEC safe was opened with a different key;

● Fixed an issue due to which Shturman could take unreliable cover;

● Fixed an incorrect value when displaying the gained experience after a Run-Through;

● Fixed an error that could occur while inspecting a barter item;

● Rogues will now react to Scav-player presence at a larger distance;

● Rogues will now give players less time to retreat after warning them;

● Rogues will attack without warning any player who gets too close to a stationary weapon.

●Many players are experiencing lighting issues an their raids getting super dark. Submit a bugreport and comment with ticket # and anything you might think is helpful (video card settings ect)

There seems to be an issue with AMD users and graphical issues causing the lighting/shading to be jacked up with large areas of the game looking very dark. Weather effects seem to exacerbate this problem. Potential fixes: Switching texture quality to another setting and switching it back. Roll back graphics drivers. Clear your game cache.
Rain has been disabled until the issue can be resolved

what about XP for daily quests? was that fixed?

then it reverted after going to character.. back to lvl 14

lol thats a kick in the nuts

Can confirm. Past 4 scav runs have stayed at session start screen. Wtf

For some reason about halfway though a customs raid my character basically went colorblind and nearsighted it was like everything was in shadows and greyscale. No idea what caused it. Had changed some graphics settings on my monitor two raids before, but it had been fine and even when I turned the monitor settings back off, the game stayed messed up.

I just had a very similar experience on woods. I thought my GPU was dying until I alt tabbed. Mine was like the bottom half of the map was night time and the upper half was day. So there were blue skies and clouds but on the ground everything was super dark. I have some screenshots that I'll post if I ever find them

That happened to me on lighthouse

Just had that happen on Customs, was it raining in your raid? That's the only thing that changed in mine.

Happens everytime it rains. You guys on amd also?

Just had something similar happen on Customs, the raid before it was fine. But this time I loaded in and could see nothing, as if there was no lighting on ground level. High objects like tree tops and the smoke stacks were fine, but the only "visual" I had on the ground was reflections.

REQUESTID#13193675#, the only thing that changed between my last raid and this was that it started raining in-game.

its happening when is raining or is foggy

Happened to me too, at the start of the raid everything was good but suddenly everything started getting dark slowly rising up

All quests suddenly failed at the same time. Even the quests that can't be failed.

What about hunting matches? Are they bugged? Literally none of them are sold on the flea market, and I can't find any (looted dozens of stashes, cabinets, jackets, sport bags, etc). I need 2 of them to progress with the hideout, but I'm not willing to barter 500k roubles worth of keys for each...

They're just not spawning in containers sadly. You have to find a spawn where "flammable" items can spawn, which is a very limited set of spawns.

Sounds man. Audio is so wack right now it’s wild. I killed a dude today on customs because I heard him opening file cabinets in the 3rd story of the dorm and I was literally in the adjacent building and sniped him through a window. I could hear him slowly crouching around as if he was right next to me and then realized he wasn’t even in the 2 story.

On some maps I randomly hear single shots or what sounds like fully automatic gunfire that cuts out after 2 shots. Really hard to explain how it sounds like it cuts out with no echoing or anything, sometimes I hear that first pop of a grenade but no explosion. Lots of times has me stalking around looking for a sniper only to realize it’s phantom audio.

Buddy’s and I cleared the map on customs yesterday and we were still hearing the same glitched sounds.

The worst one was we were on reserve and a FULL FIREFIGHT happened in the ground floor of a building and we were on the roof and didn’t hear it! Went down there and found a dead player and 3 dead scavs. Crazy. Audio is like the most important aspect of a shooter like this and I really hope they’ve got some fixes on the way.

Edit: also my trader rep just plummeted and a bunch of quests failed for no reason at all lmao wtf

Edit 2: also want to point out that this patch an hour ago wasn’t for audio issues which is why I’m pointing it out here

same for me, i started randomly hearing scavs yelling out of nowhere but it cuts off like after 1-2 seconds. It scares the shit out of me every time.

Game is black and white on AMD Gpu's. Unplayable atm..

What is the extent of this bug? I just turned in a single lightbulb for Mechanic and I confirmed I got the exp for turn in.

Have you ran another raid? it will show you get the XP, but once you do another raid the XP is gone

Game is completely unplayable with AMD GPU's. Can't believe I bought a 6900XT to sit around and kick fucking rocks.

Still, EOD upgrade not fixed and no announcement for such thing? When people pay real life money and don’t receive what they paid for, that’s not a good thing.

I've just had the AMD Graphics bug happen to me. Clearly has something to do with the fog. My game went back to normal for a minute and when fog reappeared everything went back to dark matter.

Here's a clip from my twitch account of the bug.

How about the darkness that overtakes 80% of the map from the ground up making it so you can't see shit?

Lighting issue for me as well. AMD graphics. Feels like I'm in a Sepia movie lol. Started when the rain started.

The magnification scopes are bugged on interchange, the optic image is very, very dark even there is day time.

Can confirm this one. Had to run my ass out of interchange because I pulled up my scope and was staring into a supermassive black hole

Very annoying definitely in the dark parts of the stores. It’s pretty much pitch black had to have my friends light up the areas with flashlights just to see

Yeah lost 2 loadouts before I realized it had to be every scope. Dark spots outside are pretty much black. Hard to return fire.

Been having the lighting bug.

EDIT: This started today, and has happened in every raid I've been in. For each one it has been raining.

I handed in a Daily Task (find the TT)

Got level 15 - could see items in Flea market, went to buy something, -Error message "you are below required level 15"

my level reverted to 14 and lost the reward XP

Some Zen 3 CPU users are still having a horrible time loading loot:

I've also completed Postman Pat Part 1, but the 'Complete' button isn't appearing from Prapor for me to hand in the task. 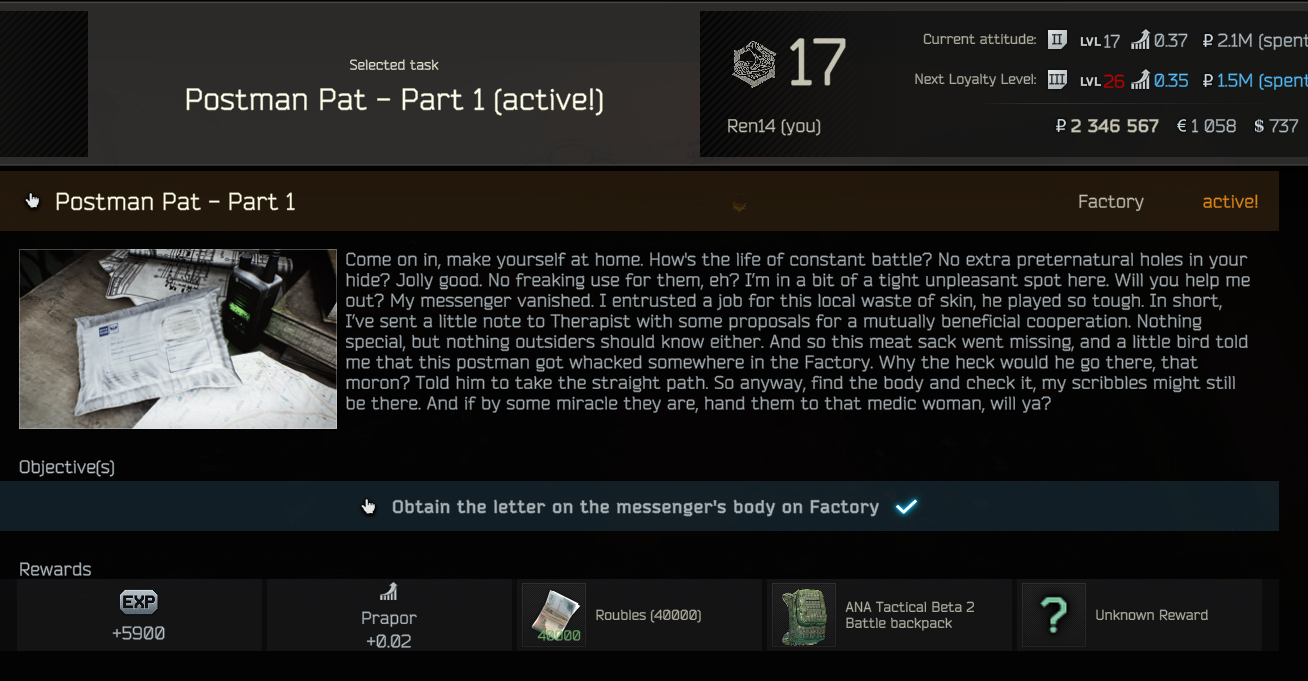 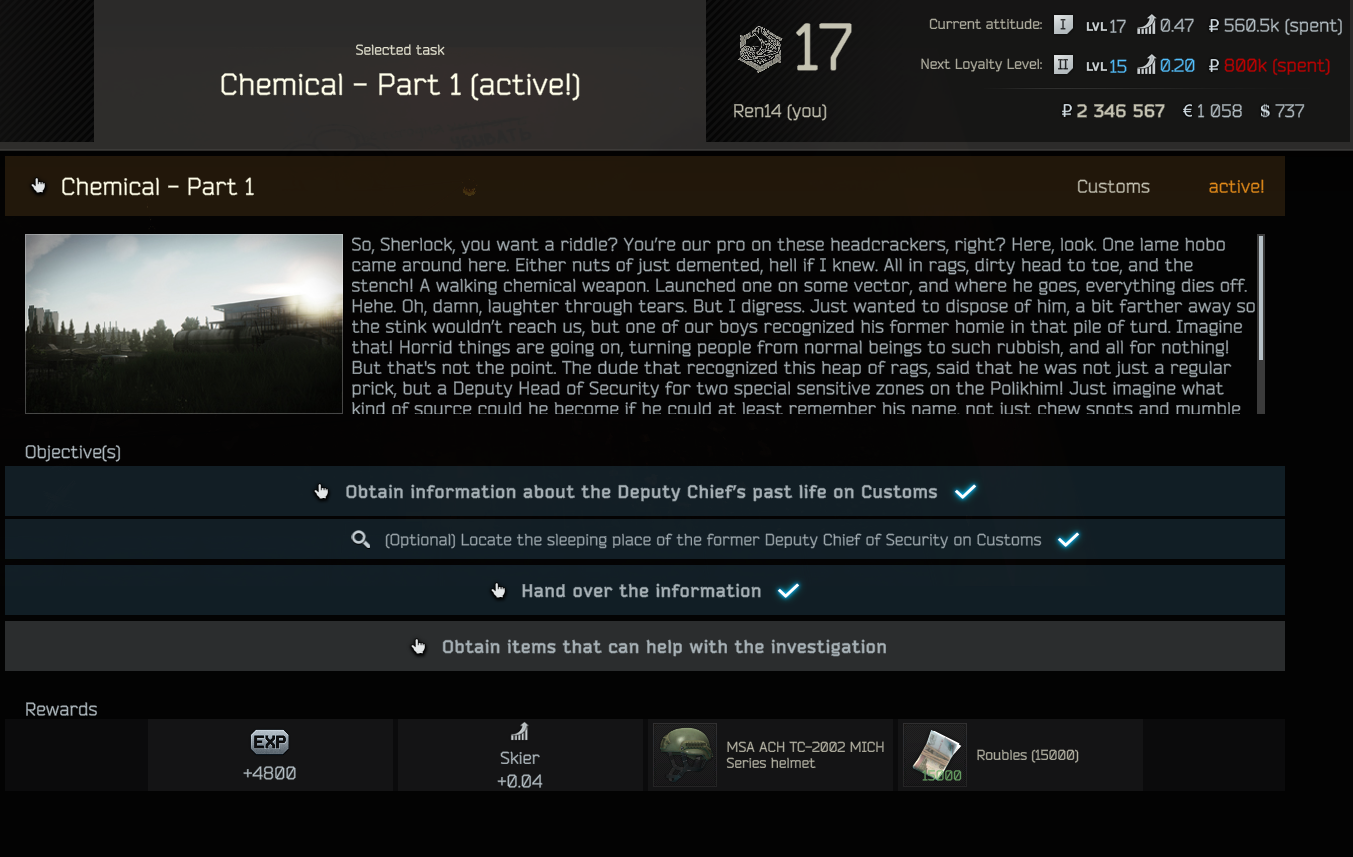 Any info or help would be ace, or just if you've encountered it too! I relogged and left it overnight.

Add to the thread on the main forums for those with an AMD card to get more visibility:

Why would my game look like this? Only started today, everything was shaded properly a couple of days ago. Did the usual stuff like update drivers and cleared the cache.

Issue with AMD GPU while it's raining, game becomes unplayable due to everything looking like it's covered in a coat of black tar.

Menu is super slow. Anytime I click something the response takes like 6-7 seconds. Moving items in stash, trying to insure gear, accepting quests.

Can we upvote the AMD darkness issue so that will get fixed? The game is unplayable with any weather other than sunny. Please turn off weather effects until this is fixed BSG.

After that extract I just ditched my items and tried to die, but after ditching my items, with 2-3 minutes left in the game, the match ended. Arrived back in the main menu with my kit intact as though the raid never happened.

I didn’t have any loot on me, so it was fine, but I can imagine a guy that found something nice would be rattled