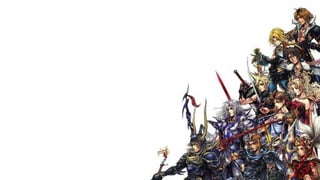 Are you curious where to begin? Which version of a game you should play? Are you stuck on a particularly difficult part of a Final Fantasy game? You have come to the right place! Alternatively, you can also join /

's official Discord server, where members tend to be more responsive in our live chat!

If it's Final Fantasy related, your question is welcome here.

Remember that new players may frequent this post so please tag significant spoilers.

Useful links FAQ Where should you start with Final Fantasy? Version differences for each game

Does Final Fantasy IX on steam (or other key sellers) go on sale often or at all? It wasn't part of the Autumn sale and I was wondering if it will be part of the winter sale.

Don’t take my word but check. Why not pay for gamepass on the pc. Like $10 for the month and crazy good games. Bunch of final fantasy games are on there and are expected to all be on there eventually. As well as the xbox exclusives and so many good games. Halo is dropping tonight

What are your NON-FINAL FANTASY games that y’all recommend others to try out that are similar? Let’s avoid the big names like Dragon quest, tales games etc. both old school and new style of games.

Lufia 2 is a stellar game, although the puzzles can drive you mad. It's got a weird plot mechanic going on though, where it is a prequel for Lufia 1. However, it's such a step-up in terms of gameplay (Lufia 1 is pretty grindy), that it's hard to go from 2 to 1. Lufia 2 also has a game-within-a-game - The Ancient Cave, which is a roguelike.

I will second the recommendation for Earthbound, although I think it's probably properly rated now, given how popular it is on the Internet. Its fan translated sequel, Mother 3 for the GBA, is a bit less fun to play for me, although it packs even more of an emotional and plot punch. Breath of Fire 1 is a pretty decent RPG that I find a lot more playable than the sequel, which requires a lot more grinding and is full of Engrish.

The Phantasy Star series of games were kind of mentioned in the same breath as Final Fantasy in the 16-bit era - probably because both series were "locked" to one platform at the time, Nintendo vs. Sega. The fourth game is really good.

Non-16 bit era, the Suikoden series is excellent, although some people aren't as big into the "catch them all" aspect of the recruitable characters. Shadow Hearts 1 and 2 are excellent, although I have no clue how easy the games are to acquire legally now, if that's a concern.

Action RPGs - Secret of Mana has flaws, but it's a really fun game, especially the first third, when there is less emphasis on magic spam. Likewise, Secret of Evermore isn't perfect, but it's goofy, fun and meta at various points. Cross Code is a recent game, but it feels very old school, and it's probably one of my favorite games of the past five years.

Strategy / Tactical RPGs - If you're into FF Tactics and/or Fire Emblem, then Shining Force 1 and 2 (Genesis) or Vandal Hearts 1 and 2 (PS1) are worth checking out. After that, Disgaea will either overwhelm you, or dominate your life for a period of time, given that you can get characters up to Level 9999.

Beyond the Beyond on PS1. 7th Saga on SNES (if possible, google how to get the normal mode version if you are playing on emulator if you find it too difficult because the US version had difficulty increased), Earthbound on SNES (huge fan base despite low sales at the time of release), Lufia & Lufia 2 on SNES, and Breath of Fire on SNES (Breath of Fire 2 if you are ready for harder and bigger game), and Breath of Fire 3 on ps1.

I'm planning to play FF X-2 HD Remaster on PS3. I played the original X and X International on the PS2 and never again. Do I need to play X all over again on the HD Remaster? Is there some sort of content on X-2 that needs X to be finished first? Or can I go directly to X-2?

Nope, they're fully separate games and nothing carries over, you can start on X-2.

How many of the Final Fantasy games have fake walls you can walk through?

the canon series: 9 games have the hidden passages.

I’m playing Final Fantasy XII Zodiac Age on my PC with the Struggle for Freedom mod (for the difficulty increase and original PS2 license board), and Generous Montblanc mod in New Game-. I just finished sunstones and Penelo left, but I still can’t get anything from Generous Montblanc. I can only restart the game. Is there a certain point where Generous Montblanc’s features becomes fully available? Or is it incompatible with New Game-?

Ff7 series: not sure if it's ever addressed or mentioned but why didn't the Turks/Shinra hunt cloud more aggressively after his "reappearance" in Midgar? Considering they killed Zack to cover up the Nibelheim incident, I'm sure most if not all of the top brass would know of Cloud's identity. And even if it was Hojo's secret experiment, when rescuing Aerith/Red they crossed paths and Hojo should have recognised Cloud and thus should have acknowledge that his experiment on him worked and would want to secure his body for science no?

Given all of Shinra's interactions with Cloud to that point were that he was near comatose, I don't think it's a stretch to say they didn't recognise him.

Hojo was more interested in seeing if the Jenova reunion would take place so even if he did recognise Cloud, he wouldn't try to stop him.

I've played almost every Final Fantasy. There are currently 3 that I own but haven't played yet. Any tips to help me decide which one to play?

13-2 was my favorite of the 13 series. Mainly because you can have the slain monsters as partners. And had a cool mechanic of infusing monsters to get a better skills. Don’t ask me about the story I was so confused on linearity. But I enjoyed the gameplay wise of it as well as the characters.

So replaying FF4 3D remake, any tips and things to look out for?

Is that the version with Augments? If so, since it sounds like you've already played through the game at least once, it helps if you consult a guide about how to optimize them. If not, then some of the end game battles are much more difficult, because you don't have access to things like Wall-piercing magic and multi-cast.

If it isn't that version, or, if you're playing on "normal" difficulty, then you should be OK. FF4 is a pretty standard RPG, and except for a couple of "puzzle" bosses that require good usage of Wall or special strategies, you can usually overcome a boss by gaining a few levels.

Biggest tip I would give - Don't be stingy with magic, especially early game. It's pretty boring to just have Cecil whacking away at things, and it prolongs combat. You come across plenty of save points and the world map quite often, so use your Tents. Each Chocobo Forest has a white chocobo that restores MP, or, allows you to take a yellow chocobo back to town to top off. My most recent playthrough, I had 17 ethers and 10 ether2 at the end of the game, despite using them plenty.

When it comes to magic, middle and late game: Virus / Bio and the Mist Dragon are both far more useful than they seem, because they cast quickly and many enemies don't have resistance to them. Use these against normal enemies, and save the better magic (Leviathan, Bahamut, Level 3 elemental spells) for bosses.

Hey all, I’m finishing up my run through of FF7 and it’s been like 20 years since I beat Ruby and Emerald Weapons as a kid, and I’m thinking about taking them on again. But I’m more limited on time now, and really only want to do it if it isn’t a massive time investment.

What’s the fastest way to go from finishing the story to being ready to take the Weapons on?

What do I actually need (supply wise)? I know I’ll need Knights of the Round then Mimic, but do I need anything else?

About how much time can I expect to need to invest into preparations between grinding and collecting key materia/weapons to be ready?

Thanks for any help!

What would y'all say is the definitive version of FFV?
Should I do the PR version or one of the older ones?

I have not played PR and don't plan to, so you can take my opinion with a grain of salt. I did play FFV Advance, and I really enjoyed the bonus dungeon, which apparently is not available on the PR, so I would tentatively suggest the Advance version instead. I'm also not a fan of the user interface on PR, but that's just me.

I want to enter the Final Fantasy Universe.

I want to enter the Final Fantasy games and universe from somewhere. I have a Playstation 4. Which games should I play in which order and what is the story connection between them ?

Can you explain in detail ?

The games as numbered by Roman numerals are all separate from each other. There's no overarching story and they all take place in different universes. e.g. Final Fantasy VII and VIII have nothing to do with each other.

That being said, you can start with any of the games in the first category without missing out on any story. Generally Final Fantasy X is considered a good place to start for players new to the series, though if you prefer something a little more classic, Final Fantasy IV is where most of the tropes really started.

Personally, since you mentioned having a PS4, I'd recommend picking up the X/X-2 HD Remaster. X has a pretty serious (if not sometimes silly) story, and X-2 has a more lighthearted feel to it. Together they'll give you a good range of what Final Fantasy can be.

I’d say FFIX is a great place to start. It’s quite the grand adventure, however a bit more cartoon’ish than some of the other more realistic looking games like VII and X (and onwards).

Hi FF fans! Looking for recommendations for which titles I should try next.

XII for the world design, story, job system and gambits

XIV for the music, gameplay and instance contents.

Some other RPGs I love are Dragon Quest VIII, Dark Clouds 2, Bloodborne and Monster Hunter World.

I think you might as well finish out the "modern" FF games, and give 13 and 15 a try. Both are pretty affordable, and while they can be polarizing to some people, they both have plenty of fans too. I always find it easier to kind of stick in the same "generation" of games, vs. going from like 15, to 7, to 12, to 4.

For similar reasons, when you look into the other games, I'd recommend starting with 1 (NES), 4 (SNES) or 7 (PS1), and playing that era of games out.

Also! You should definitely play Final Fantasy Tactics at some point, since when it comes to plot and world design, it's normally a favorite among FF fans. It is a tactical / strategy RPG, but it isn't incredibly complex.